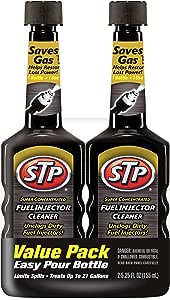 4.5 out of 5 stars
4.5 out of 5
305 customer ratings
How does Amazon calculate star ratings?
Amazon calculates a product’s star ratings based on a machine learned model instead of a raw data average. The model takes into account factors including the age of a rating, whether the ratings are from verified purchasers, and factors that establish reviewer trustworthiness.

SJK
5.0 out of 5 stars STP 78577 Super Concentrated Fuel Injector Cleaner - 5.25 fl. oz. (Pack of 2)
Reviewed in the United States on December 4, 2017
Style: 2 PackVerified Purchase
I add this STP concentrated fuel injector cleaner to my trucks gas tank every few months to keep the fuel system clean and keep moisture in the fuel from freezing up during cold winter weather. I've been using it for years and it seems to work well. Each spring, as part of my routine annual maintenance and tune up, I also will slowly pour some down the intake with the engine running to help keep the cylinder heads, valves, oxygen sensor and catalytic converter clean. I would do it a day before the tailpipe test for annual state emission inspection and never had problem with passing the emissions test.
Read more
7 people found this helpful
Helpful
Comment Report abuse

Ronald Domino
5.0 out of 5 stars It works miracles
Reviewed in the United States on December 20, 2019
Style: 2 PackVerified Purchase
Used this in a 2005 Nissan frontier xe with 185k the truck had the dreadful p1273 emission code I checked all that applied to the code new o2 sensor fixed all vaccum leaks checked for exhaust leaks put s new fuel pump and mass air flow sensor in and also reset the computer correctly to make the code go away and the code kept coming back the next thing I didnt change was the fuel injectors and that is very pricey so I bought this cleaner and put it in at a quarter of a tank and filled my tank up to mix it together 2 weeks later I have another quarter tank and the light goes off by itself and now im getting better gas mileage and acceleration and no more emission code if you have dirty injectors dont replace them try this additive frist.
Read more
2 people found this helpful
Helpful
Comment Report abuse

Chris Yturralde
5.0 out of 5 stars Brought back to life
Reviewed in the United States on July 19, 2017
Style: 2 PackVerified Purchase
OK, so I got hold of my runaround a year ago. A Clio 1.4 16v Mark 2 Phase 1 - the one where the bonnet flies open (touch wood, hasn't happened and I've regreased up the catch mechanism). It's a 2000 model, so it's getting on a bit - 17 this year, however going by the odometer records on the MOT, this had only done 4,000 miles until 2013. The story is the original owner, being an elderly lady, got fairly ill and never used the car after this fact. It sat for 10 years in a garage. My neighbour bought it, done the full works on it (new breaks, timing belt, tires, you-name-it). She did 20,000 miles on it. It began to fail to start and so she laid it up where then I bought it off her. (Not a bad deal considering she took $100 for it!).

It turned out the starting issue was a dirty/faulty TDC sensor - a common fault on this motor. A quick clean and it was like brand new - until a coil pack went. Replaced all the coil packs, and plugs while I was at it (still had the original Denso ones from 2000 in it), with decent OEM Valeo ones and Bosch plugs and it went back to running ok-ish.

The engine had always been a bit rickity, as if there was a missfire, and always a stench of fuel. Mileage was only at 26mpg - rediculous. So began to suspect a bad injector - stuck open - as I couldn't find anything suspect on OBD readouts. Thinking that since this car had sat for 13 years doing nothing, it's probably gunk in the injectors or injector rail.

This is where this comes in (Finally). I was very suspect this would do anything - it's only an additive afterall, so I threw a full bottle in a half tank of fuel (it's a ~10 gallon tank). Well, it's been a few weeks, and I went through a second bottle too (may as well as I got it elsewhere for a good price), and I'm now getting 40mpg. What a difference. The car no longer idles badly, it starts perfectly fine (previously it would seriously judder after a start), and I'm getting far better reponse from it.

It's saved an awful time consuming and costly fix, so I can't praise this stuff enough. In the last year of me having the car, It's been a job sitting in the back of a long queue of DIY jobs that I was dreading to get to.

I doubt it would do much for a perfectly fine running engine - but if it's not, and you suspect the fuel delivery system, this may just do the trick for a fraction of the price and effort.

I'm more than happy - a $100 car, with two previous owners, with only 24,000 miles on the clock and a body in mint condition. Can't be happier than that - especially since this stuff brought it back to life and running like brand new!

Now, just to get the Air-Con working (I suspect the expansion valve for much the same reason - gunk!).

Techie
5.0 out of 5 stars Buy it.
Reviewed in the United States on November 21, 2019
Style: 2 PackVerified Purchase
My driven mileage per galon is back to normal. I purchased this Fuel Injector Cleaner because my mpg dropped significantly lately and I was not sure what is causing it. There are many things that could impact the mpg but the easiest thing to start with is cleaning your Fuel Injector. This worked for me and I am glad it did because now I am sure it is not something else that was causing the issue. The price was surprisingly good compared to a local store.
Read more
2 people found this helpful
Helpful
Comment Report abuse

pen💮
5.0 out of 5 stars Works great.
Reviewed in the United States on May 17, 2017
Style: 2 PackVerified Purchase
I have an old 1990 Honda civic, which is fuel injected. Itwas having trouble starting, and I realized it was the fuel injectors. This works like a charm. I put it in the gas tank, on empty, right before fueling and the car has been starting fine. I will ad a bottle each time I fuel now.
Glad it is on subscribe and save.
Read more
7 people found this helpful
Helpful
Comment Report abuse

Joe Y
2.0 out of 5 stars Beware of package leakage
Reviewed in the United States on May 30, 2019
Style: 2 PackVerified Purchase
The review is not on how good the product cleans the engine but the packaging issue.

I kept the Amazon shipping box with this product inside in my car, so I can add this product when I refill my gas tank after the current tank runs out.

Following this action, I have been smelling heavy oily odor in my car. However, I didn't realize any issue with the package but thought it was caused by gas or oil leakage of my car. I experienced dizziness and light headache for several days but could not find where the problem was until I went to a gas station and opened the package. One of the two bottles was half empty and covered with grease. The strong odor coming out it was fainting. I discarded the bottle immediately.

Don't make the mistake that I made. Be aware of the risk of a leaking package and don't keep it in your car without careful inspection.
Read more
One person found this helpful
Helpful
Comment Report abuse

Haden Tippps
5.0 out of 5 stars I Use These Religiously!
Reviewed in the United States on May 23, 2019
Style: 2 PackVerified Purchase
I am a believer in these! I drive a 2004 Infiniti G35. The engine had sat for a while and I bought it used. I thought it was the air filter but that didn’t seem to be the problem related to the poor throttle response. I ran a bottle of this through the engine and it is working better than before. Throttle response is great and a minor MPG boost was observed. Only one or two miles per gallon. Great price on these as well!
Read more
One person found this helpful
Helpful
Comment Report abuse
See all reviews from the United States
Pages with related products. See and discover other items: jet boat accessories, fuel cleaner, fuel injector cleaner, fuel injector cleaning, fuel system cleaner, gas additive