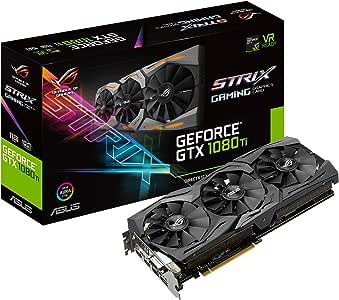 Buy this product as Renewed and save $359.01 off the current New price.

4.4 out of 5 stars
4.4 out of 5
296 customer ratings
How does Amazon calculate star ratings?
Amazon calculates a product’s star ratings based on a machine learned model instead of a raw data average. The model takes into account factors including the age of a rating, whether the ratings are from verified purchasers, and factors that establish reviewer trustworthiness.

Ziggy
5.0 out of 5 stars Stop trying to justify it and JUST GET IT!
Reviewed in the United States on November 20, 2017
Style: ROG STRIXSize: Base Clock 1493 MHzVerified Purchase
There is often a HUGE difference between the things you want, and those you need. This was most definitely not one of the latter. Me saying I needed this video card is akin to saying something like...

...In short, I DEFINITELY DID NOT need this card, but by God, I bought it anyway.

Generally being a budget conscious individual, I've always done my PC gaming on previous generation hardware, and used mid-tier components when building or upgrading my computers. Up until the last month, I've been using an R9 270x with an AMD FX CPU and 8GB of RAM. (I should add that this rig served me faithfully, and is still serving my better half) But somewhere deep in the recesses of my mind, a voice was crying out for more, more, MORE! It was crying out for virtual reality, and more pixels than I could see, more textures, more frames per second... MORE POWER. So for once, I succumbed to my deepest, nerdiest desires and built a completely unnecessary and absolutely beastly computer.

Piece by piece I gathered top tier components, and the monster began to take shape. I obtained an i7-7700k CPU, copious amounts of solid state storage, plentiful gold rated wattage, more DDR4 memory than I may ever make use of, displays with more pixels than all the televisions in my house combined. I added liquid cooling. I added more storage. I put it all into a pristine white case behind a plate of tempered glass. But still this creature lacked the fierce heart of a warrior. The voice still cried out for MORE

There was only one source for such a heart; only one company capable of producing such a powerful piece of technology. The core of this savage brute would have to be produced by Nvidia. I could have settled for 1050ti or a 1060 and gamed happily enough for a while. I could have sprung even more for a 1070 or a 1080, and been completely amazed with the results. But these options just would not do. I wanted the BEST, so I bought the BEST.

...nothing could have prepared me for it.

I could go on and on, but this GPU is nothing short of amazing. I didn't need it, and I couldn't justify the cost. But I am so incredibly glad I bought it. I will likely be eating ramen noodles for the next few months while recouping the costs of building this PC, but that's okay. I may have to turn my heat off to afford my utility bill, but at least the 1080 ti will keep my office warm while I bask in the glow of triple digits frame rates and more pixels than there are stars in the sky.

Pros:
-GTX1080ti is arguably the best graphics card of 2017. It can easily handle any AAA games out there.
-Excellent cooling fans and heatsink. The temps does not exceed 63 degrees even under load.
-Fans are silent until you crank up their speed beyond 50%, which you will not be doing since the heatsink is so efficient.
-This thing's design is so damn sexy! LED is also a big plus if that's your thing.
-There's a 4-pin LED and two fan headers hidden on the card's right side.
-Efficient power consumption. The GTX1080ti only consumes 300W under heavy load.

Cons:
-It's more of a brick rather than a card. This beast occupies 2 1/2 PCIE slot. It can be challenging to install this on small form factor PC's.
-A good air-flow is crucial to GTX1080ti. My temps reached up to 85 degrees until I modified my mini-ITX chassis.

Other thoughts:
The GTX1080ti is a must have for gamers with deep pockets. This card can easily handle 1440p and 4K gaming.
Read more
14 people found this helpful
Helpful
Comment Report abuse

Amazon Customer
5.0 out of 5 stars though it doesn't like 4k resolution much
Reviewed in Canada on June 27, 2018
Style: TURBOSize: Base Clock 1480 MHzVerified Purchase
Haven't driven it too hard yet because I don't have a CPU cooler at the moment (90C avg temp, ouch) but it's more than capable of some fancier gaming and digital projects.

Had Skyrim on Ultra connected to a 4k LG TV (not monitor) running around 260GB of mods through Wrye & TESVedit scumming.
The only glitch/issue was in RaceMenu, where it went from eating ~5.1GB VRAM to 10.98GB and nearly shut it down. After a quick update, all ran smoother than 720p on a 550.

Modded the living daylights out of Dragon's Dogma (pre-update), with 4k graphics updates, and the only issue was a slight sky banding typical of the game even with ENB. Fallout 4 was a breeze, though it doesn't like 4k resolution much. FO3 & FNV (2k-4k gfx) are amazing alone or together (TTW). Fable Anniversary is pretty great at 4k, too -- figured during the undead waves part of the campaign it might freeze up with something like 200+ bodies on-screen moving about/attacking/taking damage from AoE... nothing, not even a single frame below 60.

As for Photoshop, I've yet to see anything slow this monster. GIMP did slightly with a 6GB file, but that was GIMP's error.

Bit of a tough fit on z370-e, with a Shinbo XL case, but you can make it fit.
Read more
One person found this helpful
Helpful
Sending feedback...
Thank you for your feedback.
Sorry, we failed to record your vote. Please try again
Report abuse

Chris M.
5.0 out of 5 stars Excellent product!
Reviewed in Canada on October 30, 2018
Style: ROG STRIXSize: Base Clock 1493 MHzVerified Purchase
Excellent in all aspects except price. This SHOULD be priced around $850, although when I ordered it (September 5, 2018) it was down to $1,089. Wanted this card for well over a year but the inflated price had kept me away (thanks-no thanks, cryptocurrency!) After watching the price decline for a short while, I began to panic because I figured supply wouldn't keep up with demand, so I bought one. I was lucky because the prices went up... again..

4 stars because, although purchased relatively cheaply, prices are back up there again.
5 stars for all the other reasons!

Fast delivery, works great, nice RGB. Would recommend to those who have the cash. Hopefully prices will settle!
Read more
One person found this helpful
Helpful
Sending feedback...
Thank you for your feedback.
Sorry, we failed to record your vote. Please try again
Report abuse

Simon
1.0 out of 5 stars bad seller
Reviewed in Australia on February 21, 2019
Style: TURBOSize: Base Clock 1480 MHzVerified Purchase
Product had already been opened with warranty used by previous buyer. I had nothing but problems with this card and the Seller was unresponsive to messages to correct the issue. Buy through someone else.
Read more
3 people found this helpful
Helpful
Sending feedback...
Thank you for your feedback.
Sorry, we failed to record your vote. Please try again
Report abuse

MIKOLINO
5.0 out of 5 stars Best 1080ti model!
Reviewed in Canada on September 29, 2018
Style: ROG STRIXSize: Base Clock 1493 MHzVerified Purchase
Best 1080ti ever. Never overheated. Very heavy so check if your motherboard is strong enough. Can run most of the games in ultra 1080p 144fps.
Read more
One person found this helpful
Helpful
Sending feedback...
Thank you for your feedback.
Sorry, we failed to record your vote. Please try again
Report abuse

Nonamer
5.0 out of 5 stars Beast card
Reviewed in Canada on September 1, 2018
Style: ROG STRIXSize: Base Clock 1493 MHzVerified Purchase
Runs cool and quiet. I tried this with games like assassin's creed origins. On ultra settings 1440P, runs the games smooth and 60+ fps (rarely drops to 55 fps). During this game the temperatures did no go beyong 63C and it ran the fans quietly during game. Easy software to overclock andset your fans to off until reaching certain temp.
Read more
Helpful
Sending feedback...
Thank you for your feedback.
Sorry, we failed to record your vote. Please try again
Report abuse

Abbie Trottier
4.0 out of 5 stars Amazing.
Reviewed in Canada on February 12, 2018
Style: ROG STRIXSize: Base Clock 1493 MHzVerified Purchase
This GPU is gorgeous and a beast. Blows My old 970 out of the water. Only downside is trying to find one decently priced.
Read more

Serjan
5.0 out of 5 stars Good card
Reviewed in Canada on December 22, 2018
Style: TURBOSize: Base Clock 1480 MHzVerified Purchase
It was good value for money when it was around 700$, looks like now prices racked up much higher
Read more
Helpful
Sending feedback...
Thank you for your feedback.
Sorry, we failed to record your vote. Please try again
Report abuse

Page 1 of 1 Start overPage 1 of 1
This shopping feature will continue to load items when the Enter key is pressed. In order to navigate out of this carousel please use your heading shortcut key to navigate to the next or previous heading.
Back
Next
Pages with related products. See and discover other items: pc dual monitor, asus vr, asus rog, vr ready pc, ASUS Aura Fans, Aura Sync Fans