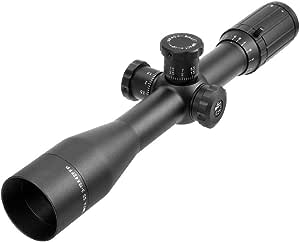 by SWFA SS
4.9 out of 5 stars 28 ratings
| 26 answered questions
Currently unavailable.
We don't know when or if this item will be back in stock.

4.9 out of 5 stars
4.9 out of 5
28 customer ratings
How does Amazon calculate star ratings?
Amazon calculates a product’s star ratings based on a machine learned model instead of a raw data average. The model takes into account factors including the age of a rating, whether the ratings are from verified purchasers, and factors that establish reviewer trustworthiness.

Dusty Dino
5.0 out of 5 stars Good features, great price!
Reviewed in the United States on September 13, 2015
Verified Purchase
This scope contains features usually priced beyond its cost. Generally, you pay a bit more to obtain a quality, variable power, trackable, FFP scope. This SWFA scope is commonly compared to the Vortex Viper PST 4-16 FFP, which is $200 more. The extra money for the Vortex gets you an illuminated reticle, a zero-stop, and little fiber optic accents. The SWFA includes an integrated quick-throw lever. Vortex sells a quick-throw lever that will cost you an additional $60. It should be noted that Vortex has just released the Gen 2 line of Viper PST scopes, which includes a 3-15x44 option. It's pretty clear that Vortex intends to compete with this SWFA model. Once again, this new Vortex is priced higher, but packs a few more features. I own a Gen 2 Vortex Viper PST 1-6x24 and it's great. It's not a direct comparison to this SWFA optic. I bring it up because Vortex also has some solid offerings that are worth your consideration. It will be up to you to decide what's most important and still within your budget.

Glass can be difficult to describe. Coatings designed to enhance contrast in certain light can make objects seem dark in other light. And bright glass does not necessarily mean sharper resolution. Clarity is largely determined by precise lens placement, not just glass quality. And so, for a very general reference, this optic is noticeably brighter and more clear than my Leupold VX-II 3-9x40 (a common American household scope). Put plainly, the user can immediately determine that the optics in the SWFA are superior. However, when comparing this to my friends SWFA SS HD 5-20x50, this model is clearly not in the same league. I'm not saying the glass is bad, because I actually feel it's quite good. I'm simply pointing out that you can have a significantly better viewing experience if you're willing to pay for it. But in this price range, for a scope that tracks very well, the glass is better than what you'd expect. If you're a glass snob, you probably won't like this model. You *might* like SWFA's HD line. Their HD line isn't for the top tier glass purist, but it stacks up well against some higher priced optics.

The magnification ring and parallax knob are both adequately smooth and stiff. Parallax adjustment goes from 6m to infinity, and is marked with various distances in between. However, these distance markers are quite inaccurate. No big deal, I don't look at the knob when adjusting parallax anyway. The turrets are stiff enough that you won't worry about losing your zero when you bag your rifle. The turrets are affixed via 3 set screws, allowing you to center them back at zero once you're sighted in. The turrets turn with tactile and audible clicks. The clicks aren't as crisp as I would like, but they're adequate. I am able to turn the turrets back and forth a fair amount without clicking them to the next hashmark. And yes, my set screws are properly tightened down. The turret set screws are not slipping. The movement is play in the mechanical adjustment system. I've felt better clicks, but I've also felt much worse. Most importantly, the scope tracks very well, which is what really matters here. SWFA claims 36 mils of elevation and windage adjustment. Turning the turrets through their full adjustment range, I'm getting 40.2 mils of elevation, and 37.7 mils of windage. The eyepiece is of the fast focus design. The reticle is SWFA's own mil-quad design. It's highly useful and I like it quite a bit. Using the reticle to range or size targets of known distances and size has proven very accurate. It's too bad SWFA doesn't include a plastic reticle subtension card like they do with their HD line. I had to make my own and have it laminated.

I'm including some pictures through the optic. Please keep in mind that these were taken with my iPhone for fun. The camera will not represent the true quality of the optics. Plus, I'm sure that Amazon compresses review images down to garbage. The 4 red targets are at 200 yards. The 1 red & 1 green target are at 300 yards. The 6 orange steel plates are at 750 yards. Using this scope on the pictured AR, with my chrono'd handloads, and the Vortex LRBC, I have accurately and consistently tracked elevation from a 100 yard zero to impact targets at 200, 250, 300, 500, 750, and 1000 yards. This scope is definitely a keeper. I highly recommend it as THE budget option for an aspiring medium/long range shooter.
Read more

Ian Duffy
5.0 out of 5 stars I hit steel at 1000 yards with this scope. It works.
Reviewed in the United States on July 13, 2018
Verified Purchase
I used this scope on my Remington 700 to complete a long range shooting class (Bangsteel in Wytheville VA - GREAT CLASS!) and it was great.
Here are some highlights:

1. When we got to the class, the instructor checked all our rifles for zero to make sure we had read the course instructions and followed them. My rifle had been zeroed and was the first to go. While the instructor was describing parallax he said that "many rifle scopes are not accurate in their range estimates (on the knob) when it comes to adjusting for parallax, so just rotate the knob until your target and reticle are both in focus. This rifle scope happens to be accurate".
2. Dialed in at 460 yards then got a first shot hit at 700 yards after getting dope data from JBM. This scope tracks accurately.
3. Consistent hits at 800 and 1000 yards.

I sold my Leupold Mark 4 LR/T 3.5-10x40 mil-dot for this scope and I have no regrets. The main difference was the glass was noticeably clearer on the Leupold, and the Leupold was a milliradian reticle but adjusted in MOA which required some math. This scope is mil/mil so it's pretty straightforward to adjust. The mil-quad reticle works and is consistent with the knob/adjustments. The adjustments are spot-on.

I'd love a zero stop but you can get one for $22 via mail order so I'll just do that and be happy.
Read more
16 people found this helpful
Helpful
Comment Report abuse

Laplace Transform
5.0 out of 5 stars Performance value that can't be beat
Reviewed in the United States on March 27, 2018
Verified Purchase
Incredible value. Fantastic scope for under $1000, this is my second SWFA and I can't rave about them enough. Mounted with TPS Rings bought direct from SWFA's website (I split the order to minimize added shipping costs). Recommend a one-piece rail base along with SWFA's tube-mounted bubble level, and the sun-shade. Excellent reticle for ranging and engaging targets in a variety of light conditions. 3x is clear, 15x isn't just magnifying lens aberrations, field of view is acceptable (better than budget scopes, not as good as tier 1 scopes). Magnification ring is sufficiently stiff and smooth, definitely install the cat tail. Knobs/turrets have great clicks, easily manipulated with bare hands or gloves, clean markings. Unless you are an accomplished long-range precision shooter that requires tier 1 optics (S&B, Swaro, Zeiss, NF, IOR, etc), this scope will get it done at a quarter of the price.
Read more
15 people found this helpful
Helpful
Comment Report abuse

T. Sommers
5.0 out of 5 stars Perfect Scope for Long Range
Reviewed in the United States on March 31, 2017
Verified Purchase
I have over a thousand rounds now on this scope and have shot it out over several distance to nearly 1100 yards, it is always right on and repeats everytime.
Read more
13 people found this helpful
Helpful
Comment Report abuse

SC
5.0 out of 5 stars Incredible value
Reviewed in the United States on April 18, 2019
Verified Purchase
This FFP scope tracks dead on. The glass is terrific for the money. It currently rides on a RPR rimfire - yes, the scope costs more than the rifle - and enables meaningfully challenging ballistics issues to be experienced sub 300 yards. The magnification range lets you see .22 bullet holes on paper fairly easily so you can monitor your progress without walking to the target.
Read more
4 people found this helpful
Helpful
Comment Report abuse

Northman Saga's
5.0 out of 5 stars Why waste money on more expensive scopes
Reviewed in the United States on October 25, 2018
Verified Purchase
Scope clarity is good for price range. Not as clear as my 2K dollar Leupold, but I can clearly see out to max range of my system. I routinely dial out past 1300 yards with my 18 inch AR10 .308 and it always dials in perfectly, and returns to zero. Once you get the turrets zeroed, I recommend some blue locktite on the turret screws as they tend to work loose over a few hundred rounds.
Read more
5 people found this helpful
Helpful
Comment Report abuse

Kurt K.
5.0 out of 5 stars Quality and affordable.
Reviewed in the United States on March 12, 2017
Verified Purchase
Excellent scope great customer service. I now own three of these scopes and when the need arises I will buy more.
Read more
9 people found this helpful
Helpful
Comment Report abuse

W.M.
5.0 out of 5 stars Great scope for the price
Reviewed in the United States on March 25, 2018
Verified Purchase
Great scope for the price. Would be nice to have a zero stop but you can purchase some nylon washers on ebay for that for cheap. This is not the end all be all of scopes, but if a very rugged scope with very usable glass and excellent tracking is what you are after, the SWFA offerings are hard to beat. Excellent customer service and support, great warranty. The turrets and the magnification ring could stand to be a touch stiffer, but I have not encountered any issues with it so far, merely a personal preference.
Read more
5 people found this helpful
Helpful
Comment Report abuse
See all reviews from the United States