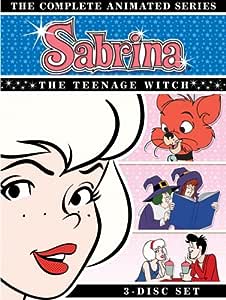 Sabrina, the Teenage Witch is no ordinary girl, she's the sweetest and sassiest magical girl in Riverdale! Teen life is tricky enough, but it s double trouble when magic is involved. When Sabrina tugs on her earlobe, there s no telling what might happen! Join Sabrina and her friends, her cat Salem, witch Aunts Hilda and Zelda and warlock Uncle Ambrose in all 31 episodes from the original animated series.

4.8 out of 5 stars
4.8 out of 5
136 global ratings
How are ratings calculated?
To calculate the overall star rating and percentage breakdown by star, we don’t use a simple average. Instead, our system considers things like how recent a review is and if the reviewer bought the item on Amazon. It also analyzes reviews to verify trustworthiness.

Vinnie Rattolle
4.0 out of 5 stars Same DVDs, new cover
Reviewed in the United States on September 10, 2019
Verified Purchase
A brief history of the show... Sabrina made her TV debut in 1969 as a component of "The Archie Comedy Hour," and the next year she headlined "Sabrina and the Groovie Goolies," which teamed her with Filmation's sendup of the classic Universal Monsters. Filmation was a studio known for recycling their own content, so when Sabrina got a stand-alone series the next season, they simply recycled the 62 shorts that were created for the previous two shows. This repackaged "Sabrina the Teenage Witch" ran on various networks and in syndication throughout the '70s and '80s, until Filmation closed their doors and sold off their assets. In the mid-90s, Hallmark Entertainment snapped up the rights to Filmation's library and literally destroyed it. The master elements for most Filmation shows (including Sabrina) were shipped off to the garbage dump, and inferior PAL (European) transfers were inexplicably retained.

A few episodes made their way to Archie compilation DVDs just after the turn of the century and then the complete series was released in 2012. After a while on the shelves at Walmart, the discs were discontinued and resale prices swelled, peaking around the release of Netflix's "Chilling Adventures of Sabrina." A year later, Universal has finally gotten around to reissuing the set.

Sabrina and Salem are riding a broomstick across the new cover, but the DVDs include the same menus and transfers as the 2012 discs, which came out just before everything started getting HD-scanned. I'm not sure if the discs are overcompressed or if it's a result of the PAL transfer (I suspect it's a little of both), but there's a motion-blur whenever the characters are engaged in action. Otherwise, it's a perfectly adequate transfer, with a generally clear picture and pitchy mono sound in both English and Espanol. The character voices are a little off, but it's because the PAL version runs at a different frame rate, which speeds everything up very slightly.

Episodes are available to view as standalones or with a "Play All" selection that jams them all into a three-and-a-half-hour binge, compounding the compression issue. The main menu redundantly wails the theme song, the episode lists skip the titles of the second shorts, and the only extras are the first episode of "The Archie and Sabrina Surprise Package" and a gallery of production art. It's bizarre that they didn't include the primetime special "Archie and His New Pals," which set up the show's concept, but I suppose they wanted you to purchase a separate Archie set to see that bonus feature.

On one hand, it's nice to see that the show's back in circulation at an affordable price. On the other, it's an underwhelming release in an era of HD.
Read more

FROZEN4EVER!
2.0 out of 5 stars Here comes Sabrina....
Reviewed in the United States on June 6, 2020
Verified Purchase
And all her friends are here again with you? Yeah,If you don't call Harvey her boyfriend.
I was very disappointed that he wasn't on the rest of the series.
Archie and the gang are mainly on it and the groovy ghoulies take over almost all of the last disc.
Harvey's only a hit and miss basically on disc 1.
It shouldn't be called Sabrina the teenage witch if it's mainly about Archie and the gang and the groovy ghoulies.
Don't get me wrong, I like the Archie's, but this isn't their show.
I got annoyed with the Groovy Ghoulies.
It's like they were constantly experimenting on characters to put on the show.
Harvey shows up more often in the comics. :(
Harvey is one of my favorite characters.
I don't recommend it for Harvey fans unless you want to mainly be disappointed.
Read more
2 people found this helpful
Helpful
Comment Report abuse

J. Rose
5.0 out of 5 stars Practically Magic
Reviewed in the United States on May 23, 2008
Verified Purchase
At long last, the original animated incarnation of SABRINA THE TEENAGE WITCH finally makes her very auspicious DVD debut. Genius Products, in tandem with its other ARCHIES releases, brings you a 3-DVD set of the original Filmation animated series featuring all 31 episodes.

Sabrina made her first appearance in the ARCHIE'S MADHOUSE comic series and gained a fair amount of popularity, eventually spawning her own comic book. Filmation brought Sabrina to animation in the prime-time special ARCHIE AND HIS NEW PALS, and eventually spun off her own series after showcasing her as part of THE ARCHIE COMEDY HOUR. The resulting cartoons depict Sabrina as a resident of Riverdale and a student at Riverdale High, accompanied in her adventures by her boyfriend Harvey and her friends Spencer and Ophelia (who respectively serve Jughead and Betty functions to Harvey's Archie).

However, as our title says, Sabrina IS a witch, and therefore must keep her magical abilities a secret from the Riverdale denizens. Though witches are expected to hex people, the good-natured Sabrina often uses her powers in attempts to help others or solve problems, usually with disastrous results. Most of the plots revolve around Sabrina's attempts to juggle her witchly studies and her teenage life, featuring her magical cat Salem and her two aunts, the cantankerous Hilda and the kindhearted Zelda. There is also Cousin Ambrose, a sophisticated, somewhat bon-vivant warlock who is more sympathetic to Sabrina's teenhood and occasionally aids her in her adventures, serving as a mixture of the Dr. Bombay and Uncle Arthur characters from BEWITCHED. The ARCHIES crew makes regular appearances, with Reggie continuously (and unsuccessfully) trying to out Sabrina as a witch to the rest of the gang.

And of course, there are the GROOVIE GOOLIES. Yep, this set not only has all of the Sabrina episodes from her own series, but ALSO the episodes in which everyone's favorite gang of maladroit monsters made their FIRST appearances. Mixing the Goolies, the Archies and Sabrina together creates a special blend of comic chaos, and these episodes do not disappoint. As a special feature, the set includes the first episode of THE ARCHIE AND SABRINA SURPRISE PACKAGE, in which Archie, Sabrina and the gang work together to solve a mystery at Riverdale. (Will this series be a future DVD release? Only time will tell.)

The set is colorfully packaged, though not in a clear slipcase like the other ARCHIES releases, and the artwork is of the usual excellent standard. The episodes appear to be sourced from the best materials, showing clear pictures and few signs of aging. The DVD holder is a bit difficult to operate at first (the first two discs are overlapped, placing the click-tabs on the sides rather than in the middle), so examine carefully rather than tear into it.

Pick up this set if you're an ARCHIES or SABRINA fan, and pair it with the GROOVIE GOOLIES set for the right mix of supernatural Saturday-Morning silliness. You'll see her tug her ear... and you'll see your blues disappear. Count on it.
Read more
27 people found this helpful
Helpful
Comment Report abuse

R. M. Page
5.0 out of 5 stars Finally Im reunited with my childhood friend!!! SABRINA!!!
Reviewed in the United States on April 29, 2008
Verified Purchase
I grew up in the 1970's running to the TV every Saturday morning to watch my favorite show...Sabrina The Teenage Witch!! I loved her magic and wished I could have that same type magic when I was a kid. I was very happy when they brought the character back in the 90's with Melissa Joan Hart as Sabrina but this is the original Sabrina and none is as good or as much fun!!! I cant really add much that hasnt already been posted except its a great treat to have my old childhood pal back!! The picture color is excellent and the stories (some of which includes appearances by The Archies & Groovy Goolies) are nothing but pure fun and imagination!! Check it out!!!! If you like the 90's Melissa Joan Hart Sabrina try out the REAL Sabrina...I think you will love her!! Thank you for releasing this and making a long time dream of mine come true!!!!!!
Read more
10 people found this helpful
Helpful
Comment Report abuse
See all reviews

anita sandli
5.0 out of 5 stars Five Stars
Reviewed in the United Kingdom on September 9, 2015
Verified Purchase
I love it
Read more
Report abuse

genbel
4.0 out of 5 stars good thanks.
Reviewed in Canada on February 23, 2016
Verified Purchase
good thanks .
Read more
Report abuse

Dakota_North
5.0 out of 5 stars This is the REAL Sabrina, kids
Reviewed in Canada on December 15, 2018
Verified Purchase
I love it
Read more
Report abuse
See all reviews

Page 1 of 1 Start overPage 1 of 1
This shopping feature will continue to load items when the Enter key is pressed. In order to navigate out of this carousel please use your heading shortcut key to navigate to the next or previous heading.
Back
Next
Pages with related products. See and discover other items: children's animated series, anime classics, anime complete series, anime complete, sabrina movie, sabrina the animated series