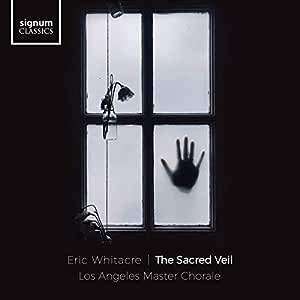 Secure transaction
Your transaction is secure
We work hard to protect your security and privacy. Our payment security system encrypts your information during transmission. We don’t share your credit card details with third-party sellers, and we don’t sell your information to others. Learn more
Details
Ships from
Amazon.com
Sold by
Amazon.com
Sacred Veil has been added to your Cart
New & Used (14) from
$15.10 & FREE Shipping on orders over $25.00

Los Angeles Master Chorale (Artist), Eric Whitacre (Composer, Conductor) Format: Audio CD
4.8 out of 5 stars 45 ratings
Amazon's Choice recommends highly rated and well-priced products.
Amazon's Choice for "eric whitacre"
See all 2 formats and editions Hide other formats and editions
Includes FREE MP3 version of this album.&nbspProvided by Amazon Digital Services LLC. Terms and Conditions. Does not apply to gift orders.&nbspComplete your purchase to save the MP3 version to your music library.
Available at a lower price from other sellers that may not offer free Prime shipping.

Grammy Award-winning composer and conductor, Eric Whitacre, is among today’s most popular musicians. His works are programmed worldwide and his ground-breaking Virtual Choirs have united singers from more than 145 countries. His compositions have been widely recorded and his debut album as a conductor on Universal, Light and Gold, went straight to the top of the charts, earning him a Grammy. As a guest conductor he has drawn capacity audiences to concerts with many of the world’s leading orchestras and choirs in venues such as Carnegie Hall (New York), Walt Disney Concert Hall (Los Angeles), the Royal Albert Hall and Buckingham Palace (London).

The Sacred Veil - a project led by Eric Whitacre and Charles Anthony Silvestri - was created following the passing of Charles wife, Julia in 2005. It represents a journey towards the answer for many questions, including whether departed loved ones are truly gone, and how can we mourn those we have lost whilst still moving forward? In Charles own words, the project became a significant part of my journey toward healing and wholeness after great loss. Poet, author, composer, and speaker Charles Anthony Silvestri has worked with other artists from all over the world to create texts tailor-made for their commissions and specific artistic needs. He enjoys the challenge of solving these creative problems and has provided custom choral texts, opera libretti, program notes and other writing for composers including Eric Whitacre, Ola Gjeilo, Kim Arnesen, and Dan Forrest, and for ensembles ranging from high schools to the Houston Grand Opera, from the Kings Singers to the San Francisco Gay Mens Chorus, from Westminster Choir College to Westminster Abbey. Grammy® Award-winning composer and conductor Eric Whitacre is one of the worlds most performed living composers. His works have been programmed worldwide by millions of amateur and professional performers, while his ground-breaking Virtual Choirs have united singers from over 120 different countries. Eric, a graduate of the prestigious Juilliard School of Music, is presently Artist in Residence with the Los Angeles Master Chorale, following five years as Composer in Residence at the University of Cambridge, UK.As conductor of the Eric Whitacre Singers, he has released such chart-topping albums including Light and Gold and Water Night. In high demand as guest conductor, he has drawn capacity audiences to concerts with the Netherlands Radio Choir, London Symphony Orchestra, Flemish Radio Choir, and Minnesota Orchestra.

4.8 out of 5 stars
4.8 out of 5
45 global ratings
How are ratings calculated?
To calculate the overall star rating and percentage breakdown by star, we don’t use a simple average. Instead, our system considers things like how recent a review is and if the reviewer bought the item on Amazon. It also analyzes reviews to verify trustworthiness.
Top reviews

This album is the most phenomenal thing Whitacre has put out to date. Normally, I have not been a fan of his instrumental inclusions, but I find that this time, it was exceptionally well done. The cello and piano are not add-ons. They are essential to the piece.

The intimacy of not just the music, but the lyrics contrasted with the sterility of the reading of the medical records of Silvestri's wife. The glissandi in "You Rise, I Fall".

The emotion of this piece is as raw as it comes, but it is done with style, respect, veneration. You see the height of love and happiness, and are also dragged down to depths of despair most people don't realize exists. The best of life, the worst of life. Contrasting feelings. Tension/release. Life. Death.

Jon Fisher
5.0 out of 5 stars Incredible Album
Reviewed in the United States on September 29, 2020
Verified Purchase
This is one of the most harrowing cathartic albums I've ever listened to that focuses on the journey of one families joy, grief and loss. Everyone can relate to this journey and I highly recommend a listen, even if it pulls at your heart strings to the point of misery. This audio journey was well worth it.
Read more
4 people found this helpful
Helpful
Report abuse

T. L. Adams
5.0 out of 5 stars Absolutely Incredible
Reviewed in the United States on December 28, 2020
Sacred Veil is the most emotional choral piece I have ever experienced. It runs the length, depth and breadth of everything a human can feel. I just bought the CD and listened to it on Amazon Prime so I wouldn't have to wait. I have been openly weeping for the last hour and more. This piece was a collaboration between Eric Whitacre and his dear friend, poet Charles Anthony Silvestri. They explore Silvestri and his wife's journey through love, parenthood, and the early loss of his wife to cancer. The interview at the end between Whitacre and Silvestri is as emotional as the music. It adds layers of meaning and great insight about the music, the journey through sorrow and healing, and makes the entire work deeply personal. I simply can't express what this piece is. It is fiery hell and transcendent glory, and everything in between. It is a masterpiece.
Read more
2 people found this helpful
Helpful
Report abuse

WoodsBaker
5.0 out of 5 stars Stunning
Reviewed in the United States on August 28, 2020
Didn't purchase through Amazon but listened to it on Spotify. It's incredible. What an achievement for both Whitacre and Silvestri with a stunning subject matter. The Los Angles Master Chorale sounds fantastic with such difficult music. The only quibble would be that it is tough to pick up all of the lyrics, especially with the women. I'll never understand how any mind can think of music like Eric's does. He's a gift to us all. Buy this.
Read more
3 people found this helpful
Helpful
Report abuse

Celeste Stokely
3.0 out of 5 stars A potentially moving work comes across as musically tepid and uninspired
Reviewed in the United States on February 10, 2021
In 2005, Julia Lawrence Silvestri, the wife of poet/librettist Charles Anthony Silvestri, died of ovarian cancer shortly before her 36th birthday, leaving behind her husband and two small children. A decade later, Charles had reached a point where he could begin to address his loss in poetry, and he penned the lines of this work. On a visit to Los Angeles for a family funeral, Silvestri stopped by to visit the composer, a longtime friend of himself and Julia, and left a copy of the verses on Whitacre’s piano. Upon finding them, Whitacre immediately began to set them to music. The final product is in fact a collaborative effort: of the 12 tracks, tracks 1, 2, 3, 6, and 11 comprise texts by Charles Silvestri, tracks 4, 8, and 10 feature a poem and two emails to friends by Julia, and tracks 9 and 12 have lines by the composer, while tracks 5 and 7 are instrumental interludes. The arc of the poem opens with a reflection on how birth and death slightly open the veil into eternity and allow love to slip through, followed by Julia entering Charles’s life; the joy of having children; the shock of the diagnosis of cancer; Julia’s increasingly desperate and failing struggle for life; her death; and a final benediction. A recorded postscript here is a 23-minute interview with Whitacre and Silvestri on their memories of Julia and their collaboration in creating this work.

I myself have lost a friend to ovarian cancer, although she was far older than Julia was. It will perhaps seem almost a kind of blasphemy to be anything other than deeply moved at a work which commemorates a tragic loss of a beautiful young life, and obviously came from the deepest recesses of the minds and hearts of both librettist and composer. But I very regretfully confess that I find myself ultimately unmoved by the results here. The pastiche of texts has the usual problem of a lack of stylistic unity. The music features all of Whitacre’s well-known compositional devices, which work well enough in a short compass but over a span of almost an hour become repetitive and clichéd and lose interest. While there are moving passages of touching tenderness—the instrumental interlude of track 7, and Julia’s desperate request for prayers in track 10, are good instances—the overall result for me comes perilously close to sounding like New Age background mood music, or a score for a generic Hallmark made-for-TV movie drama. Certainly the performance itself cannot be faulted: Under the composer’s direction the choir members sing with great purity of tone, clear diction, and expressivity, and the two instrumentalists are likewise excellent. The recorded sound is warm and inviting; but it was a mistake to staple the booklet (with texts and extensive commentary by the composer and librettist) into the digipak instead of placing it in a pocket, as its weight is already causing it to rip and fall out in my copy. I suspect that my dissent will be very much a minority voice, and that this will be a classical best-seller, and so I urge interested readers to listen and judge for themselves; but repeated hearings have not changed my mind. Not recommended.
Read more
Helpful
Report abuse
See all reviews

Rex
5.0 out of 5 stars An incredible journey behind this work
Reviewed in the United Kingdom on November 16, 2020
Verified Purchase
Already impressed by Eric Whitacre's work the combination of his score and the poem by Charles Anthony Silvestre offers a quite exceptional experience of life and death as experienced by those surrounding a terminal diagnosis. It is emotionally charged and yet completely sympathetic to each aspect of involvement by those affected. As a simple listener it had a powerful impact on me, especially as my life has been engaged with the creation of healthy working environments in health and social care. It reminded me of one young, beautiful resident in a care home who chose to be there having been given weeks to live because she wanted to live 'normally' and not be the object of sympathy and empathy by those who couldn't face what she was facing.
Read more
Report abuse

william simpson
5.0 out of 5 stars Music perfection..
Reviewed in the United Kingdom on November 4, 2020
Verified Purchase
Sublime album... Music of the highest order... As one would expect from Eric Whitacre..
Read more
2 people found this helpful
Report abuse
See all reviews