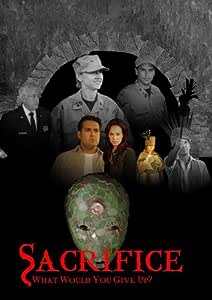 Share
STREAM ANYTIME with Prime Video from $2.99
Have one to sell?
Sell on Amazon

Bob Nelson (Director) Format: DVD
3.0 out of 5 stars 1 rating
Available at a lower price from other sellers that may not offer free Prime shipping.

Sacrifice is a Story/Film project written by Bob Nelson and produced by Guardians of Sacrifice, LLC and Brick Cave Media. The story behind the Sacrifice Film project has been developed since early 2008 by Bob Nelson, with help from the crew of the production, including Brent Heffron, Michael Robinson and Kent Markwart. Sacrifice is the story of choices. Woven into the story are the impact of the choices we make, be they 500 years ago or today. the story follows the discovery of a potential weapon of mass destruction in southern Arizona, and the pursuit of answers by a young couple and the military. What they find is a threat that is (literally and figuratively) larger than all of them as they set loose a giant monster, which subsequently seeks to destroy civilization as we know it. Our story begins... Our story begins 500 years before the timeframe of the film, with a conquistador named Alonso De Ojeda. Ojeda, looking for riches and power, he creates a colony in the new world. Things do not go well for him, and he is driven out. Upon his return to new Hispaniola, he is tried and put in jail. Meanwhile, the slow decline and disappearence of the Mayan people bagan, eventually to lead to a total disappearence of the culture, where they are supplemented by the Aztecs. Both of these events, and Ojeda's insistance as to why he was driven out, provide more questions than answers. 500 Years later... We are engaged in a global war of terror. Tunneling and underground movement have become more extensive tool of the enemy, to avoid the prying eyes of the world. Technology hopes to provide the answer in the form of satellites, the first of which is designed to detect underground stores of weapons of mass destruction. The program is headed by General George Olendorf, a man already with a long career of seeking out the unusual and getting things done. He leverages the power of the America's youth, using programs and incentives to pull together the technology needed to get the job done. A bright young geologist named Kyle Broughnam provides the key elements in the satellite's success. In his command is Colonel Charloette Lene, the daughter of his best friend, a man who passed away under mysterious circumstances. She has worked hard and sought no favor from the General, but he has made sure that she Interstingly also passing away under mysterious circumstances, the parents of anthropologist Atzi Olin is unable to get the answers she seeks about their death, or the last trip they took. In her grief she has leaned heavily on her boyfriend Kyle, and they have navigated a world of uncertainty together.

3.0 out of 5 stars
3 out of 5
1 customer rating
How does Amazon calculate star ratings?
Amazon calculates a product’s star ratings based on a machine learned model instead of a raw data average. The model takes into account factors including the age of a rating, whether the ratings are from verified purchasers, and factors that establish reviewer trustworthiness.
Top reviews

chrysoutdoors
3.0 out of 5 stars Met expectations
Reviewed in the United States on March 26, 2011
Someone with no background in filmmaking decides to make a monster movie. What can you expect? I loved it! The really bad parts add a humorous twist. My favorite scene is in the hole, when the... Oh, wait, you have to see it! (Kudos to Aura Nelson for what I thought was the best scene in the movie!) They definitely need some help with the sound editing. (Background noise drowned out a few conversations.) No academy award, but definitely a bit of suspense and a few laughs. Worth watching!
Read more
3 people found this helpful
Helpful
Comment Report abuse
See all reviews from the United States
Pages with related products. See and discover other items: kaiju movies