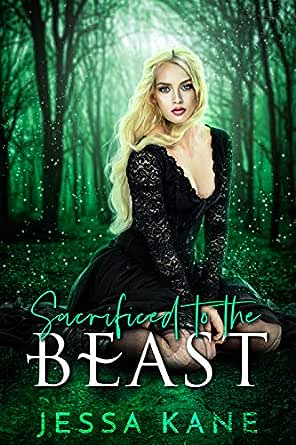 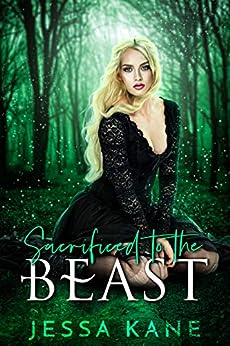 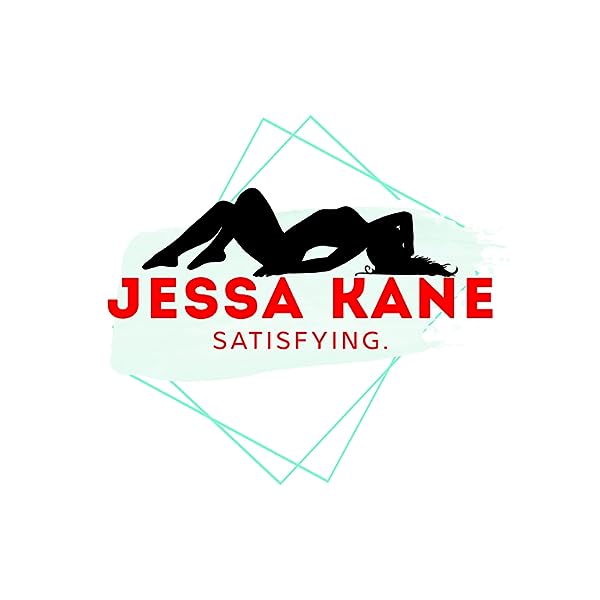 Sacrificed to the Beast Kindle Edition

4.2 out of 5 stars
4.2 out of 5
144 customer ratings
How does Amazon calculate star ratings?
Amazon calculates a product’s star ratings based on a machine learned model instead of a raw data average. The model takes into account factors including the age of a rating, whether the ratings are from verified purchasers, and factors that establish reviewer trustworthiness.
Top Reviews

Kindle Customer
2.0 out of 5 stars Not her best work
Reviewed in the United States on July 11, 2019
Format: Kindle EditionVerified Purchase
I usually love Jessa's stories, but this one lacked any sort of heat because the hero is written as a simpleton. It's very reminiscent of her story, Back River Quiver. If you read that, you know this story. I'm still a big fan; everyone is allowed a miss once in a while.
Read more
20 people found this helpful
Helpful
Comment Report abuse

A. Richard
4.0 out of 5 stars Fiery passion, sincere emotion, and unexpected humor
Reviewed in the United States on July 18, 2019
Format: Kindle EditionVerified Purchase
When animals begin to turn up dead in the town of Piccadily, no one at first knew the reason. But one older resident thinks history is repeating itself, and the only way to stop the killings is to give a human woman as a gift to a creature called the Beast. Diana is the individual chosen by the villagers to appease the being, but what happens after coming in contact with the very large man is nothing like she imagined.

Having not ever read anything released by Jessa Kane, I had no idea about her writing style. The premise of the book could have gone in quite a few directions, and the way in which the story played out was interesting to me. What I discovered while reading SACRIFICED TO THE BEAST was scenes filled with fiery passion, sincere emotion, and unexpected humor. The male lead was definitely not your usual hero, yet I still found Ike to be likable. As for the heroine, I thought Diana was a much more spirited person than she saw herself. Any conversations between her and the “Beast” entertained me during every interaction, regardless of whether their talks were about sex or a serious matter or even some unintentional witty comments. When it comes to any aspect concerning sex, there are some honestly candid moments plus lots of extremely steamy encounters. The story certainly kept me captivated, as I had to find out what would ultimately happen to Diana and Ike.

ali raphael
2.0 out of 5 stars Fun read
Reviewed in the United States on August 27, 2019
Format: Kindle EditionVerified Purchase
Review: I'm once again back to reading some short insta love steamy romances, have been feeling the book slump coming on and I really have a few books I'm super excited to read before the month is up. So I hopped right into this after reading the sample and was hooked.

I really enjoyed reading this, it was fun and had a good plot w/ sizzle, even though it was unrealistic in this current reality. I already want to reread this one again because I just thought it was fun ( really helps with stress), it would be even better with some more drawn out plot and length added to it.

"I hope they scream in terror."

READER
1.0 out of 5 stars Not well written
Reviewed in the United States on August 10, 2019
Format: Kindle EditionVerified Purchase
This story reads at the very beginning, the first few pages, reminiscent of a fairytale. With the townspeople tying up a sacrificial virgin to a tree to put a stop to their livestock being slaughtered. The "beast" that comes to rescue the virgin's rescue is a 7 foot man raised in the woods whose parents died early and has been left to understand and gain knowledge of the world mostly through personal experience and old vcr tapes of Gilligan's Island. Suffice it to say, the beast does not have a way with words, the sex scenes are crude, and nothing is we written. Will not finish. Sorry I wasted my money.
Read more
4 people found this helpful
Helpful
Comment Report abuse

TripleJ
5.0 out of 5 stars Hot twist of Beaty and the beast
Reviewed in the United States on July 11, 2019
Format: Kindle EditionVerified Purchase
I loved this book, the elements that mirrored the classic fairytale are so subtle, and it was such a pleasurable new story. Ike is very alpha beastly and Diana is his perfect complement. This was a quick sizzling hot read! Jessa Kane has become one of the few authors I automatically buy every new release from without even reading the description, and I’m never disappointed!
Read more
2 people found this helpful
Helpful
Comment Report abuse

Rose
5.0 out of 5 stars Beauty and the Beast anyone?
Reviewed in the United States on September 7, 2019
Format: Kindle EditionVerified Purchase
I really enjoyed this book. Loved the story and the characters. Ike and Diana are awesome and I loved how he took care of her. I really liked how he helped her find her "marketable skill" which she had thought she was lacking. This had a lot of feels and a little angst, but it was wonderful. Definitely recommend. Great read!
Read more
Helpful
Comment Report abuse

Sofia's BeddableReads
5.0 out of 5 stars Jessa Kane can do no wrong.
Reviewed in the United States on August 23, 2019
Format: Kindle EditionVerified Purchase
Jessa Kane can do no wrong. It's just no possible.
I absolutely loved this story. It's short, sweet to the point of cavities, funny and hot as all hell.
I can't wait for the next book, whichever it may be. No joke, I'd read a Jessa Kane book per week, if I could. Luckily, I still have 2 on my TBR list.
Read more
Helpful
Comment Report abuse

Cassie G.
5.0 out of 5 stars So Good!!!!!!
Reviewed in the United States on July 12, 2019
Format: Kindle EditionVerified Purchase
This is the sexiest beauty and the beast I have ever read. You can never go wrong with a Jessa Kane book. I enjoy every single one of her books. She is the type of writer that you just know her books are going to be great before you even read it. She never disappoints to deliver off the charts hotness.
Read more
Helpful
Comment Report abuse
See all reviews from the United States

Cookie Munchkin
5.0 out of 5 stars Willing Sacrifice
Reviewed in the United Kingdom on July 18, 2019
Format: Kindle EditionVerified Purchase
This was a quick and dirty read, but thoroughly entertaining.

Diana is chosen to be sacrificed to the beast after the local townspeople’s livestock are being hunted and killed, left and tied to a tree she is terrified when the beast arrives only to be a large man who has lived his life in the shadows of the surrounding woods. Diana quickly comes to see the man beneath the exterior and finds a man she cannot help but fall for, is it possible for her to love him so completely and so fast?

Ike has lived his life in the woods mostly alone after his mother died in childbirth and his father couldn’t live without her, now a man that roams the forest and lives the simple life he is shocked when he comes across the most perfect woman and one he is certain is his fate and was always meant to be his but could she possibly want to stay and love a man like him and could he let her go if that was what she really wanted?

This was a crazy hot interpretation of beauty and the beast in my opinion, loved the story and how these two came together. Loved this book.
Read more
3 people found this helpful
Helpful
Sending feedback...
Thank you for your feedback.
Sorry, we failed to record your vote. Please try again
Report abuse

Kindle Customer
3.0 out of 5 stars Ok
Reviewed in the United Kingdom on July 27, 2019
Format: Kindle EditionVerified Purchase
I loved all of Jessa Kane's books but this one was just ok. This book just didn't grip me don't get me wrong I like Ike and Diana they where perfect together i just found myself skipping towards the end I think it could of had a bit more drama in it to make it a bit more gripping instead of loads of sex.
Read more
One person found this helpful
Helpful
Sending feedback...
Thank you for your feedback.
Sorry, we failed to record your vote. Please try again
Report abuse

Peachez
5.0 out of 5 stars Worthy of a chance.
Reviewed in Canada on December 5, 2019
Format: Kindle EditionVerified Purchase
This story, not by wording or scenes, reminded me of a little of the"Blue Lagoon" movie in its atmosphere. I found the ingenuity of the storyline enjoyable to read and how they get from "a damsel in distress about to be eaten by a monster" to "a misunderstood lonely orphaned alpha wildman wanting to keep the forced sacrificed, low self-esteemed damsel" to a loving, strong couple is believable within this story. I know others have given this book low ratings, but I went in with no expectations, having never read this author and came out wanting to read other books by Ms. Kane. I would say she was successful in her story-telling.
Read more
Helpful
Sending feedback...
Thank you for your feedback.
Sorry, we failed to record your vote. Please try again
Report abuse

April
2.0 out of 5 stars Not for me.
Reviewed in Australia on August 17, 2019
Format: Kindle EditionVerified Purchase
Tried hard to get into it but it just wasn't my cup of tea.
Read more
Helpful
Sending feedback...
Thank you for your feedback.
Sorry, we failed to record your vote. Please try again
Report abuse

Julia
5.0 out of 5 stars 🔥😘👍🏻
Reviewed in Canada on March 4, 2020
Format: Kindle EditionVerified Purchase
Hotter than it has any right to be.

Jessa Kane does it again with this one. If you like her other books, you will like this one.
Read more
Helpful
Sending feedback...
Thank you for your feedback.
Sorry, we failed to record your vote. Please try again
Report abuse