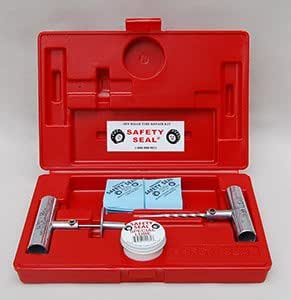 Added to Cart Failed to add an item to cart.
Cart
Share

Add to Cart
$46.50
+ Free Shipping
Sold by: Myers Tire Supply
Add to Cart
$75.11
& FREE Shipping on eligible orders. Details
Sold by: Amazon.com
Have one to sell?
Sell on Amazon
Loading recommendations for you

4.8 out of 5 stars
4.8 out of 5
416 global ratings
How are ratings calculated?
To calculate the overall star rating and percentage breakdown by star, we don’t use a simple average. Instead, our system considers things like how recent a review is and if the reviewer bought the item on Amazon. It also analyzes reviews to verify trustworthiness.

DKG
5.0 out of 5 stars Excellent
Reviewed in the United States on April 13, 2015
Verified Purchase
The short review is this is a great quality product. The case is well organized and comes with every thing needed to repair tire leaks and flats due to holes and damage less than 1/4 inch in the tread.

I chose this kit for its high quality and the fact that the product is manufactured in USA. Also what I like about Safety Seal is that every piece can be ordered separately if needed for refill or replacement purposes. This kit makes an excellent emergency repair kit to keep in vehicle incase of flat tire. Most flats can be fixed using this kit along with an air compressor to inflate the fixed tire. Also you might want to add a plier to the kit for removing debris from tire if necessary. With 30 included plugs it is essentially a life time supply if used on one or two cars. The only thing that would need to be replaced would be the plugs as they can harden over time. I bought this kit because when I removed my summer wheels and tires for the season one tire had a slow leak in it. The tire with the leak had been plugged at a tire shop previously two years past and I assumed the plug was leaking and needed replacement. With winter over and the tires having to go back on the car I thought I now have to deal with the tire and researched this kit. I have never plugged a tire before but have seen it done many times and the instructions seem very straight forward and simple. I thought for the price it would cost to have the tire fixed at a tire shop I could get this kit leave it in the car and if I use it one other time it pays for itself. So I check the existing plug in the tire to find that it wasn't leaking so further inspection of the tire revealed a large screw was stuck in the tread. I followed the instructions and in under two minutes the tire was repaired. Very impressed with the quality and ease of use. I will be buying another one to leave in my other car as I prefer to use this rather than have to ride on a donut if possible.

Amazon Customer
5.0 out of 5 stars Excellent tire plug repair kit for nails for DIY'ers
Reviewed in the United States on January 28, 2018
Verified Purchase
After having had tire "repaired" at Good Years, only to have it leak slowly, requiring weekly air fill up, then finally replacing the tire there, and, more recently, after trying making to make an appointment for a "free" tire flat service, only to be told to come at end of the day, when online scheduler had the entire day open, I decided DIY. I initially ordered a $8 Slime kit, but I saw best reviews for Safety Seal on Amazon, and then bought the kit. I saw the online product video at Safety Seal that explained the magic of their product as mainly being due to their plug, and it was convincing, so decided not to use Slime kit but purchase and try Safety Seal. The product is excellent. There was roofing nail that I took out, then reamer was used. I first did just gentle reaming but plug would not go in. Then I tried putting in reamer again, and rotating it vigorously, as I saw in you tube video's. Then, needle and plug went in snugly, pushed in by body weight. Leak stopped instantly, and soapy water confirmed it. I put it on my car and drove ~15 miles at 60-75 mph and checked leaky with soapy water, and it was still holding, no bubbles. This is an excellent product for DIY'ers.

Update, 1 month later: The brown plug turned black, as seen from outside. Air is holding perfectly. The plug is still visible on tire, so, if needed, I can redo the plug but it appears unnecessary to do so. I put remaining 29 plugs in Ziploc bag for future use. This kit was definitely worth the money, for peace of mind, ease of repair, and quality that will last a long time.

Update, 6 months later. The original plug is still fine. Another tire on a different car lost pressure and this was due to a wood screw between threads. Took out tire and got it patched and it worked fine, everything finished in one hour. Great product.

Update, 1.5 years later. All plugged tires are holding air as well as new ones. Since then, two more flat, one from staple on tread and another a pinhole on sidewall. I read warnings about sidewall but tried it anyway and it worked! It was actually easier to plug it there, less force required, and soapy water and driving on highway confirmed good seal. I was going to try mushroom type of plug, but online search convinced me silicon plug and fixed round shape is not likely to do as well as this string/rope type of plug, which can mold to the shape of puncture and is self vulcanizing. This product has saved me nearly $1k in less than 2 years and I expect it will continue to serve me well.

Update, 2 years later. Just replaced a tire, after running it for 110k miles and 8.5 years, and after plugging in FIVE sidewall pinholes and rips. The tire was a Goodyear tire and probably was rated for 50k, so it was time to replace it. It was nice surprise that all FIVE sidewall plugs, done by Safety Seal strings, held without leaking. This saved me thousands of dollars and dozens of hours visiting tire/auto shops. All of my other plugs have been on treads, not sidewall, so I think this tire probably had mfg defect/weakness. The plugs on treads are holding perfactly, TPM's not triggering and I do not have noticeable leaks, compared to tires without plugs. Safety seal kit is serving well and I expect it will continue to.
Read more
6 people found this helpful
Helpful
Comment Report abuse

SanfordTurbo
1.0 out of 5 stars Handles break
Reviewed in the United States on March 29, 2019
Verified Purchase
The handles with set screws are a total joke. Trying to ream out a tire resulted in the handle breaking right at the set screw. Had to use pliers to get the reamer out of the tire. Glad i was at home where i could finish the job with other tools. Looks great in the box, but after the FIRST USE, it was destroyed without getting the job done. Purchasing something else today.
Read more
7 people found this helpful
Helpful
Comment Report abuse

Grumble
5.0 out of 5 stars Awesome high quality kit
Reviewed in the United States on July 21, 2016
Verified Purchase
This is an awesome tire repair kit. There might be some confusion about whether this is appropriate for full sized trucks since they sell a separate kit for trucks. My guess is that it is for the monster tires. This one worked just fine on my Toyota Tundra. It had a small nail in between the treads. Because the hole was so small, it took a fair amount of pressure to get the insertion tool in the hole. ...which made me glad this was high quality steel. After that, it was fairly easy. Safety Seal has good video on YouTube for showing the whole procedure:

One tip--if you are having trouble finding your leak, use glass cleaner to spray on your tire. The leak will froth bubbles and it really stands out. It is also a good way to check your work at the end. The repairs strips are vulcanized and supposedly a permanent fix. So far, so good. Not a bit of leakage.

My only *minor* gripe is that the case for the kit is larger than it needs to be. They do make the same kit that comes in a smaller, more compact storage bag, but it costs about $10 more. I'll end up transferring it to my own bag and ditching the plastic container.
Read more
8 people found this helpful
Helpful
Comment Report abuse
See all reviews

Brenda Scott
5.0 out of 5 stars Excellent quality product
Reviewed in Canada on January 10, 2020
Verified Purchase
Great price and super fast delivery. Haven't had the need for it but very happy we got it for our summer car. Am looking at getting a 2nd one for our winter car.
Read more
Report abuse