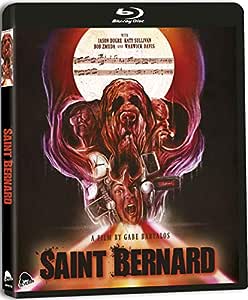 His award-winning FX career spans both grindhouse (BRAIN DAMAGE, FRANKENHOOKER, the LEPRECHAUN series) and art-house (Matthew Barney's CREMASTER CYCLE). Now writer/producer/director Gabe Bartalos brings his own years-in-the-making vision to the screen, as an unhinged orchestra conductor named Bernard (Jason Dugre of Bartalos' SKINNED DEEP) graphically descends into a surreal odyssey of chaos, psychosis and "f*cked-up sh*t that looks cool as hell" (Bloody-Disgusting.com). Warwick Davis (WILLOW) and notorious Andy Kaufman cohort Bob Zmuda (MAN ON THE MOON) co-star - with a performance by punk legends The Damned - in this "must-see for the truly adventurous" (UnseenFilms.net), transferred from the original negative and unleashed beyond the underground festival circuit for the first time ever.

The Making of SAINT BERNARD.
Trailer.

A one-of-a-kind film… Had it been released in the mid-1970's would have attained classic midnight movie status. --UnseenFilms.net

A hell of a film… Gorgeously shot, painstakingly crafted and clearly incredibly personal. Gabe Bartalos is an unsung legend. --BostonHassle.com

Top-shelf weirdo eye candy… The production and set designs are dizzyingly intricate, and the practical effects are often astonishing. --DailyGrindhouse.com

3.2 out of 5 stars
3.2 out of 5
12 customer ratings
How does Amazon calculate star ratings?
Amazon calculates a product’s star ratings based on a machine learned model instead of a raw data average. The model takes into account factors including the age of a rating, whether the ratings are from verified purchasers, and factors that establish reviewer trustworthiness.

N Mansell
5.0 out of 5 stars Like a long "Liquid Television" episode. Very cool.
Reviewed in the United States on March 19, 2019
Verified Purchase
I'm with Felix. This film shows some very imaginative visuals. Does a film need to be completely cohesive to be a good one? I don't think so. If you're looking for something to take you on (many) a "trip", and feel like watching dreams and nightmares unfold for an hour plus, there are few I'd recommend higher. It was a treat to see things so well crafted, and I'll say again: imaginative.
Read more
4 people found this helpful
Helpful
Comment Report abuse

Amazon Customer
2.0 out of 5 stars Not that great.
Reviewed in the United States on January 6, 2020
Verified Purchase
I like movies that are different.They don't even have to make sense.I at least want cool images that will stick in my mind for a very long time.I read the reviews for this movie and thought it would be right down my alley.It did not live up to the hype.To sum this movie up,a guy in a white suit goes from one weird image to another.The images are not all that inspired.If you want to watch a weird movie that is a total delight watch Santa Sangre.
Read more
Helpful
Comment Report abuse

Mark A. Sayles
4.0 out of 5 stars A head trip.
Reviewed in the United States on July 18, 2019
Verified Purchase
It was a real trip. Lots of visual eye candy not a lot of sense.
Read more
One person found this helpful
Helpful
Comment Report abuse

william1
1.0 out of 5 stars Your guess is as good as mine.
Reviewed in the United States on March 14, 2019
Verified Purchase
Not sure what this is, or why it was "Years In The Making"?
Read more
Helpful
Comment Report abuse

FelixTheCatastophe
5.0 out of 5 stars Surreal, Dreamlike and Bats**t Crazy!
Reviewed in the United States on March 15, 2019
Directed by special effects wizard Gabe Bartalos (Basket Case 2, Texas Chainsaw Massacre 2, Friday the 13th Part VI, Brain Damage and MANY more), "Saint Bernard" is a cult horror movie lover's dream (or Nightmare) about a classical music composer named Bernard (Jason Dugré) who slowly descends into insanity. Even if you don't love the film for it's story (it's not an easy one to follow as "surreal" would be putting it lightly) I gave this film five stars because the special effects and puppetry are truly amazing. In a world ruled by CGI, there's something to be said about the artistry of practical effects. The film features lots of fun cameos including Warwick Davis (Leprechaun, Harry Potter, Willow), horror movie legend Frank Henenlotter (Frankenhooker, Brain Damage), Bob Zmuda (Man of the Moon, and "Tony Clifton) and more. Horror and cult movie fans will LOVE this.
Read more
4 people found this helpful
Helpful
Comment Report abuse

B&S About Movies
TOP 1000 REVIEWER
4.0 out of 5 stars Completely insane
Reviewed in the United States on May 7, 2019
Writer/producer/director Gabe Bartalos' award-winning FX career spans everything from films like the Leprechaun series, Brain Damage and Frankenhooker to Brain Dead, Dolls, The Texas Chainsaw Massacre 2, The Cave, Happy Hell Night and Gremlins 2: The New Batch. He was even the Muck Man in Spookies!

Now, he finally is bringing his long-in-production film Saint Bernard to video thanks to Severin Films. Prepare your eyes and brain, if you can!

An orchestra conductor named Bernard spends the film descending further and further into chaos, insanity and surrealistic imagery, aided and abetted by Bartalos' FX talent. Also: Bernard finds a Saint Bernard head on the side of the road that he puts in a bag and takes with him everywhere.

If you're one of those people that demand a film that makes sense, you may want to look elsewhere. For those of us willing to descend down this portal, we'll be rewarded with a phantasmagorical odyssey into the heart of, well, something pretty messed up.

Warwick Davis - yes, from Willow - shows up, as does Andy Kaufman co-conspirator Bob Zmuda and the Damned. Bartalos created the Leprechaun and Tony Clifton makeup, so it makes sense that he was able to get those talents in here, if anything makes sense in this movie.

Basically, all I can tell you is that Bernard is a conducted attuned to the universe who has a bad performance due to his suit being filled with drugs and then he descends into a journey that introduces him from everything to a money-obsessed priest to the charms of Miss Roadkill.

The funny thing is, as disgusting as some of these set pieces get, they're all gorgeous. It's one thing to create these art installation-like sets. It's quite another to frame and shoot them in a way that pushes them even further up the ladder of art.

Again - this isn't for everyone. I'd compare it to an absolute movie in the style of Jodorowsky and that's no small praise.