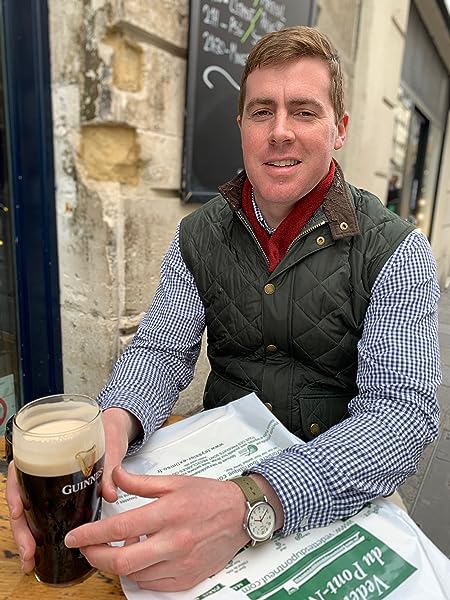 Saint Brigid, the Celts and the Early Irish Church Paperback – May 25, 2020

by Justin R. McCarthy (Author)
4.6 out of 5 stars 40 ratings
See all formats and editions
Sorry, there was a problem loading this page. Try again.

This book is both a history of Ireland during Brigid’s lifetime (from the mid fifth century to the early sixth century AD) as well as a biography of the saint herself. It begins by examining the Celtic people, their way of life and their pagan beliefs. This includes a detailed look at the Celts’ religious leaders, the Druids. We’ll then deal with the conversion of Ireland to Christianity and the unique nature of the early Irish Church. The remainder of the book will be an in depth examination of Saint Brigid’s life, the founding of her monastery at Kildare, and the lasting impact she has had on Catholicism both in Ireland and throughout the world.
Read more
Previous page
Next page

Hello and thank you for visiting my author page! I live in western Massachusetts where I've practiced law since 2010. I have a wife, two daughters, and a beagle named Winston. I hope you enjoy my books and if you have questions or comments I'd love to hear from you. All my contact information is available on my website: justinmccarthy.org.

DONNA M LAKATOSH
5.0 out of 5 stars Perfect gift!
Reviewed in the United States 🇺🇸 on September 18, 2022
Verified Purchase
Pretty small cross but the woman i bought it for is petite. I'd keep this in mind if the recipient has a thick neck or is on the larger size. The cross will be dwarfed.

The book was interesting.

I loved this gift purchase.

Bill
4.0 out of 5 stars Who was St Brigid.
Reviewed in the United States 🇺🇸 on April 28, 2021
Verified Purchase
A very easy, short read. For me, this was beneficial. I just wanted a glimpse of St Brigid and her times and her importance to the Irish. It is a brief glimpse. To that extent, it is a good read.
Read more
2 people found this helpful
Helpful
Report abuse

J P Romack
3.0 out of 5 stars A satisfying sketch of the saint and things Irish.
Reviewed in the United States 🇺🇸 on July 25, 2021
Verified Purchase
This is a quick and interesting read of Saint Bridget, Patrick, the Celts, the druids and growth of Christianity in Ireland.
Read more
2 people found this helpful
Helpful
Report abuse

martha dugan
5.0 out of 5 stars The clarity, organization and unpretentiousness of the book Saint Brigid is lean and provocative.
Reviewed in the United States 🇺🇸 on August 30, 2021
Verified Purchase
Saint Brigid: The Celts and the Early Irish Church, by Justin R. McCarthy

Very early in this beautiful and austere document, author, Justin R. McCarthy, vanquishes the self-loathing academics who subtract the existence of Celtic history and polity by dismissing them as infidels and non-believers. Here's author McCarthy's understated response to Simon James' academic construal that Celtic history and culture is delusional, and, basically, that Celtic mythology is a Brigadoon waiting to happen: "It's a shame because the Celts did indeed exist and they were some of the most interesting people in Western history.." And further from McCarthy: "Nothing about these quotes (including their authors' condescending tone) encourages us to keep reading." The endgame of McCarthy's highly organized and thorough study is formulaic: we need more and better scholarship about Brigid and Patrick, and Hugh O'Neill, and Shane the Proud, and so on, not less.

Organizationally, McCarthy's book contains a briefly annotated [Table of] Contents, fifteen carefully entitled chapters, and an MLA formatted "Notes" that is thorough, well-documented and easily accessible and resourceful. There's no quibbling with McCarthy's sense of organization and clarity. But beyond his publisher-ready front matter, McCarthy (in Chapter I) gob-smacks the reader (and Simon James) with a rhetorical backhand from the voice of British Letters himself: G. K. Chesterton. Here's Chesterton at his finest: "Who were the Celts? I defy anybody to say." McCarthy fairly responds to that throw-down with a forensic academic outlay including and incorporating historical data, examples and illustrations, authoritative quotes, quantitative data; and the essential weapon in academic writing: testimony. Here are a few examples of themes and topics in Saint Brigid that unpack and deliver questions and arguments for historical and anthropological inquiry: Brigid's name, her birth, youth, ordination, character and friends, Celtic history and Celtic character. Collateral discussion includes and incorporates (who else?) St. Patrick, the Druids, the Celts, Brigid's death, her legacy, her cryptic reliquaries, and of course, the central aspect of all "saints", their miraculous deeds.

Lastly, isn't it interesting that myriad scholars approach Brigid as a sideshow in Ireland's unknowable past. Brigid, like Jesus Christ himself, is everywhere, but nowhere. Meanwhile thousands, perhaps millions of tourists and pilgrims make arduous treks to the North and to Kildaire to see Brigid as well as the great man himself, Patrick of Armagh, lying in State in their coffins. On the other hand (conversely) the English have eschewed the sainted warriors of their ancient Christian past and, instead, have built mini-Gibraltars to the likes of Boudica, the head-hunter, decapitator and pagan serial slaughterer of hundreds of thousands (yes, hundreds of thousands) of Anglian and Roman warriors. The statue of Boudica in Westminster is equal to or greater than the statue of Richard the Lionhearted and, also, the cigar-chewer and dog whistle himself, Winston Churchill. And while I'm on the subject of Churchill, If anyone is ever in doubt about Churchill's suspect authenticity, read one chapter of historian Francis Parkman. You'll get the idea...

Purchase two or three copies of "Saint Brigid: the Celts & the Early Irish Church" by Justin R. McCarthy. Pass them among friends at dinner parties. It's essential reading. It's not cold and analytical like the silly books of many Irish and British historians; instead, it's akin to ready a book of personal essays such as "The Pine Barrens" by John McPhee. It calls to mind other diminutive but great histories of the old world such as "Ireland: The Graveyard of the Spanish Armada."

That's enough, that will say it all. I wish Mr. McCarthy and his family every success.
Read more
7 people found this helpful
Helpful
Report abuse
See all reviews