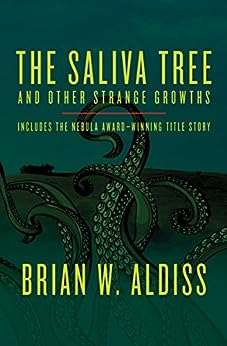 The Saliva Tree: And Other Strange Growths Kindle Edition

“Aldiss is a master of the form.” —The Guardian

“The Saliva Tree is an exuberant extended homage to [H .G.] Wells and the scientific romance tradition. . . . Aldiss wants to use fiction as a vehicle for talking about grand, abstract ideas, but he also wants to tell the stories of individuals.” —LocusOnline

“[A] great novelette . . . I have been reading Aldiss’s work with intense delight for something over forty-five years.” —Paul Di Filippo

Tom Welch
3.0 out of 5 stars So Many Typos
Reviewed in the United States on November 6, 2019
Verified Purchase
The stories were not as good as I thought they might be, and this edition had so many typos my enjoyment was lessened further.
Read more
One person found this helpful
Helpful
Report abuse

Kindle Customer
5.0 out of 5 stars Five Stars
Reviewed in the United States on November 6, 2015
Verified Purchase
fantastic writer - he might be best in this short story form.
Read more
One person found this helpful
Helpful
Report abuse

AutonomeusTop Contributor: Classic Rock
TOP 1000 REVIEWER
4.0 out of 5 stars Just a sampling of Aldiss's great stories, originally published in 1966
Reviewed in the United States on December 12, 2020
This collection of ten stories is just a sampling of Brian Aldiss's many brilliant stories. Seven of the ten, including the title story, were published in 1965 and 1966. I will present a short description of each along with the story's location in The Complete Short Stories, published in 2013 and 2015 (see my reviews of all five volumes published so far).

The Saliva Tree (The 1960s: Part 3, Chapter 7)
This story was written for the centenary of H.G. Wells's birth, and won the Nebula Award for Best Novella for 1964. It is a Victorian Age "War of the Worlds" tale of aliens landing on an English farm, with a Lovecraftian twist. H.G. Wells appears as a minor character.

Danger: Religion! (The 1960s: Part 1, Chapter 13)
This is one of quite a few Aldiss stories with terrible titles. I blame the editors. But the story is a clever tale of conflicts between "matrices" -- alternative worlds.

The Source (The 1960s: Part 3, Chapter 10)
Explorers pursue a quest on a far distant Earth that is way past its prime.

Legends of Smith's Burst (The 1950s: Chapter 53)
Also called "Sector Yellow," this is one of the stories collected in 1963 into the collection "Starswarm -- it is Chapter 6 in that volume. The story involves a sort of action-hero character trapped on a strange planet and tells of his attempt to escape.

The Day of the Doomed King (The 1960s: Part 3, Chapter 1)
This is a lovely non-science fiction story about a king of ancient Serbia. Aldiss wrote the story after traveling to Yugoslavia to meet with fans.

Paternal Care (The 1960s: Part 3, Chapter 21)
Another story with a terrible title, this is a very short, poignant, non-science fiction story of forbidden love.

The Girl and the Robot With Flowers (The 1960s: Part 3, Chapter 2)
This is a semi-autobiographical story about a science fiction author writing a science fiction story, which he describes to his wife. So the story is not science fiction, but contains a science fiction story in outline. Both humorous and affecting, it includes mention of the real-life SF authors and editors Poul Anderson, Jim Ballard, Harry Harrison, Mike Moorcock, and Fred Pohl. Ballard and Harrison were both close friends of Aldiss.

The last three stories are my favorites in this volume.

The chief virtue of "The Saliva Tree" collection as of this writing is its accessibility. But I recommend The Complete Short Stories instead. Aldiss, one of science fiction's all-time greats, was in my opinion at his best in short stories and novelettes, and there are many more (and better) stories found across the 149 stories he published from 1954-1969.

See my reviews of all five volumes.