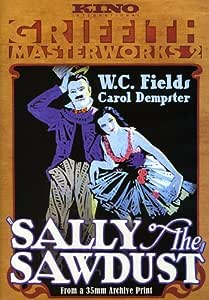 Sally of the Sawdust

In a fascinating departure from the austere moral drama in which he specialized, D.W. Griffith demonstrates his talent for warm-hearted comedy with Sally Of The Sawdust. Fresh from the Ziegfeld Follies, W.C. Fields made his second screen appearance as Professor Eustace McGargle, a lovably disreputable confidence man who becomes the unlikely guardian of an orphaned circus waif (Carol Dempster). Intending to return Sally to her grandparents, McGargle learns that her wealthy and esteemed grandfather (Erville Alderson) is a stern judge who harbors a deep contempt for shysters and show people. Faster than a sucker can say "three-card monte," McGargle finds himself wanted by the police and chased by bootleggers, while trying to protect his cherished Sally, who has won the affection of a slumming socialite (Alfred Lunt). Sally provided Griffith ingenue Carol Dempster (whose work for the director is generally overshadowed by that of her predecessors, Mary Pickford and Lillian Gish) with a delightful role: the spry, innocent and hot-tempered dancing girl wholly devoted to her criminal "Poppy." At the same time, it showcases the comic juggling and dry wit that would make a legend of W.C. Fields (who remade the film in 1936 under the title of the original play, Poppy.)

3.3 out of 5 stars
3.3 out of 5
29 global ratings
How are ratings calculated?
To calculate the overall star rating and percentage breakdown by star, we don’t use a simple average. Instead, our system considers things like how recent a review is and if the reviewer bought the item on Amazon. It also analyzes reviews to verify trustworthiness.
Top reviews

LI Techie
3.0 out of 5 stars Sally of the Sawdust - Three Stars but with extra treats for the buff
Reviewed in the United States on May 6, 2016
Verified Purchase
"Sally of the Sawdust" is a silent with a maudlin but often comic story line whose "side attractions" make it more likely some of us would want to see it.

"Sally" is the daughter of a mother who was banished from her once-patrician home because she married a circus feller. The mother dies soon after Sally is born buy the dying mother only worries that Sally should be taken care of. The father has earlier vanished from the scene in an unspecified manner and it falls to Prof McGargle (W.C. Fields), a good-hearted side-show performer and petty swindler, to write to her grandparents to let them know what happened to their daughter, but he doesn't mention Sally.

The grandparents don't respond and McGargle brings up Sally (Carol Dempster) as a sort of innocent (in the midst of carny types) coming into almost excruciatingly adorable young womanhood. Many events and misadventures intervene as Sally and McGargle barrel toward the ultimately happy ending.

It's hard to give a star rating to a movie like this. The story line is, as I said, both maudlin and comic and you know it is likely to all resolve to the expected resolution. Yet it is charming despite (or because of) Dempster's cute mugging and posing; W. C. Fields (only his second role, I understand) is delightful; a talented and natural comic and performer, very recognizable and entertaining despite the lack of his humorous voice. He's surprisingly skinny and light-footed and pulls off the doting "adopted father" well. Carol Dempster is interesting not only for her performance but for her reputed favor with Producer D.W. Griffith (he may have sleeping with her, so produced an atypical comedy for show her off); I have heard that other performers hated her because they said she had no acting style of own, but copied the styles of other actresses. And her being the producer's pet would not bring admiration.

The other "extra" that makes this interesting is that it is supposedly set in Connecticut but it was filmed on Long Island. Before I learned this I kept thinking that the extensive outdoor scenes, buildings and locales looked like Long Island. There is even a dirt crossroads with one of the signs pointing to Hicksville, a familiar Long Island town. So the movie is also a time capsule that I thoroughly enjoyed, notwithstanding my three-star review.
Read more
One person found this helpful
Helpful
Comment Report abuse

Tim Heintz
5.0 out of 5 stars A W. C. Fields and Carol Dempster Silent Classic
Reviewed in the United States on June 28, 2016
Verified Purchase
Sally of the Sawdust runs a little long, as do many D. W. Griffith films, but overall, it is a delight. Peppered throughout the film are examples of the "bits" that W. C. Fields is famous for. I am a big W. C. Fields fan and watched Sally of the Sawdust to see more of him, but this one had a surprise for me in the form of Carol Dempster. As Sally, she became for me the funniest woman in silent film. With the naiveté of Gilda Radner, the zaniness of many of the 20th century's great comedy women, and energy all her own, Dempster takes the show. At first, with just her eyes, and then with her entire body, she is lovable and laughable at the same time. I think Carol Dempster is the Buster Keaton of women.
Read more
One person found this helpful
Helpful
Comment Report abuse

Robert Ashton
4.0 out of 5 stars A "must" for Fields fans
Reviewed in the United States on February 12, 2000
Verified Purchase
A sentimental comedy with an inevitable happy ending but still good fun. Carol Dempster does a convincing job as a free spirited circus girl, Sally, brought up by McGargle (Fields, of course)after the death of her parents. The silent Fields shows his physical comedy skills, which are often forgotten due the later strength of his spoken comedy. The quality of the picture is excellent - again showing for me that B & W movies gain most from DVD if the manufacturers make an effort. A good movie for anyone to watch, it is a must for the Fields fans to see the earlier stages of the character that was to become so familiar in the later films.
Read more
21 people found this helpful
Helpful
Comment Report abuse

RoadTrip
4.0 out of 5 stars Gifted
Reviewed in the United States on February 2, 2020
Verified Purchase
Bought this for my dad because he loves Lauren and Hardy. He enjoyed it.
Read more
Helpful
Comment Report abuse
See all reviews

Page 1 of 1 Start overPage 1 of 1
This shopping feature will continue to load items when the Enter key is pressed. In order to navigate out of this carousel please use your heading shortcut key to navigate to the next or previous heading.
Back
Next
Pages with related products. See and discover other items: sally fields movies, sally fields, critics choice