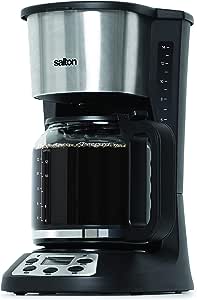 Visit the Salton Store
4.5 out of 5 stars 584 ratings
Available from these sellers.

The Jumbo Java brews a whopping 14 cups of coffee! With a 24-hour programmable timer, you can start every morning with a fresh cup of java. The keep-warm feature keeps your coffee at the perfect temperature and automatically shuts off after 2 hours. With pause and serve you can pour a quick cup of joe while the Jumbo Java is brewing. With its attractive design and stainless steel accents, this mammoth coffee maker is the perfect addition to the house (or office) of coffee lovers!

Wake up to freshly brewed coffee with the Salton Jumbo Java Coffee Maker. This 14-cup coffee maker has a 24 hour programmable timer. It includes a keep-warm plate that maintains the ideal drinking temperature. The attractive stainless steel accents are perfect for any kitchen.

4.5 out of 5 stars
4.5 out of 5
584 global ratings
How are ratings calculated?
To calculate the overall star rating and percentage breakdown by star, we don’t use a simple average. Instead, our system considers things like how recent a review is and if the reviewer bought the item on Amazon. It also analyzes reviews to verify trustworthiness.

frank goeth
5.0 out of 5 stars Great coffee maker.
Reviewed in the United States on December 16, 2017
Verified Purchase
Another update: Well, its been 3 years and this pot is still going strong. None of the button lettering has wore off like other pots. I've yet to drip from the spout and it still make me a few pots of coffee a day. This is hands down the best coffee pot I've ever owned.

Another update: this is still a great pot. No spill spout is the best I've ever used and still works like new.

Update,,,,, it's been over a year and still brewing great.

First cup tastes pretty good, not a huge plastic taste like with other new pots I've had in the past. It has a smaller footprint than our old 12 cup maker so that's a bonus. It was easy to set the clock and program. Hopefully this works for a good long time. So far, I'd recommend buying this coffee maker. Updated to add, we took a chance on the larger Bunn coffee filters and they work great as this pot brew fast so the grounds tend to get in the coffee but now it's perfect. This pot is a winner.

Jules Agee
5.0 out of 5 stars Finally, I have found the perfect coffee maker.
Reviewed in the United States on January 20, 2018
Verified Purchase
A few years ago, I had one of those bottom-of-the-line $18 Mr Coffee units with no auto-shutoff. We forgot to turn it off once, and the heating element burned out. Then we went through about five other coffee makers, from $40 to $90, and none of them was any good at all. Some had over-complicated designs and leaked, some made awful coffee. One didn't use a carafe, it just had a push-button spigot that filled your cup directly from the coffee maker (but only if your cup has a thin lip on the edge, otherwise, coffee everywhere). Seriously, is it really so hard to build a decent coffee maker? So, we ended up with the second-cheapest Mr. Coffee, which had an auto-shutoff and made good coffee. The clock was tricky to set, and the time was off by 17 minutes per day, which made the brew timer feature useless. This was especially annoying because the LEDs in the clock were blindingly bright, and never showed the correct time. But it was 'good enough' until a household accident killed it.

So we took a chance on this Salton unit. It's works well, the clock is accurate, and I like the large carafe. There are no unneeded features, it's simple and easy to use, makes good coffee, and I can actually prepare it the night before to automatically make coffee in the morning without having to reset the clock to the correct time. It's actually pretty similar to the $22 Mr. Coffee, but easier to use, with a bigger carafe, and a clock that works properly.
Read more
65 people found this helpful
Helpful
Comment Report abuse

Bill
1.0 out of 5 stars Yet another crappy coffee maker
Reviewed in the United States on October 28, 2018
Verified Purchase
If you are brewing crappy coffee that comes in a giant can for $5, this will probably work fine. People who buy and enjoy premium coffee though will be disappointed by this coffee maker. The problem that is all too common- the brew temp is way too cold. I measured a max of 175 at the water sprayer above the basket, 160 in the basket, and then 155-160 in the coffee pot. Unless you get to a minimum of 180, and really more like 190+, you just can't brew smooth coffee. I've experimented with 6 different coffee making machines now and the only one I have that makes a decent volume of hot, smooth coffee spills the ground into the coffee. Plus this maker was obviously a returned item, which I am also going to return.
Read more
30 people found this helpful
Helpful
Comment Report abuse

Patrick
5.0 out of 5 stars Definitely worth the money!
Reviewed in the United States on January 2, 2018
Verified Purchase
It may be a little less sophisticated in how it operates? The carafes may be a little lighter in construction? And Salton's idea, (as with all manufacturers) , of how much 14 cups is, as apposed to what I think 14 cups are?
This is actually a very good coffee maker. Definitely worth the money!
[Update] - I have one suggested upgrade if wanted? I like my morning coffee stronger than anyone I know! If that sounds like you? I found that by upgrading to a replacement gold filter really helped! They're available here on amazon.com, and allow for the extra amount of ground coffee needed! Only drawback is they ship from China, so expect 3 weeks for delivery!
Read more
43 people found this helpful
Helpful
Comment Report abuse

Erin
5.0 out of 5 stars Excellent coffee for a basic maker
Reviewed in the United States on June 11, 2018
Verified Purchase
After searching quite some time for a new coffee maker, i settled on this salton. Overall it is a very basic coffee maker, but it satisfies most of the gripes that were in the reviews of more expensive makers. The brewing temperature seems to be on point, the lid is removable from the pot, there is plenty of room to pour in water without spilling, and it comes with a mesh basket filter which does not require the use of paper filters. You can't beat it for the price point. I recommend giving it a shot.
Read more
23 people found this helpful
Helpful
Comment Report abuse

kcalrn
5.0 out of 5 stars Pours coffee with no spills
Reviewed in the United States on September 9, 2018
Verified Purchase
I had never heard of this brand, but I bought this coffee pot because it was size 14-cup and it had good reviews. I am more than pleased with the coffee pot ... it pours better than any other coffee pot I have owned, even when full. Visiting relatives commented how easy it is to pour coffee from this pot. Buttons are easy to use for setting time. We do not use the program functionality, so I cannot comment on this. I definitely would buy again!
Read more
21 people found this helpful
Helpful
Comment Report abuse

KBTop Contributor: Pets
2.0 out of 5 stars Be Gentle with it.
Reviewed in the United States on October 24, 2018
Verified Purchase
PLEASE NOTE - this is an update to our original review after only having this coffee maker for a few weeks.
Be gentle with it's finishes, particularly the heating plate. After less than 60 days (daily use) the heating plate is losing it's black finish and turning into a rusty flaky mess. We will keep using it but it probably won't last into next year (it's late November now). Too bad we missed the return period or it would be on it's way back to seller. Otherwise it is a bit flimsy (the lid for adding brewing water is wobbly). Much cheaper than a Cuisinart, but will actually end up being more expensive when we have to toss it. Makes a very large pot of 14+ cups.
Read more
14 people found this helpful
Helpful
Comment Report abuse

Daniela
5.0 out of 5 stars Love this Coffee Maker!
Reviewed in the United States on February 13, 2018
Verified Purchase
Love that this has 14 cups - it really makes a difference. Looks great with my other stainless appliances. Carafe does not spill when pouring. Easy to use. Great cup of coffee!
Read more
18 people found this helpful
Helpful
Comment Report abuse
See all reviews

colin dykhuizen
5.0 out of 5 stars Very happy with this product
Reviewed in Canada on December 4, 2018
Verified Purchase
The first thing I love about it is getting those 2 extra cups... There was something missing in my life all these years and it was one more cup of coffee in the morning.

The overall feel of the device is great. The pot pours without spilling and dribbling like other have in the past. The clock and timer is easy to set and operate and even a brief power outage of 2 minutes did not reset the clock which is very nice to see.

We've been using this pot for a couple months and we've been very happy with the design, feature, and build quality.
Read more
Report abuse

Mathieu V
3.0 out of 5 stars Leaking coffee maker
Reviewed in Canada on September 26, 2020
Verified Purchase
See those lovely drops of water and that open lid?

When it goes past 8 cups, the lid pops up. And voila, hot water mess on the counter. Because it gets really hot.

Huge let down, I was looking forward to keeping this one.

I have removed half a cup on the countertop.

No thanks
Read more

Liam
5.0 out of 5 stars A GOOD CUP OF COFFEE
Reviewed in Canada on December 20, 2019
Verified Purchase
WE BOUGHT THIS MAKER OVER MANY OTHERS BECAUSE OF PRICE / SIZE FACTOR...MAKES A GREAT POT OF COFFEE BUT I ADVISE PLAYING WITH IT A BIT...USING THE SAME AMOUNT OF COFFEE WE USED ON OUR OLD MACHINE WE MADE OUR USUAL POT IN THE MORNING...WAS VERY STRONG...WE HAD TO CUT BACK ON AMOUNT OF COFFEE A BIT; MAYBE ½ A SCOOP TO SUITE OUR TASTES...VERY HAPPY WITH OUR CHOICE...
Read more
Report abuse

susanna
4.0 out of 5 stars Coffee maker
Reviewed in Canada on October 8, 2020
Verified Purchase
It does the job. Simple function.
Read more
Report abuse
See all reviews