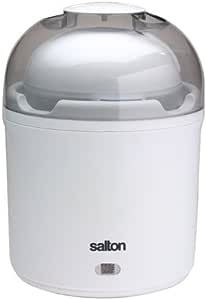 Visit the Salton Store
4.1 out of 5 stars 608 ratings
Currently unavailable.
We don't know when or if this item will be back in stock.

Make your own healthy, nutritious yogurt with this easy to use machine. Just follow the supplied recipes to make preservative free, tasty yogurt. Use your own ingredients to make unique flavors. Takes from 4 to 10 hours to make, depending on desired tartness, for frozen yogurt, chilling the freezer for 2 more hours is required.

Yogurt is a great, guilt-free snack for both adults and kids. With this yogurt maker, it's easy to add favorite flavors--including exotic and sweet fruits, rich crunchy nuts, and natural sweeteners--to basic yogurt. Just follow the recipes, supplied by the manufacturer, and a nutritious snack, with very little fat and no preservatives (like most commercial brands), is not too far away. Making yogurt takes from 4 to 10 hours to process, depending on desired tartness of the batch. If you're looking for frozen yogurt, you do have to chill it for 2 hours in the freezer before consumption after it's made. The yogurt can be stored up to one week. --Teresa Simanton

4.1 out of 5 stars
4.1 out of 5
608 global ratings
How are ratings calculated?
To calculate the overall star rating and percentage breakdown by star, we don’t use a simple average. Instead, our system considers things like how recent a review is and if the reviewer bought the item on Amazon. It also analyzes reviews to verify trustworthiness.

DonC
4.0 out of 5 stars Mine cost $20, works great, but no need for the hassle suggested by instructions.
Reviewed in the United States on April 21, 2014
Verified Purchase
I bought mine several years ago @ $20, but at the current price I doubt if I'd buy another. It has worked flawlessly, and I use it 2 to 3 times a week. Some reviewers say it has no thermostat, but in all the years I have used it, I have had only one failure, and I run it summer and winter through wide variations in ambient temperature in the room with no difference in outcome.

Most importantly, you can skip the recommended hassle of heating the milk to near boiling and then waiting for it to cool, measuring temperature with thermometer, etc. Purchase fresh, 1% fat, organic, ultra-pasteurised milk. Warm the milk in microwave oven to bring it to temperature, a little over 100 degrees F. Once you observe how much time it takes your mirco to bring milk to temperature, you can dispense with the thermometer altogether.

I just fill the container with milk, run in micro for 3 minutes, add about a tablespoon of starter, stir, place mixture in machine, let it incubate for about 16 hours, and cool in fridge overnight. The home-made product tastes MUCH better than the Dannon plain yoghurt I use for starter. The entire procedure for starting a batch takes me about five minutes. I keep the starter batch in the fridge, and just when I have about used it all up, I can see traces of mould beginning to appear round the top edges of the container. In that case I simply eat what's left and purchase a new batch of starter.

I threw away the 1-quart plastic container that comes with the machine and instead re-use the Dannon 32-oz containers the starter comes in, which fit inside perfectly. The local Kroger house brand is cheaper but the container is too large in diameter and won't fit inside. I don't bother to sterilise the container and utensils; running them through a normal cycle in the dishwasher along with all the other dishes and utensils works fine.

I wish the little clock dial on top had a 24-hour scale instead of 12. I sometimes forget whether I started a batch and set the dial for AM or PM. After a few months of use the dial became hard to turn. I found I can press in on the hub on the underneath side while rotating it and it turns very easily.

If mine ever stops working, I plan to open it up and see if I can repair the heater. The current price is way too high.

esanta
VINE VOICE
5.0 out of 5 stars Excellent value
Reviewed in the United States on June 15, 2005
Verified Purchase
This little inexpensive contraption does exactly what it's supposed to do: keep a warm, temperature controlled environment at the ideal temperature to incubate yogurt cultures.

Unlike most other yogurt makers, which come with a bunch of little pots, take up a lot of space and cost twice as much, this one is very small yet makes a whole quart of yogurt at a time in a single container: fewer parts to wash make for a happy me, and it's easy to put away in a cabinet because it takes very little space.

I tried using starter from the health food store; didn't quite like the taste, and it was expensive. I found out the Horizon plain non-fat organic yogurt with live cultures works great and tastes wonderful when used as a starter.

I originally tried to follow the recipe supplied: heat a quart of milk and 1/2 cup of fat-free evaporated milk to 180F, let it cool off to 112F, mix the starter, plug in and incubate for 6 hours. Works great, but I just don't have the patience to monitor the milk. Lately I've been experimenting and I found this method gives great results: mix 1/2 a pot of yogurt, 1/2 cup of evaporated fat-free milk, and 1 quart of fat-free organic milk together in the pot, start the machine, come back 12 hours later, done.
I also found out that the 1 quart tall containers cottage cheese or Strauss organic yogurt come in fit perfectly in the yogurt maker, and I've been saving them and using them instead. Works great and keeps the cleaning up to an absolute minimum.

Don't pass up this cheap little machine. It costs half as much as the other yogurt makers, is more convenient and takes up less space. Salton did a great job on this one.

Update: several months later, and I've been using this great little machine several times a week. It's still working perfectly, but I've experimented some more and gathered some information from yogurt-making friends. As it turns out, I was using way too much starter: a tablespoon is more than enough.
Also, I no longer use dry milk but found out a teaspoon of molasses does a great job at thickening the yogurt. Make sure you don't leave it in too long.
Against the recommendation of some of my cookbooks, I am now using a hand blender to mix the ingredients.
My initial opinion still stands: if you eat a lot of yogurt, you will love this little machine!
Read more
28 people found this helpful
Helpful
Comment Report abuse

Jim M
1.0 out of 5 stars Extremely poor shipping plus unit got too hot and killed yogurt culture
Reviewed in the United States on September 20, 2019
Verified Purchase
This unit replaced the same model that we have had.. This unit was shipped in only its display box...gash in one side of box. Also the unit got too hot and killed the yogurt culture. We replaced this unit with one from Luvele….what a difference. The Luvelle unit has 3 temperature settings that are extremely accurate. It was after using the Luvele unit that we realized that the Salton unit that we originally replaced was not at the correct temperature...the difference in the Salton yogurt vs.the Luvele yogurt is amazing. Extremely happy that we returned the Salton unit and replaced that with the Luvele unit.
If I could give the Salton unit zero stars, I would!!!
Read more
Helpful
Comment Report abuse
See all reviews

Page 1 of 1 Start overPage 1 of 1
This shopping feature will continue to load items when the Enter key is pressed. In order to navigate out of this carousel please use your heading shortcut key to navigate to the next or previous heading.
Back
Next
Pages with related products. See and discover other items: warm things, cheese display, cheese maker, storage container for ice cream, Best Rated in Yogurt Makers, yogurt lids