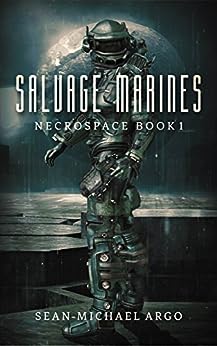 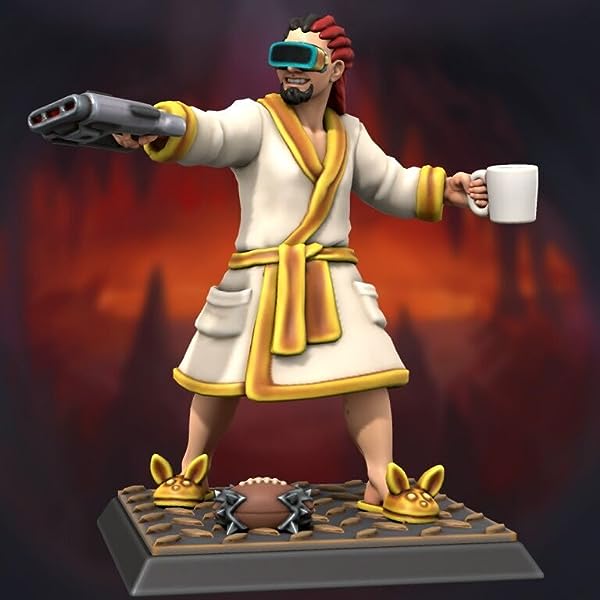 by Sean-Michael Argo (Author) Format: Kindle Edition
Book 1 of 6: Necrospace
See all formats and editions
Sorry, there was a problem loading this page. Try again.
To protect his young family from merciless corporate tyranny, Samuel Hyst signs up for the hazardous life of a salvage marine, the foot soldiers of a militarized deep space operation. Hazard pay is high for a reason, and Samuel must endure grueling tours of duty in the abandoned scrapyard quadrants of a war-torn universe.

Endless wars rage across every galaxy, leaving damaged starships, rusted factories, and broken planets in their wake, all ripe for plunder by the desperate and the daring.

Samuel must seize his destiny in frenzied combat against murderous scavengers, horrific monsters, and the elite mercenaries of rival corporations.

Left with no choice but to fight, he must win freedom with a combat rifle and his blowtorch.

Thank you for joining me in Necrospace...
The adventure continues in:
You might also like my other tales of war and adventure:

Space Pirate from the planet Earth, just waiting for Elon Musk to finish building my ship.

Join the Adventure over at https://seanargo.wordpress.com/ and check out my film studio at www.cinegeaux.com

3.9 out of 5 stars
3.9 out of 5
85 global ratings
How are ratings calculated?
To calculate the overall star rating and percentage breakdown by star, we don’t use a simple average. Instead, our system considers things like how recent a review is and if the reviewer bought the item on Amazon. It also analyzes reviews to verify trustworthiness.
Top reviews

Jas PTop Contributor: Star Wars
VINE VOICE
4.0 out of 5 stars Fast Paced Mil Sci-Fi, Outstanding and Captivating Story – Clever Back Story – Must Read!
Reviewed in the United States on December 4, 2016
Verified Purchase
This is Military Sci-Fi as it should be, fast paced, actioned packed and in your face.
The story follows Samuel Hyst, who lives in this rather horrific system where you inherit debt as well as get debt for everything you do. What you earn is not really enough to pay off your debt.
Although you can get an education (that is added to your debt), you are assessed and given a job based on this assessment. If you don’t like your job, or just have enough of things, you can join ‘The REAPERS’.
These are the Marines, and once you read into this, you understand that in this budgetary society, that the Marines are the cheap option for resolving problems. They have low grade gear, very basic teaching, the only benefit is that they earn more money than any other occupation. And huge bonuses for active duty. Of course, they have to survive long enough to actually earn this. Or avoid getting wounded and having to pay for expensive medical care.
They fight on the front line, and once the battle is done, they then salvage the site/ship/hulk, shredding it for all the resources they can, swapping out rifles for blow torches (again, it's all about the bottom line on the budget sheet).
Samuel ends up joining the Reapers with his lifelong friend Ben, so that he can raise money for his young family. His relationship starts quite strong with his family, his wife and young child, but as the book progresses, it seems to drop off as his Military career becomes the focus. In reality, this is probably not far from the truth as a lot of military people tend to lose a bit of contact with their families when deployed.
There are multiple other characters that appear in the book, but all of them revolve around Samuel to some point or another. The other Marines in his unit, his best friend Ben, his Wife and their child. These relationships are all written with a real understanding of how military life impacts on a person.
Argo does a masterful job of describing the Marines in action, the shear brutality of combat, and the impact it has on Samuel, in his role as one of the Marines and as their Medic. We quickly see how it impacts his relationships within his unit and with other Marines, as well as other Military units. The writing is clever and intuitive, giving us real insight into the psychological impact this is having on him, without going so far into it so as to lose the feel of the Military Sci-Fi story.
This is a well-crafted, captivating story, and that if you love your Mil Sci-fi, you won’t put down once you pick it up.
I will be getting the 2nd book as I really enjoyed this one.
Read more
2 people found this helpful
Helpful
Report abuse

techspider
5.0 out of 5 stars Fantastic Read
Reviewed in the United States on January 1, 2019
Verified Purchase
I liked everything about this book. I liked the mix of sci fi military action, aliens, and dystopia of corporation's control. Can't wait to read next book.
Read more
One person found this helpful
Helpful
Report abuse

BOB
3.0 out of 5 stars Not a bad book
Reviewed in the United States on March 25, 2017
Verified Purchase
Not a bad book. I am an avid reader of 57 years. I read about two books a week which the majority of are sci-fi. It is not the worst and not the best I have read. It is what I have come to expect from most authors now. Predictable but enjoyable.
Read more
2 people found this helpful
Helpful
Report abuse

Overpaid Word Nerd
5.0 out of 5 stars What an amazing surprise!!
Reviewed in the United States on April 26, 2017
Verified Purchase
This was one badass book. Extremely well written, full of the perfect doses of action, paced brilliantly. I will definitely continue to read more from this author, starting with the next book in this series, right now...
Read more
2 people found this helpful
Helpful
Report abuse

MD
2.0 out of 5 stars A Warhammer fan -
Reviewed in the United States on March 1, 2017
Verified Purchase
Author obviously trying to follow the Warhammer 40K series stories. Not bad - just not enough meat to each book in this series. Some sharp points in the stories and a good premise overall. This could have easily been two books instead of several novelettes.
Read more
Helpful
Report abuse

Jennie Jon
4.0 out of 5 stars Engaging Story
Reviewed in the United States on July 23, 2016
Verified Purchase
This is a good story about people fighting in difficult situations. I like the characters and the basic story line. I am just starting the 3rd book in the series. Worth a few bucks and the time it takes to read it.
Read more
One person found this helpful
Helpful
Report abuse

Father Fly.
3.0 out of 5 stars Good Read - Space Opera at its best
Reviewed in the United States on August 9, 2016
Verified Purchase
Good space adventure. I enjoyed the hope of the main characters trying to find a way to escape the "company's" hold on their lives. Exciting moments with some tension about who will survive and continue to find their place as a salvage marine.
Read more
Helpful
Report abuse

Kim Norwood
4.0 out of 5 stars Solid, entertaining read
Reviewed in the United States on November 20, 2017
Verified Purchase
I enjoyed the book and look forward to reading another. Good combo of realistic material and social setting. The author has the ability to go in multiple directions with the universe he has built.
Read more
One person found this helpful
Helpful
Report abuse
See all reviews

Chris
4.0 out of 5 stars Good but lacks a little depth
Reviewed in the United Kingdom on July 29, 2016
Verified Purchase
Good book .... lacks a little depth but makes up for that in action. If you want a deep immersive read then it's possibly not for you. I'll be reading all three books in the series as I'm enjoying them.
Read more
3 people found this helpful
Report abuse

Sam McDermott
3.0 out of 5 stars One for the road.
Reviewed in the United Kingdom on May 24, 2017
Verified Purchase
Good read for the lunch hr or bus/ train to work, enjoyed the setting of the book, light on details in places and some predictable bits, made me drop a star but overall a decent read
Read more
2 people found this helpful
Report abuse

Amazon Customer
3.0 out of 5 stars Decent
Reviewed in the United Kingdom on February 14, 2017
Verified Purchase
Painfully average sci-fi book, story jumps around and its fight scenes don't come close to others I the genre, interesting world though that gave good context
Read more
One person found this helpful
Report abuse

Kindle Customer
5.0 out of 5 stars Great start!
Reviewed in the United Kingdom on January 7, 2017
Verified Purchase
Great start to what is looking to be an incredible series!

Keep up the good work!

David Hansford
5.0 out of 5 stars Well worth picking up
Reviewed in the United Kingdom on November 3, 2018
Verified Purchase
Simply a great read, good plot and pacing no fluff or padding
Read more
Report abuse
See all reviews