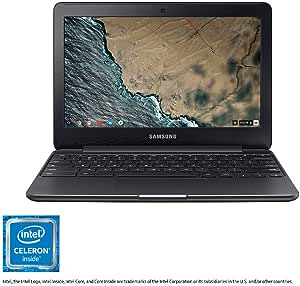 Buy this product as Renewed and save $29.00 off the current New price.

Simplicity meets value in the Samsung Chromebook 3, the browsing device the whole family will love. The durable frame handles whatever you and your family dish out—even an occasional spill. Watch YouTube videos, research for homework or check social media to your heart’s content, thanks to a long-lasting battery that lasts up to 11 hours. It’s everything you need and nothing you don’t.

The Chromebook 3 lives up to the quality you expect from a leading technology brand like Samsung, while providing an outstanding value.

Everything at your fingertips

Sign into your Google account and access your apps through Chrome OS, with your Cloud protected with built-in security. Free updates automatically give you the best of Google.

Built-in security features ensure you're protected from viruses and malware. No setup or long load times-simply log in with a Google account, and you're in. Navigate your world with Chrome OS. Get the best of Google, Gmail, Maps, docs and pics and back everything up safely in the cloud. And since your Chromebook gets free updates automatically, it will only get better. A battery that gets up to 11 hours on a single charge means you can view the news over coffee in the morning, CHECK emails at lunch then surf social media after dinner, all without having to recharge. Plus it's made for the long run, since it continues to retain most of its capacity even after 3 years' use. The strong design you'd expect from a reliable brand like Samsung. Go ahead, let the kids use it to watch movies during snack time, or keep it in the kitchen without worrying about accidents thanks to a water-resistant keyboard.

4.4 out of 5 stars
4.4 out of 5
1,343 global ratings
How are ratings calculated?
To calculate the overall star rating and percentage breakdown by star, we don’t use a simple average. Instead, our system considers things like how recent a review is and if the reviewer bought the item on Amazon. It also analyzes reviews to verify trustworthiness.

Theodore Bergmann
5.0 out of 5 stars The most affordable 64gb Chromebook on the market.
Reviewed in the United States on August 16, 2018
Verified Purchase
I’ve been using this Chromebook for about a week prior to writing this review. So far, I’m impressed with the amount of value Samsung brought to this device. The N3060 processor is perfectly suitable for my daily tasks. This Chromebook is able to stream 1080p/60fps videos, load ad/image-heavy websites relatively fast, multitask without slowdown, and run Android apps/games well. For example, 3d games such as Max Payne, GTA San Andreas, and Star Wars KOTR from the Google Play Store are perfectly playable at their default settings (If you’re wondering about the controller, the DualShock 3 is compatible with this model).

As for the general build quality, I have no complaints. The spill-resistant keyboard is comfortable to type on, the mousepad is responsive, and the design of this laptop both looks and feels more premium than the price suggests.

The only downside I have for this laptop is the screen. Compared with my old Chromebook, the Acer Chromebook 11 (2016), it’s no contest. The IPS screen on the Acer Chromebook has much better viewing angles and the colors are more saturated. That being said, I wouldn’t say that the screen on the CB3 is bad. The colors are decent when you find an optimal viewing angle and the anti-reflective screen is well suited for brightly-lit environments. You can tilt the screen about 30 degrees outside of the optimal viewing angle before the colors get washed out. Also, I've had no issues running this Chromebook through my 1080p monitor.

In the future, the Samsung Chromebook 3 will have Linux support with Crostini. Currently, you can switch this Chromebook to the Canary channel to test this feature out. Unfortunately, I was unable to get Linux to work because of mounting issues. Hopefully Google will get this feature ironed out in the future, since having 64gb of storage is optimal for installing a plethora of Linux apps.

To conclude this review, I’d recommend this Chromebook to anyone that wants to install both Linux apps (either with crouton or crostini) and Android Apps on their Chromebook. Having 50gb of usable internal storage makes this Chromebook an excellent device to use both online and offline.

Pros
1. Decent processor with 4gb of RAM
2. Anti-glare screen
3. Comfortable keyboard and responsive trackpad
4. Less than $300
5. 8-10 hours of battery life
6. Google Play is supported and Crostini (Linux apps inside Chrome OS) is coming in the near future.

Cons
1. Colors get washed out when the screen is tilted out of optimal range.
2. Quiet speakers

The Samsung Chromebook 3 officially supports Crostini Linux in the beta channel. Even though I initially had a few issues getting the terminal to install on this Chromebook, Linux apps work quite well. For example, the Libre Office suite (a Linux substitute for Microsoft Office) works very well and I haven't experienced any crashes with it. The same thing can be said for Filezilla, Gimp photo editor, and GnuCash.

However, if you're using Linux apps that rely on sound and video/graphics (Spotify desktop, VLC Media Player, watching videos through Firefox, games with Steam), the performance is quite laggy and all of these apps have audio problems (scratchy audio or none at all). Therefore, it still has a long ways to go when it comes to replacing a dedicated Linux distro.

If you're interested with a smoother Linux experience with this Chromebook, I'd recommend installing Gallium OS and dual boot it with chrx. I was able to get Counter Strike GO playable through steam (at very-low graphics) and the rest of the apps I've had problems with in Crostini worked in Gallium.
Read more
247 people found this helpful
Helpful
Report abuse

True Southern Girl
1.0 out of 5 stars Do NOT recommend....keep looking....seriously
Reviewed in the United States on November 3, 2019
Verified Purchase
This thing is awful. It is crazy slow, like early 90s slow, there is no reason this product should be this slow in 2019. I was hoping to use this to help me run my Etsy store but its print capability is an absolute joke. The screen quality is terrible also, my father's hand me down laptop from the 90s had better quality than this screen does. Imagine an average screen quality with poorly applied protective plastic film left on, that's almost as bad as this. I'm sorry I keep referencing the 90s but I just can't believe that Samsung of all companies would put their name on this piece of garbage in 2019!
I can pretty much do more on my phone than this thing. I wanted to return this but the return window closed last week so now I'm stuck with this thing. My review is soley to encourage you to NOT purchase this product.
Read more
97 people found this helpful
Helpful
Report abuse

Kacey Lauren
5.0 out of 5 stars Definitely a good little machine for the price!
Reviewed in the United States on October 18, 2018
Verified Purchase
So, I'm going to be comparing this Chromebook with the really well rated Asus Flip. I wouldn't have changed, except for the fact that the screen on my Flip cracked when I was bumped into and dropped my backpack.

Pros:
It just looks more expensive/high end. The Asus Flip, in my opinion, looks cheap. This laptop looks like a sleek little machine.

The screen is sharper and the colors are brighter.

Nearly $80 cheaper for the same specs. The Flip has a touch screen, sure, but not a very good one. I constantly found it registering touches all the way across the screen from where I touched.

The hinge feels very durable, far more durable than the Flip. The Flip hinge wobbled every time I even used the touchscreen.

Touchpad flows a lot better and it's slightly bigger.

Cons:
The keyboard is noticeably smaller, so I find myself making a few typing mistakes. I'm sure this will go away as I use the laptop more and more.

The charger!!! Really, Samsung? A unique charger in this day and age? It was so nice to only have to carry one charger for my phone, laptop, and Switch (USB-C for all 3). This laptop has a unique charger and it's really irksome. The future is USB-C, and I'm not sure why Samsung refuses to jump onboard.

Like other reviews have said, it does get smudgy. I would invest in a skin or a hard snap on case.

Overall, for the price, it is great. I bought this in a pinch because my Flip screen is totally destroyed from the drop and I'm a college student who needs a laptop. I would definitely recommend this laptop over the Flip.
Read more
136 people found this helpful
Helpful
Report abuse
See all reviews