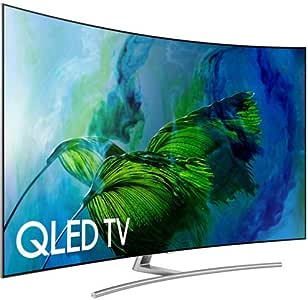 Visit the SAMSUNG Store
4.0 out of 5 stars 17 ratings
| 21 answered questions
Currently unavailable.
We don't know when or if this item will be back in stock.

The Next Innovation in TV

QLED is the most spectacular TV by Samsung yet.


With an unbelievably brilliant picture made possible by over a billion shades of color, this QLED Smart TV produces images you have to see to believe. With 100% color volume thanks to the proprietary Quantum Dots, this QLED Smart TV delivers exceptional color and brightness for an immersive viewing experience. As smart as it is beautiful, this QLED Smart TV knows what’s connected and lets you control everything with one remote. (Samsung Q6 does not have same features/specs as other QLED TVs.)

The no-bezel design and clean brushed metal back look gorgeous front to back, whether mounted on a wall or sitting on a stand.

Lets You Control Everything with a Single Remote

Turn Your Phone into a Remote

The Smart View app lets you control your TV and streaming services, plus push content from your phone onto your TV.

How does High Dynamic Range (HDR) improve the TV image?

HDR allows for very bright and very dark objects to be shown on the same screen with no loss in signal or resolution.

This TV is Ultra HD Premium Certified. What does that mean?

The certification is given to TVs that meet or exceed strict performance levels for resolution, high dynamic range, and wide color spectrum.

Is the One Connect box included?

Yes! The One Connect Box is included. It connects your components away from the TV so you can avoid unsightly clutter.

How can I tell which devices are connected to the 4 HDMI inputs?

Auto-detection makes switching between your devices easier by calling each device by name.

Introducing QLED TV. An unrivalled, realistic picture made possible by a billion unique colors created by Samsung’s proprietary Quantum Dots. See it all come to life on a sophisticated 360 Degree Design featuring a sleek, metal back and curved screen that draws you into the action. The Invisible Connection streamlines and simplifies connections to other devices. As smart as it is beautiful, QLED TV recognizes what’s connected to it and lets you control what you want to watch, all with one remote.

4.0 out of 5 stars
4 out of 5
17 global ratings
How are ratings calculated?
To calculate the overall star rating and percentage breakdown by star, we don’t use a simple average. Instead, our system considers things like how recent a review is and if the reviewer bought the item on Amazon. It also analyzes reviews to verify trustworthiness.

Kenneth M. Kilpatrick
5.0 out of 5 stars Best 75 inch TV you can buy!
Reviewed in the United States on February 20, 2018
Verified Purchase
Wow, all I can say is WOW! I did extensive research before I purchased this TV and my time was well worth it! Reds are presented like I have never seen on a TV. Colors in general are just richer. For example, I play a game called Destiny 2 on Xbox one X which has 4K ability. When I purchased this TV and played the game, there were LITERALLY New colors being presented while playing. It is like going from black and white to full color to summarize the difference. Everything about this TV is brilliant. From the gentle curve which is easy on the eyes to the Artwork like Backside of the TV done in a very nice Aluminum. Even the stand looks like something that should be in a Museum. The whole TV is a piece of artwork and the picture it displays is the best i have ever viewed. Purchased this from Vanns of Amazon and Yes it comes in a Sealed box, full warranty from Samsung and delivery was prompt and courteous. Other than moving to a 75 in ch OLED, which is still in the near 10 grand market, you will not find a better picture on any Television. Even then you will not get the BRIGHTNESS that the QLED technology can present. If you are debating on it, make the plunge because I have zero reservations about my purchase. I just get a grin on my face when I sit down to watch a movie or show now. Literally changes your entire viewing experience. Nice Job Samsung!
Read more
5 people found this helpful
Helpful
Comment Report abuse

Amazon Customer
1.0 out of 5 stars ** DO NOT BUY THIS** 120 POUND BRICK FROM BAD FIRMWARE - BAD DESIGN MAKES FIX IMPOSSIBLE!
Reviewed in the United States on April 23, 2018
Verified Purchase
** DO NOT BUY THIS** THE WORST EXPERIENCE YOU COULD EVER IMAGINE

I barely have the energy to write this but I'm doing it for my fellow TV seekers, because you should not have to deal with what I had to go through. I will really try and be brief because its just SO much to write about the entire ordeal.

I ordered this TV and it was DOA. It weighs over 120 pounds and is not really possible to be moved alone. The box is absolutely enormous, good luck storing it even if you have a garage. Long story short, the TV uses a new remote design which uses IR infrared for the power button, but otherwise requires a bluetooth sync with the TV itself to function. The TV has only a single button on it, very hidden, to also control power. There are no other buttons whatsoever.

Samsung screwed up and shipped bad firmware on some of the TVs, and also pushed that software out to some people who already own them, bricking the TVs. The problem manifests as an inability to pair the remote to the television, so what you will be left with out of the box after all the unpacking and setup (and wall mounting if you are really unlucky) is a television that asks you to choose a language after you power it on, but for which you cannot actually make a selection, because the remote cannot be paired to the television, because the firmware installed breaks the bluetooth controller inside the TV set itself.

All you will see is the message "NOT AVAILABLE", over and over, no matter what button or combination of buttons you press (besides power). This is the telltale sign of this issue.

I spent WEEKS going back and fourth with Samsung, while they tried all the steps their knowledgeless "techs" can read from their wiki on the other end of the phone in India. They have seen this problem before, and it is all over the internet, but because the TV is so large and hard to move they try them anyway, wasting your time and possibly running out your return time window.

First, I was supposed to be sent a new remote to try, but a USB key arrived with new firmware on it instead.
Then, when requesting the remote again, it didn't show up for a week, after which a call revealed they screwed up and didn't send it.
It then took them another week+ to mail the new remote, which finally arrived, but did not fix the problem, because the problem is not the remote (which works on other TVs at BestBuy BTW), but the TV itself and the broken bluetooth controller.

TO MAKE MATTERS WORSE, flashing the new firmware requires that you navigate the UI menus of the television to trigger the update, which you can't do if you don't have a working remote! A CRITICAL design flaw. Samsung confirmed to me there is no way to trigger the update any other way. Oh, and the one button on the TV itself (power) cannot be used to progress the menus because only power/channel/volume/source are available as selections, no affirmative "go/return/enter/accept" option.

There is so much fail here, from the broken software, to the obviously ineffective QA, to the bumbling tech support, and in the end what they did was ship a HUGE, HEAVY item all the way around the world from Asia, only to brick it completely with bad software, and create a system which cannot be flashed to fix problems, and has a single point of failure. The level of fail is beyond measure....

If you buy this and you have this problem, you will be so soooo angry and dissapointed, and even if you don't, you could get it in the future, as Samsung has shipped bad software before tha was installed automatically via auto update on the TV. Google it! See how people have been bricked overnight. It can't be fixed, and requires an in-person service tech or a return (if you still can!). What if you live in a rural area? GOOD LUCK!

Absolutely DO NOT buy this.

naswakilies
1.0 out of 5 stars One Connect is not working
Reviewed in the United States on August 16, 2018
Verified Purchase
The TV is fantastic but one day after i started using it I started getting a display issue. Its seems like the One Connect is not sending signal to the TV, and if i restart the One Connect it will come up for like one a minute or seconds then it will go to blank screen just an audio. Please can you help??
Read more
3 people found this helpful
Helpful
Comment Report abuse

fishbrain
5.0 out of 5 stars Easy all the way
Reviewed in the United States on August 23, 2018
Verified Purchase
Easy all the way. Carried in set up made sure it worked. 15 minutes later injoying new 75 in curved TV.
Read more
2 people found this helpful
Helpful
Comment Report abuse

I. Cristina
5.0 out of 5 stars XPO (horrible) Samsung TV ... wonderful.
Reviewed in the United States on March 12, 2018
Verified Purchase
The TV is speechless .. (Amazing) but delivery service XPO, I hope this Tv still good for 4 years.. and I don't have to deal with company anymore.
Read more
2 people found this helpful
Helpful
Comment Report abuse

Jimmy Ganann
5.0 out of 5 stars Amazing television
Reviewed in the United States on June 13, 2018
Verified Purchase
Incredible television. Arrived on time, and was easy to set up. I have had no problems yet...only 1st day, but so far we are very happy with not only the quality of the television, but the expedited shipping as well.
Read more