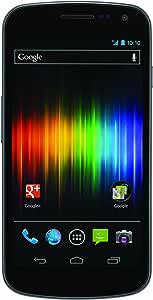 Visit the SAMSUNG Store
3.1 out of 5 stars 270 ratings
| 9 answered questions

The Samsung Galaxy Nexus is the third iteration of Google's Nexus program that offers the Android software exactly as Google designed it. The Galaxy Nexus features a gorgeous 4.65-inch HD-resolution OLED display, 1.2 GHz dual-core processor, 5-megapixel auto-focus main camera, a front-facing camera, WiFi, and super-fast 4G LTE data speeds. Other key features include 32GB internal storage, NFC technology, GPS navigation, music player, and access to thousands of apps, games, books, movies, and music available on the Google Play Store. This product is in heavily used cosmetic condition, it reflects significant use, and displays major scratches, blemishes and gouges. However, this product has been carefully audited, is certified to be 100% functional, and ready for activation.

The Galaxy Nexus is outfitted with a 4.65-inch HD Super AMOLED Contour Display (with curved glass), 5-megapixel camera with zero shutter lag and Full HD 1080p video recording, and a front-facing 1.3-megapixel camera for video calls on the go. It's powered by a dual-core 1.2 GHz processor that speeds up your web browsing, gaming, and multitasking.

The Verizon Wireless 4G LTE Mobile Broadband network provides speeds up to 10 times faster than Verizon Wireless' 3G network. With 4G LTE, you'll enjoy simultaneous voice and data capabilities, allowing you to check e-mail, browse the web, download an app, and check directions on Google Maps while on a call. You can expect fast download speeds of 5 to 12 megabits per second (Mbps) and upload speeds of 2 to 5 Mbps in 4G LTE mobile broadband coverage areas (learn more about 4G below).

Other features include a virtual onscreen QWERTY keyboard with enhanced auto-correction and touch recognition for a more natural feel, 32 GB of internal memory, 1 GB of RAM, and up to 12 hours of talk time.

The Galaxy Nexus has a full-featured 5-megepixel camera with automatic focus, top-notch low-light performance, and zero shutter lag. Open it right from your lock screen, and fire off a photo instantly. You can also take beautiful panorama pictures--just point and touch the shutter and pan your phone from one side to another. Android immediately stitches together an expansive panorama photo, ready to share.

A full-featured photo editor lets you add filters and effects, adjust color, straighten, reduce red eye, crop, rotate, flip, and even doodle on your favorite photos--right after you take them. Your edits are saved as a copy, so you can always get to the original.

Your photos can upload themselves with Instant Upload, which makes it much easier to share them with family and friends. If you've signed up for Google+, you can enable Instant Upload and share photos with anyone you choose.

Shoot video in Full HD 1080p, and snap still shots while you're at it. Continuous focus, real-time zoom, and time-lapse mode give you the power to shoot stunning videos. When your footage is ready, create your own movie with Movie Studio and upload it to YouTube. When you shoot videos, you can choose from a number of silly faces and other fun effects. Galaxy Nexus is smart enough to recognize individual facial features--give your friends big eyes, squeeze heads, make noses bigger. Or change the scenery with background replacement.

The Verizon Wireless 4G LTE network allows you to download photos, apps, and games in seconds and entire movies in minutes. LTE (or Long Term Evolution provides significantly increased upload and download speeds over 3G networks, as well as significantly reduced latency (or lag time). Verizon Wireless expects 4G LTE average data rates to be 5-12 megabits per second (Mbps) on the downlink and 2-5 Mbps on the uplink in real-world, loaded network environments.

With these blazing fast speeds, you'll be able to stream HD movies without the annoyance of constant pauses to buffer the video stream--as well as quickly download HD-quality movies right to your phone in minutes. Additionally, you'll be able to download a new song file in about 4 seconds or upload a photo to your favorite social networking site in about 6 seconds.

The Verizon Wireless 4G LTE mobile broadband network will also redefine the mobile office for business users. Business applications that used to require wired networks will be untethered forever, allowing you maximized productivity and efficiency while you're out of the confines of your office. Enhanced security lets you tap into most VPN networks with less waiting, and faster responsiveness enables you to upload 10 MB presentations back to your team in less than 25 seconds.

In areas serviced only by 3G, you can expect download speeds of 600 Kbps to 1.4 Mbps and upload speeds of 500 to 800 Kbps in Mobile Broadband coverage area.