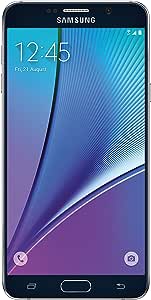 Shop the Samsung® Store on Amazon

A better way to get more done

Elevate your productivity with the reimagined Samsung Galaxy Note5, featuring the S Pen you'll only find with a Galaxy Note. The Galaxy Note5 lets you:

Elevate your productivity with the Samsung Galaxy Note 5, featuring a 5.7–inch display and a sleek metal and glass design. The S Pen helps you do more things, more precisely. Use the Galaxy Note 5 with a compatible computer to answer messages and calls from either device with SideSync. This Note 5 Will only Work on Verizon Wireless, will not work on AT&T or T-mobile

3.9 out of 5 stars
3.9 out of 5
835 customer ratings
How does Amazon calculate star ratings?
Amazon calculates a product’s star ratings based on a machine learned model instead of a raw data average. The model takes into account factors including the age of a rating, whether the ratings are from verified purchasers, and factors that establish reviewer trustworthiness.

TW B.
4.0 out of 5 stars Great phone - 95% satisfied. (I wish it had external SD)
Reviewed in the United States on October 1, 2016
Service Provider: VerizonColor: BlackSize: 64 GBVerified Purchase
Unfortunately this review comes a little late in the game, and likely wouldn't have even happened had I not smashed my Galaxy S5.
- Quick Background - I am in the tech industry by trade, and have been an android user since the Motorola Droid first arrived. My recording studio is exclusively Apple Products, though only out of necessity due to the software tools I create music with. (...and though I don't look down on the iPhone community, I personally would never choose to own one.) -

I don't jump on the finance and upgrade bandwagon, so I haven't used the S6, S7, or S7 Note/PocketBomb. They are probably exceptional pieces of hardware, though the reason I clung so tightly to the S5 was sheer durability. It just worked for me, aside from being just a tiny bit small for my hands. If it hadn't met an untimely death leaping from my car, it would, no doubt, have required extensive counseling.

The Note 5 is a powerhouse compared to the Galaxy S5.
The additional four (total eight) faster processor cores and additional ram (3Gb in all - S5 just 2) is more than a little noticeable. Multitasking is a snap for everything I do: Email/Text/Calls, Recording sound for later use, Maps, Ingress, Web Application like Soundcloud to manage the songs I post-

...you get the idea. I'm not leeched to my phone constantly, but I am a heavy multitasker when I do. It also fits perfectly in my man-sized mitts. My thumbs are no longer cramped - but most importantly - no one will ever read this. Let's be honest - this is old tech now. I could perfectly detail through eloquent fervor the ample screen's lush vibrancy, or use teh bestest of internet wordz 2 tell u how gr8 the pics r ...or even just simply go over the camera features -like the lens' quick focus speed...

Alas, you've all moved on to the new-new. So instead, I will sum up the phone in a Haiku that will live eternal via the interwebs long after I have been placed in the ground. Such is internet life: A vacant blip of Caligul-ain competition to be deemed valuable through written expression.

In this case, an outdated, though not yet obsolete device designed to mask it's guardian from the concept of a life wasted.
And now, your Haiku:

Bountiful Specs,
but no external SD.
Purchase without Fear.

Amanda
1.0 out of 5 stars Phone is in poor condition and should not have been sold.
Reviewed in the United States on April 14, 2017
Service Provider: SprintColor: BlackSize: 32 GBVerified Purchase
Phone came on time but upon turning it on.. It's pink. It looks like it was dropped in water and kicked around. The phone is horrible.
Read more

tee hee hee
1.0 out of 5 stars Phone is NOT functioning properly
Reviewed in the United States on June 17, 2017
Service Provider: AT&TColor: WhiteSize: 32 GBVerified Purchase
I am having terrible issues with this phone. People can not hear me clearly. Honestly, every phone call I make, the person I am speaking with indicates they can not hear me clearly or that I cut out completely. I really feel that a replacement phone is in order. I am hopeful that I will receive assistance from the seller regarding this issue. I believe replacement of product is in order.

UPDATED: Well it finally died and I took it to a repair shop. I bought a phone that was supposed to be new in package from an Amazon seller. It came in what appeared to be a new package The repair person who fixed it indicated it was definitely a refurbished phone he found another users thumbprint saved and remnants of other personal files. The battery had expanded and started pushing the back off the phone. I ended up paying over $100 to repair.
Read more
27 people found this helpful
Helpful
Comment Report abuse

John Hsiao
1.0 out of 5 stars I just try to love it. But after 3 months
Reviewed in the United States on March 13, 2018
Service Provider: VerizonColor: BlackSize: 32 GBVerified Purchase
Bought the Samsung Galaxy Note 5, Black 32GB from Cubic Wireless in Dec. 2017. It was not working well with the Verizon service. I went to Verizon twice and each time the Verizon tried new SIM card for it but I still not getting the cellular phone signal, I had to use Wifi calling future. The battery went to 0% in 2 hours after fully charged to 100% and only in standby mode. So since I bought it in "New" for $335, I just try to love it. But after 3 months, the battery situation is worse and the battery gets very hot while on charging. Last night, the back of phone even cricked for no reason, I did not drop the phone and it looks like the battery is expended and caused the back of phone cricked. I just turn it off and worry it will get fire. Verizon store person said maybe this is not a true "NEW" phone, it a furbished phone. I just wet into Verizon and get a new ASUS phone. Don't buy from this seller and don't buy Samsung Galaxy Note 5 phone. I am going to contact Samsung and see what they said about the battery and crack in the back of phone.
Read more
8 people found this helpful
Helpful
Comment Report abuse

CannyM
1.0 out of 5 stars Poor Inspections for Refurbished phone
Reviewed in the United States on February 3, 2017
Service Provider: VerizonColor: BlackSize: 64 GBVerified Purchase
Phone was supposed to be refurbished 9/10 rating. Phone arrived with half of Home button chipped off which would affect the fingerprint scanner. I bought this phone as a replacement, due to the first phone being defective. Better inspection needs done, both phones have issues.
Read more

MacNCheese
1.0 out of 5 stars Really?
Reviewed in the United States on December 14, 2016
Service Provider: SprintColor: BlackSize: 32 GBVerified Purchase
When I called to activate my phone the carrier stated the phone was lost or stolen. A waste of my time. Be careful
Read more
23 people found this helpful
Helpful
Comment Report abuse

Justin
1.0 out of 5 stars Nothing but defective phones.
Reviewed in the United States on August 13, 2017
Service Provider: VerizonColor: BlackSize: 64 GBVerified Purchase
I ordered 2 phones from Amazon. One from Redcell in which case the SIM card reader didn't work and one from Sikksound in which case the phone was just down right defective. The screen kept shutting off and coming on by itself and I would constant notifications about moble data turning on and off and a usb plug in when nothing was plugged up. I will never order another phone from Amazon.
Read more
13 people found this helpful
Helpful
Comment Report abuse
See all reviews from the United States

Page 1 of 1 Start overPage 1 of 1
This shopping feature will continue to load items when the Enter key is pressed. In order to navigate out of this carousel please use your heading shortcut key to navigate to the next or previous heading.
Back
Next
Pages with related products. See and discover other items: verizon plan, cell phones verizon wireless, 5 phone, new samsung galaxy note, samsung note phones, samsung on 5