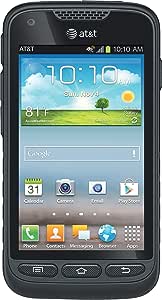 Built to withstand some of the toughest conditions. In military specification tests, the Galaxy Rugby Pro survived blowing rain and sand, high humidity and thermal shock. It has an anti-scratch touchscreen and backlit keys for easier operation in the rain or at night. The ultra-fast 4G LTE network and ability to use the phone as a portable WiFi hotspot make it the perfect companion for your travels. *SIM Card not included

The Samsung Galaxy Rugby Pro is a rugged Android (ICS) smartphone built for the needs of customers with active lifestyles or harsh business environments.

For Work or Play

Day-to-day or on the job, the Galaxy Rugby Pro fulfills all your smartphone needs with the physical strength to handle whatever life throws at it. It’s designed to handle the elements, and is waterproof* (submergible up to 1 meter for 30 minutes), dustproof, shock-resistant, and built to mil-spec 810g standards.

*Meets US Mil-STD 810g for Dust, Humidity, Rain, and Shock. Waterproof against incidental exposure to water when all ports are tightly closed. Not designed or intended for in water use. Submersible up to 1 meter for up to 30 minutes. Waterproof based on IP67 rating.

By the end of 2011, AT&T plans to launch its 4G LTE network in 15 major metropolitan areas, covering at least 70 million Americans. Coverage will continue to expand in the next few years and is planned to be largely complete by the end of 2013.

And when combined with 4G HSPA+ technology, AT&T is capable of delivering a quicker, more consistent mobile broadband experience than ever before. AT&T has deployed HSPA+ to virtually 100 percent of its mobile broadband network, which enables 4G speeds when combined with enhanced backhaul (via Ethernet or fiber). Backhaul is one of the major pieces of a telecommunications network. Think of it as the limbs connecting AT&T's cell towers with AT&T's backbone network that provides access to the Internet.