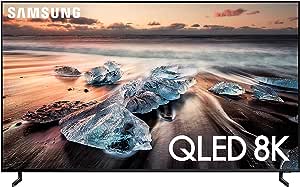 Visit the SAMSUNG Store
4.3 out of 5 stars 48 ratings
| 51 answered questions
Available at a lower price from other sellers that may not offer free Prime shipping.

With exceptional depth of detail, our real 8K resolution will draw you in to the picture.

Our most powerful processor delivers the ultimate picture, sound and smart experience.

The best Samsung HDR picture, from brilliant color to the deepest, darkest details.

*Luminance based on internal testing and is subject to change

Over a billion shades of brilliant color—powered by Quantum Dots—deliver our most realistic picture.

*QLED televisions can produce 100% Color Volume in the DCI-P3 color space, the format for most cinema screens and HDR movies for television.

Engineered to reduce glare and enhance color, providing a vibrant picture no matter where you sit.

Complements your space by turning a blank screen into enticing visuals or at-a-glance news.*

*Background feature accuracy may vary based on TV location and is dependent on wall designs, patterns and/or colors. SmartThings app on a mobile device (Android, iOS) is required for some functionality.

One Invisible Connection & No Gap Wall-Mount

Your TV hangs flush to the wall, while a single, slim cable connects everything.*

*A small gap between the wall and TV may occur if wall is not 100% flat or is constructed off-angle to the floor or if installed incorrectly.

4.3 out of 5 stars
4.3 out of 5
48 global ratings
How are ratings calculated?
To calculate the overall star rating and percentage breakdown by star, we don’t use a simple average. Instead, our system considers things like how recent a review is and if the reviewer bought the item on Amazon. It also analyzes reviews to verify trustworthiness.

rivercat
1.0 out of 5 stars Terrible terrible terrible
Reviewed in the United States on September 27, 2019
Size: 55-InchStyle: TV onlyVerified Purchase
This TV has the most terrible picture. I had a five-year-old curved Samsung 4K TV with a crisp, wonderful picture that I LOVED. When it went to TV heaven, I thought I'd upgrade. The picture on the 8K almost looks cartoonish. You get close to the screen and there is less -- not more -- detail. Faces l look like plastic and ears take on a life of their own. The picture regularly pixelates out. I'm sending it back and hoping for Samsung's sake it is defective and not the norm.

BTW, I use DISH satellite service and actually had them upgrade my receiver because I thought that was needed to support this new TV.

This is the BEST TV I’ve bought in a while, I’m so glad I finally got the new Samsung Flagship, Samsung has yet to let me down which I can’t say for the other manufactures. As an important side note Samsung’s 2020 sets will be out in the next month so I almost waited to get the QT800 8K’s but they are not coming out in the 55” version so if you are looking at getting a 65” or larger you might want to pre-order that model as there will be some improvements and the price difference in minimal. This TV has tons of APP’s but you’ll have to dig to get them added to your Home menu bar. If you’re looking to cord cut this TV has enough apps to cover most of your needs and will integrate Fire Sticks, Roku’s, or whatever else you want to attach. Unlike my old Samsung 4K Flagship this TV has the same issues as the Sony and Visio has with streaming from my Plex in UHD but you do have plenty of downgrading selections between the audio and picture streams to get decent playback when streaming.

The colors are fantastic with this set and the upscaling is superb, makes a big difference over the 4K TV’s especially with motion and high detail scenes. This TV outperforms all of my other high-end sets hands down at the same cost so this is a no brainer when looking for a high-end TV that isn’t going to suffer from Burn-in and highly lit areas. This set will perform better for gaming, movies, sports, and whatever you want to through at it, you can’t go wrong picking this set for your next purchase.

Sony’s Flagship
I’m a big A/V guy and I have lots of gear, I’m also very demanding and critical of my gear. A couple of years ago I bought Sony’s Flagship the Z9F 65” which is not cheap. I’ve always been a huge Sony fan when it comes to TV’s starting when the old picture tube (CRT TV’s) started the Bravia series. The Z9 was a total let down for me, the colors were vivd/rich and the darks were pretty good but the motion is horrible. Streaming is also poor as UHD movies would have lots of issues when streaming a source over 50Mbps and downgrading the stream rate doesn’t always work well either. Another thing I don’t like and it’s a common complaint with Sony is its proprietary approach to device compatibility, namely sound bars and surround sound systems in my case. Sony ONLY works well with SONY devices, I’m sorry but that is a deal breaker for me as I have high-end gear (THAT IS NOT SONY) which I need to connect to.

Visio’s Flagship
I have the Visio PX65, Visio’s Flagship and like the Sony it doesn’t stream well but is excellent for motion and has a very nice app GUI. What it fails in horribly is its gamut of colors. The colors are all off and have a phony presentation which is too bad because this set could be a serious contender at less than half the price of the other two.

UNPACKING
Buying a new TV today has gotten better as to its packaging, no matter if you buy a Visio, Sony, or Samsung they are all boxed in the same fashion. You cut the banding around the box lift up on the box top and the TV will be exposed in its base. The remote and power cord (accessories) will be packed in the top foam of the box. The TV itself should be in a bag with two handle cutouts to lift it out of its base foam, it’s important not to pinch the screen with force as it may damage the TV so the bag with handles prevents this possible damage. The front of the TV should be protected with cardboard and/or foam which I leave on until I get it mounted or in place on its stand in order to protect the screen during install.

POWER-ON
Make sure you have all devices plugged in to your TV and powered on as most new Smart TV’s will recognize and automatically setup those devices to the TV. Expect to spend at least 20 minutes when setting the TV up after powering it up as there are many things you need to configure plus the TV will want to do update(s) on initial setup. Most TV’s today come with a Calibrated Picture setting I would suggest trying that over Vivid, Standard, Movie, Sports, and other modes first, you can always change Picture mode later as required or Calibrate the TV to your needs. It’s great that the manufactures now provide this mode so that you don’t have to go through the hassle and expense of calibrating your set, and now most calibrated settings are spot on, but not always.

Roy (Virginia)
5.0 out of 5 stars Very nice TV
Reviewed in the United States on April 2, 2020
Size: 55-InchStyle: TV onlyVerified Purchase
This TV has a picture quality that is outstanding better than any that I have ever seen, The only thing I dont like is the remote I hate that thing it has NO numbers on it to type in a channel so you can go right to a different channel you have to you have to sacn around the channels to you come to the one you want, that sucks , if the remote had numbers you could type it in and go right to the channel, OH and it needs an audio out besides that optical cable thing, how about a conventional audio out jack, like the 3.5mm one
Read more
6 people found this helpful
Helpful
Report abuse

Roy
1.0 out of 5 stars Poor Product Quality and Customer Support Not Worth the Cost!!
Reviewed in the United States on December 18, 2020
Size: 55-InchStyle: TV onlyVerified Purchase
I ordered this TV on November 26th 2019. Close to a year before my one year warranty expired, I started seeing a line across the bottom of the screen, which I reported on November 19th, 2020. Photos are attached.

I called Samsung customer support and was promised a full refund by a service representative because they didn't have the replacement part available to fix according to the service rep. Days later, I was contacted by a local tech assigned to my case (and contradictory to what the support rep stated) stating they could fix my TV. I told them I was already promised a refund and told the local tech to reach out to Samsung to confirm. Rather than doing so, the tech somehow cancelled my support ticket entirely. Samsung had to reopen my ticket after my one year warranty period and is now refusing to service my TV, provide me with a replacement, or honor their promise for refund.

The TV itself was okay until this happened but I've seen 4K's that perform the same if not better (my friend's LG CX specifically) at roughly 60% of the price. This TV is not worth the cost given my poor experience with product quality and is definitely not worth Samsung's customer support attached (their customer service is a known issue if researched online that sadly is left unaddressed).

I recommend avoiding Samsung if possible and this is coming from someone who just spent over $10,000 in Samsung products in my home this past year alone.
Read more

sim
3.0 out of 5 stars $2000 TV fails to include 4 metric screws needed for wall installation
Reviewed in the United States on December 8, 2020
Size: 55-InchStyle: TV onlyVerified Purchase
This TV has not yet been turned on. When it arrived yesterday I was eager to hang it on the wall mount already in place. Then it turned out that four 8mm metric screws are needed to attach the TV to the brackets. These screws are not included with this $2000 purchase. What a bummer for Samsung to save a few pennies by forcing the purchaser to order and wait a few days for these little parts. No way to treat customers!
Read more
One person found this helpful
Helpful
Report abuse

Kenneth J Jefferson
5.0 out of 5 stars Great TV should have bought it sooner!
Reviewed in the United States on November 2, 2019
Verified Purchase
My Samsung TV is great.
Read more
2 people found this helpful
Helpful
Report abuse

Linda
5.0 out of 5 stars Amazing Picture & Sound!
Reviewed in the United States on July 29, 2020
Size: 55-InchStyle: TV onlyVerified Purchase
Super easy set up - SMART TV!! So ready for the future.
The picture is so unbelievably crisp and clear!
Read more
One person found this helpful
Helpful
Report abuse

Page 1 of 1 Start overPage 1 of 1
Previous page
Next page
Pages with related products. See and discover other items: Top Rated in QLED TVs