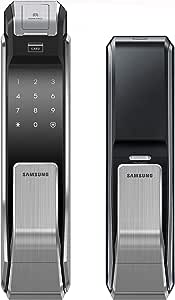 Visit the SAMSUNG Store
4.5 out of 5 stars 172 ratings
| 270 answered questions
Available at a lower price from other sellers that may not offer free Prime shipping.

Random Security Code - Before entering pin, 2 random numbers to push will appear. Throws off on-lookers and spreads your fingerprints around the keypad to prevent guessing of your passcode.
Double Authentication - 2 types of access (pin,fingerprint,RFID) are required to unlock door
Double Locking - Use this feature to prevent the lock from being unlocked from outside.
Anti Theft - Secure your home when your family is away. An alarm is set off when the lock is operated from inside; a sign of a thief trying to flee.
Mischief Prevention - After 5 failed entry attempts a warning sounds and the lock stops operating for 3 minutes.
Intrusion Alarm - If the door is opened while still locked an alarm will sound making the intruder less likely to stay.
Fire Warning - If temperature reaches a certain degree the thermal sensor will activate the alarm. The lock will auto unlock assisting to escape the fire.
Emergency Power - No battery; no problem. Simply use a 9V battery to power the lock and enter as usual.
Auto Locking - A physical sensor enables door to automatically lock after 3 seconds of being closed.
Proximity Sensor - Lock wakes when you walk up, ready for you to use.
Low Battery Warning - Lock will play Fur Elise after use.

4.5 out of 5 stars
4.5 out of 5
172 global ratings
How are ratings calculated?
To calculate the overall star rating and percentage breakdown by star, we don’t use a simple average. Instead, our system considers things like how recent a review is and if the reviewer bought the item on Amazon. It also analyzes reviews to verify trustworthiness.

Rayson Rodriguez
5.0 out of 5 stars Very advanced Smart Lock by Samsung
Reviewed in the United States on July 11, 2019
Size: SHS-P718 LMK (Small Mortise)Verified Purchase
So I'm rating this product five star.. it is a beautiful very premium Samsung product.. I like to be up to date so I purchase this Smart Lock for my condo Dominican republic.. so I never have to worry about the keys.. I have two finger register to the system not including the pin # that I put on it.. so far it's been about a year has been very reliable.. how about some good and Duracell battery for a have not run out of batteries yet and it's been over a year..the installation wasn't bad but I need a professional to install it since I didn't have the proper tools in that country..so if you're purchasing this you won't regret it is very stylish and beautiful
Read more
17 people found this helpful
Helpful
Comment Report abuse

Jay Falck
5.0 out of 5 stars As a techie, one of my favorite "toys"
Reviewed in the United States on June 7, 2016
Verified Purchase
I ordered this lock almost a year ago and it operated just fine until about 2 weeks ago. As we were leaving the house we couldn't lock the door and all keypad lights were on. I replaced all the batteries and it started working just fine until last night. Nothing I did helped. Finally contacted Samsung and got redirected to authorized dealers in the US. Neither returned my request for help. I realized even though I purchased through Amazon it actually came from HD Video Depot so I decided to give them a call. Robert answered the phone and it turned out he was the guy I needed to talk to. We tried a couple of things that didn't work. He suggested taking the lock apart and checking the wires to be sure they were secure. After reseating the wires and putting it all back together, voila, working lock. He even went to the effort of pulling out a lock and trying everything he asked of me and I could hear all the chirps of success on his side. Very helpful.
Read more
112 people found this helpful
Helpful
Comment Report abuse

BrainDoc
5.0 out of 5 stars Incredible Lock/Handset Combo, Installation a Bugger
Reviewed in the United States on January 1, 2019
Size: SHS-P718 LMK (Small Mortise)Verified Purchase
We have used other Samsung keyless deadbolt locks for a few years now, but I wanted this lock when we moved to our new house. It surpassed my expectations. Unlike the other Samsung locks, this monster will self lock only if you choose to. We hated the automatic self locking feature on the other lock. Having said that, this unit is expensive and took me 5 hours to install. Once you start, there's no turning back since you have to hollow out part of the door where the electronics go. I'm not sure the fingerprint version is worth the extra money. It works fine, but I usually use the RIF card or the keypad most of the time. However, the finger thingy is really cool. I do recommend watching the only video on installation. It has spanish titles, but no speaking, just the process of installation. You need to be handy and patient. The making of a pocket for the electrinics to fit into took forever with drill bits, chisels, etc. The two normal holes found in most doors will help some, but you will need to widen the bottom hole some using the enclosed template. Other than the physical work of hollowing out the door, the installation was somewhat intuative and went well. Programing also went better than expected, but I had to read and re-read the directions a few times. No need to reinitialize anything, the password was already set to 1234. Just push the registration button on back, enter 1234* and enter your new password. Do the same for the rif cards and fingerprint, only enter your new password first. Pretty easy. One final note, since we have this on "manual deadbolt close", not automatic, the door stays unlocked when you leave to go out, which is what we wanted. That is unless you swipe your fingers across the keypad, which will lock it. We do this when we are leavig and want it to lock. We have the choice. I must say the keypad is more responsive than my previous Samsung locks. Overall, well worth the cost and installation hassle, but not for people who aren't really handy.
Read more
12 people found this helpful
Helpful
Comment Report abuse
See all reviews

Jyhenn
5.0 out of 5 stars Good investment for your home 🏡
Reviewed in Canada on July 19, 2020
Size: SHS-P718 LMK (Small Mortise)Verified Purchase
One the home upgrade that i will not regert.
Installation might not he easy if you don’t have the right tools to remove some part of the wood in your door to fit the mortese,( i use the chisel amd drill ).
It’s a bit pricy but with the feature amd security features of the unit is really good.

Page 1 of 1 Start overPage 1 of 1
This shopping feature will continue to load items when the Enter key is pressed. In order to navigate out of this carousel please use your heading shortcut key to navigate to the next or previous heading.
Back
Next
Pages with related products. See and discover other items: push lock, latches and locks, Best screen doors for garage, Explore fingerprint locks for doors, Explore wifi password signs for home, Explore keyless smart door locks for offices