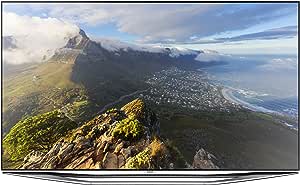 Visit the SAMSUNG Store
4.4 out of 5 stars 474 ratings
| 471 answered questions
Currently unavailable.
We don't know when or if this item will be back in stock.

4.4 out of 5 stars
4.4 out of 5
474 global ratings
How are ratings calculated?
To calculate the overall star rating and percentage breakdown by star, we don’t use a simple average. Instead, our system considers things like how recent a review is and if the reviewer bought the item on Amazon. It also analyzes reviews to verify trustworthiness.

Down Lo
4.0 out of 5 stars Plasma Will Always Be King!
Reviewed in the United States on December 22, 2014
Verified Purchase
Let me start off by saying that this was the Hardest TV to calibrate. I tried using the Disney WOW disc but was firmly dissatisfied with the results. I have been a plasma owner since 2007 with the introduction of the Pioneer Kuro (The Undisputed King of Televisions) even in the year of our Lord 2014. I believe that Pioneer came to the realization that they reached the pinnacle of picture quality and everything else would be just marketing gimmicks so we may as well shut it down. These new TVs are a perfect example of that hypothesis.

It doesn't matter which television brand you purchase they all have the same problem, Over-Processing! More than half if not more of the crap that they put into these TVs will eventually be turned off in the calibration process which makes no sense because these useless gimmicks were used to sell you the TV in the first place.

There will always be problems with LCD, yes LED is still an LCD TV. Although you can turn the backlight down it will always be On, so when it comes to 'True Black' you will never achieve it. LCDs are too bright for there own good. I like a TV to be somewhat a reflection of real life but with an LCD it is truly a daunting task to say the least. Finally, motion-blur! For those plasma lovers going from a plasma to an LCD can be a huge culture shock! Plasma is more 'fluid' in motion and excellent for fast moving scenes. Now the review.

This is the Big Dog! 75 inches of pure 'Say Whaaaat'? I was moments away from filling out the return form when something told me to change a few settings and BOOM! Perfection. Now my main purpose was size and I was willing to sacrifice things like black levels etc. I can happily say that I am thrilled with my results. Like I said LCDs are extremely bright so turn the backlight DOWN or you will have bleeding lights in the corners of the TV. Color reproduction is excellent and the color black (not the screen) is beautiful.

Professional calibrators are trained to adjust settings according to industry standards which is not always the average everyday persons' taste.
Your eyes are the best calibrators. Take the time out to explore your new toy and learn it. You will be amazed at your results. For those in the market for a 75 inch this may be your best bet. An 80 inch is over the top if you ask me because looking at this 75 I can see its pushing the limits of how much of a big screen is too big before it is no longer 'HD' quality. Remember, the bigger the screen the more the image is stretched which leads to artifacts you normally would not see in a 50-65 inch TV. Don't get me wrong, from a quality source or signal the images are stunning be it Blu-Ray or a good cable HD channel but the sheer size of the screen will show the quality of the source. Overall this is a great television that can challenge a plasma and can probably win a few rounds but in the end "Plasma Will Always Be King"!

Nikho
5.0 out of 5 stars Stunning picture quality. Shipping was a nightmare.
Reviewed in the United States on August 30, 2014
Verified Purchase
First thing first I'm the realist. It's hard to give this TV anything less than 5 stars, even though the FIRST TV that arrived to my door was crushed by what appeared to be a professional wrestler that happened to work for Pilot shipping company that day. I waited a total of 1 month of a damn TV that Best Buy would have price matched. But this review is about the TV and not the craptastic shipping company that Amazon used.

1. Setup was fairly straight forward w/ the exception of the WiFi network setup. I've done about 10 million wifi logins in my life so I assure you, I'm an expert, that and I'm Asian. I had my SSID hidden for obvious reasons, so I went through the manual setup as directed by the manual. However, no matter what I did, the Samsung UN65H7150 65-Inch would not recognize the WiFi network while the SSID was hidden. I restarted the router, tried other devices (ipad, macbook, phone) and they all worked perfectly even w/ the hidden SSID and easily accessed my WiFi network with the typical manual setup. After much deliberation, I decided to reset my router and have my SSID to broadcast. After broadcasting SSID, the WiFi login worked. Recognized my WiFi network and I was able to login. I then put the SSID back to hidden and the WiFi worked just fine after. This shouldn't be happening this day in age, hidden SSIDs are commonplace and rudimentary for basic security.

2. True HD quality content looks absolutely stunning, dare I say breathtaking? Typical TV viewing is what you would expect, it's good, but not great in comparison to Netflix streaming or a DVD / Blue-ray. The colors look fantastic and natural with different mode selection for viewing types.

3. I have my Xbox One as the main 'hub' for all my entertainment. Meaning my FiOS / Netflix / Hulu / TV all go through the Xbox One and in turn, I only have one HDMI cable going to the TV. This setup works perfectly for me since I only have to worry about 1 remote, which is my Xbox and not having to go through numerous remote control configuration options. YMMV depending what you like to do.

4. The TV runs HOT. It's very warm to the touch on the edges around the bevels. This normally wouldn't be an issue, and truth be told, it hasn't been for me. But it's definitely noticeable and an observation I thought worth mentioning. This TV could easily warm up a small room.

5. I can't comment too much on the SmartApps since I use xbox one version of all those apps.
Read more
4 people found this helpful
Helpful
Report abuse

Great gifts
5.0 out of 5 stars The picture on this beast of a TV is amazing
Reviewed in the United States on February 7, 2015
Verified Purchase
I bought this in November 2014 and decided to wait a bit and use the device for a while after I received it before commenting.

I took a huge risk ordering this TV online for it to be shipped to me as I live in Caribbean, but I'll never regret it. The service from amazon was great it actually arrived exactly on time and once I got it forwarded to me in Caribbean and unpacked it , all I can say is I'm still saying "WOW!!!!!!!!!!!!!".

The picture on this beast of a TV is amazing and processing the video at 240-hertz is beautiful, this is my third Samsung TV which I bought to replace another 60"Samsung smart TV that I have now moved to another room. this is my first 3D TV and I love the 3D viewing it spoils you to only want to watch 3D movies on this. The processor for me is brilliantly fast , but ensure that you update the TV set firmware for the initial setup and do all future updates once your prompted to by the TV. i would definitely buy this again.

i have seen reviews that are from bad to worst about this TV , but im hoping that this last me for years of viewing pleasure :-).
Read more
4 people found this helpful
Helpful
Report abuse
See all reviews