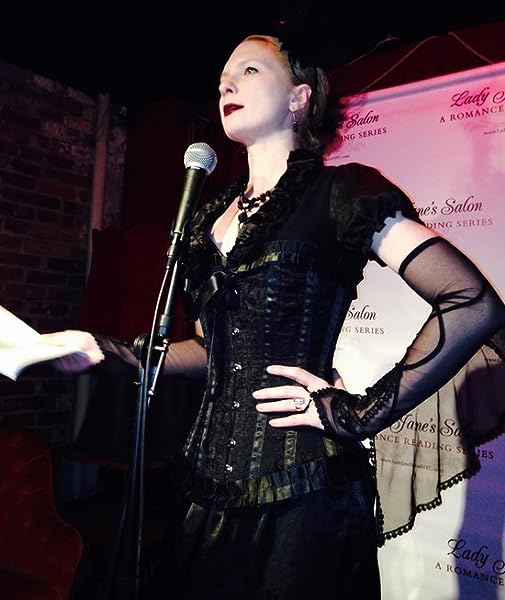 A Sanctuary of Spirits (A Spectral City Novel) Paperback – November 12, 2019

Never1701
5.0 out of 5 stars Subtle and Compelling
Reviewed in the United States on December 29, 2019
Verified Purchase
Eve and her stalwart team of psychics and mediums continue to delve into the case of ghosts going mysteriously missing with the help of Detective Horowitz despite the interference of an unknown group looking to prevent any communication with the spirit world. Despite their close calls in book one, Eve redoubles her efforts even when faced with resistance from the very spirits she's trying to protects as dozens of children's ghosts haunt her daily pleading for help but giving little or no guidance in how to assist them. Can she find the answers before she loses her own mind?

One of my very favorite aspects of Hieber is her world-building. The reader finds themselves immediately drawn into the time period and it's a lavish, compelling ride. The author finds a way to fuel her characters and her vision as if she has really spent time in the victorian era. She even throws in the occasional dashes from her previous work to lend the series a sense of history. Eve herself is the daughter of the heroine from Darker Still. I always like the sense of continuity in Hieber's book.

The author can really plot as well, there is a tangle of twists and turns that keeps the reader riveted to the story from start to finish. It is evident that Hieber thinks in the vein of books rather than just individual chapters and that she has already conceived of the end of the last book before the first chapter is ever written. I love the ominous nature of villains as well. It conveys a sense of nameless dread when there is no real clue who the bad guys are or really why they are doing what they're doing. Cleverly done.

I would be remiss if I didn't also mention the way she gives voice to her characters. Both in expository writing and dialogue, we are always in the heads of Eve and Horowitz from start to finish. We know what drives them, what hurts them and what insecurities help and hinder them. Could not put it down.

Rachel D. Moore
5.0 out of 5 stars I LOVE This Series!!
Reviewed in the United States on November 12, 2019
Verified Purchase
This book picks up right where 'The Spectral City' left off, with Eve and Jacob following Maggie to the mysterious Sanctuary of Spirits. And off starts another phenomenal addition to the series.

One of the things I liked best about this book is that we get a bit more of a peek into the private lives of our favorite Girl Squad and see them each develop a little bit more. And, as usually, Leanna Renee Heiber's writing is amazing. She has this amazing ability to write in such a way that is immensely evocative. Many times through this book I found it so easy to picture what was happening. And there are so many plot twists! Just when you think you have it figured out, you don't.

But the best part, in my opinion, is the developing romance between Jacob and Eve. The writer wasn't kidding when she said slow-burn. The teasing and near-misses and undeniable attraction had me nearly.pulling my hair out in frustration. But GOOD frustration.

The only bad thing I have to say about this book is that I have to wait a while year for the next installment. This book is SUCH a delightful and quick read. If you like strong women, ghosts, handsome detectives, intrigue, and MORE ghosts then you absolutely need to read this book!!
Read more
One person found this helpful
Helpful
Comment Report abuse

Cecilia Dominic
5.0 out of 5 stars The plot thickens...
Reviewed in the United States on December 10, 2019
Verified Purchase
Devoured this book on the planes to and from New York, which was perfect since that's where the book is set. The romantic tension in this story is great, and it was a lot of fun to read how the heroine experiences growing pains of all sorts, both with her talent and her personal life. At this point, the appearance of main and supporting characters feels like visiting with old friends, if one's friends lead very interesting lives and talk to ghosts. Can't wait for the next one!
Read more
One person found this helpful
Helpful
Comment Report abuse

stephanie miller
5.0 out of 5 stars Love, love, LOVE this series.
Reviewed in the United States on January 24, 2020
Verified Purchase
This book was engaging, well-written, and beautifully plotted. I read the whole series immediately and will eagerly await the next book.
Read more
One person found this helpful
Helpful
Comment Report abuse

Judith Starkston
5.0 out of 5 stars Highly Recommended
Reviewed in the United States on November 18, 2019
A Sanctuary of Spirits is the second in Leanna Renee Hieber’s absorbing Spectral City novels. The premise of this series is marvelously entertaining and thoughtful. Take a young woman, Eve, who can communicate with the dead, a dashing, intelligent Jewish detective, and a series of cold murder cases that will take something entirely out of the ordinary to solve. Tweak them into an alternative history in which Theodore Roosevelt, as Governor of New York, establishes the Ghost Precinct in the New York Police Department with Eve in command, ably assisted by several supernaturally talented women and a number of ghostly “assets.” Mix those elements together and ground them with superb use of historical detail. The results make for engaging fiction that defies a tidy categorization. I’d use a lot of words like historical, mystery, fantasy, Gaslamp, Victorian, paranormal and highly recommended.

Early in A Sanctuary of Spirits Eve’s staff conduct a séance. “There was a rushing sound through the room, in an ethereal echo, as if a great door had been opened.” One of the consulting ghosts brings them alarming information. A host of children has gathered. They’ve been wronged and need help, but these spirits cannot communicate the necessary details. That is up to the Ghost Precinct to uncover. The only clues the spirits can offer come when the angry children throw open locked file drawers of old, ignored cases. Files and papers fly onto the floor. This mesmerizing scene continues: “’Find us…’ came a murmur that consolidated from the voices, the words racing around the room in a freezing chill, though no spirits could be seen to have made the declaration. It came from the fabric of the air itself, repeating again, in aching earnest. ‘Come find what we’ve lost!’”

Little do the women of the Ghost Precinct realize that they are being drawn into a twisted plot masterminded by someone who can harm even the dead. Throughout the smart untangling of this macabre scheme, Hieber builds up the sensuous chemistry between Eve and Detective Horowitz—a relationship Eve views as entirely forbidden. She cannot let herself be sidetracked from her passionate belief in this new form of crime solving and the positive view of spirits that it will offer the world.

Hieber explores the realms of death with creativity and sensitivity in a rich mix of Victorian Spiritualism and cross-cultural ideas. She weaves these philosophical strands into a page-turning, dark tale where art, death, and the human yearning for exaltation collide in murderous ways.
Read more
One person found this helpful
Helpful
Comment Report abuse
See all reviews from the United States