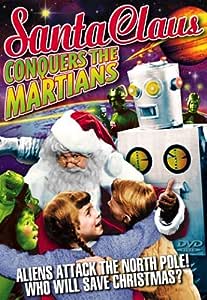 Santa Claus' workshop is invaded by Martians who want to kidnap St. Nick and take him back to their planet.

4.3 out of 5 stars
4.3 out of 5
238 global ratings
How are ratings calculated?
To calculate the overall star rating and percentage breakdown by star, we don’t use a simple average. Instead, our system considers things like how recent a review is and if the reviewer bought the item on Amazon. It also analyzes reviews to verify trustworthiness.
Top reviews

Hose Knows (aka Jinzo Ningen)
5.0 out of 5 stars Ho-Ho-Holy crap! You'll be singing "Hoo-ray for Santy Claus!" to celebrate the hi-def release of this heinous holiday favorite!
Reviewed in the United States on February 11, 2017
Verified Purchase
BOTTOM LINE: A legendarily awful yuletide motion picture, fully deserving of its Ed Woodian reputation. An amazingly wretched relic from the good old days. Proof that drugs & alcohol are often used on motion picture sets, (and strongly recommended for those of you at home contemplating watching this of your own free will). Let the tinsel-trimmed torture begin! 5 STARS

THE STORY: The listless children of Mars just sit and sulk, much to the confusion & consternation of their parents. Consulting with their high priest, the Red Planet's leaders are informed that their computer-taught & chemically-controlled children are essentially being denied their childhood. If such a joyless existence is allowed to continue, in another generation or two the entire Martian race faces extinction! Simply put: the depressed tots are in desperate need of fun & happiness! What to do? Why... kidnap Santa Claus, of course! (?) To accomplish this task, a rocketship of stealthy Martian commandos is sent to Earth. Once there, the Martian meanies strongarm a couple of precocious Earth children into pointing the way to Santa's Workshop. After some not too perilous peril, involving a rabid polar bear attack & the mechanical menace of the Martians' robotic enforcer, Torg, the two kids & jolly old Saint Nick are whisked away to the Red Planet, instructed to cheer up the mundane lives of all the sad Martian kiddies.... or else!

THOUGHTS: As mainstream moves go, SANTA CLAUS CONQUERS THE MARTIANS surely must rank as one of the oddest ever made. The entire cast is made up of unknowns, except for a young pre-celebrity Pia Zadora, as Martian tyke, Girmar, and Ned Wertimer, as KID-TV reporter Andy Henderson. (Wertimer's main claim to fame was portraying Ralph, the eternally-shafted doorman on The Jeffersons). All of the actors play the film completely straight-faced, with nary an eye-roll nor stifled giggle to be found. Astonishing, considering the ridiculous costumes, totally unconvincing make-ups and thoroughly atrocious "special effects" the film contains. (All of which would be right at home in a typical third grade Christmas play.) Seriously, one need only look as far as the 'terrifying' polar bear and "Torg" the Martian robot henchman, to see that the film's total F/X budget couldn't have exceeded $125, tops. Still, the movie somehow manages to be entertaining, in a twisted sort of fever dream/train wreck way. It's better viewed in the terrific Mystery Science Theater 3000 version, which is perhaps their best holiday effort. (Although it's a close tie with their lampooning of the Mexican-lensed Christmas catastrophe, "Santa Claus.") Viewed as-is, SANTA CLAUS CONQUERS THE MARTIANS takes a strong will (or some strong drink) to make it through in one setting. Very young children, undoubtedly the target audience of this film, may well enjoy it. Anyone over the age of six or seven will likely be reaching for the remote or an air sick bag (or both).

THE BLU-RAY: While not an ultra-sharp frame-by-frame restoration, this film, (up until now consigned to faded, washed out, jittery junk quality Public Domain copies), looks better than it has in years, perhaps since its theatrical debut. It's not as good as it could look, but it's likely due to the condition of whatever source materials Horizon/Kino Lorber had to work with. The video still contains a fair amount of debris and grit, but far less than I've seen in previous PD releases. Thankfully the color palette here is quite strong in comparison to the wretched PD stuff. Audio is a mostly clear & level mono. An eclectic assortment of bonus goodies round out this Blu-ray release. Best of the bunch is the compilation of theatrical bumpers, shorts and holiday-related bits touted as "The Retro Holiday Film Festival." There's also a cute Fleisher Christmas cartoon, some old commercials and a short Howdy Doody clip. Pretty neat stuff.

H. Annen
5.0 out of 5 stars A charming, wacky, mash-up of Santa and 1960s sci-fi
Reviewed in the United States on April 16, 2016
Verified Purchase
If you have never seen this film and have no idea about the story-line, but are intrigued by the title, it's easy enough to get some background from the film with a web search. If you *have* seen 'Santa Claus Conquers the Martians' (SCCM) then there is a fair chance the you remember, at the very least, fragmented images of the Jolly One interacting with green-skinned people with 1960's 'futuristics' sets, props and costumes. If you have not seen the film and do a search, be advised that there are lots of harsh reviews of this film on the internet. Take these with a grain of salt. They seem to be written by individuals who do not seem to understand that -- however goofy the premise, acting, props, etc might seem to us now -- SCCM is a fairly typical science-fiction-themed novelty film of the early 1960's. (If you want to get a sense of what flim-making this era was like, watch 'Matinee' (1993) with John Goodman.) 'Exploitation' films in general are conceived and executed with virtually no concern for their 'shelf life'. Consequently, time is seldom kind. What sets SCCM apart from its many peers that have settled into comfortable (and sometimes justifiable) obscurity is the presence of The Big Man, making SCCM a 'holiday' film. Holiday movies have a life of their own. Many of the most notable contributions to the holiday film genre -- 'It's a Wonderful Life', 'A Christmas Story' -- have been low-budget affairs that, *because* they were holiday films have exhibited exceptional longevity for what are, in the parlance, 'B' movies. While not nearly as clever or artistic as the films mentioned, the fact that SCCM is one a very small number of 'sci fi holiday' films has allowed it to live on and, amazingly, receive a digital remastering. SCCM has it's own special charms, which are, admittedly, not for everyone, but if you are a fan of the Jolly One, 60's sci-fi, or just looking to add an obscure 'holiday' film to your collection, SCCM might just be worth the price of admission.
Read more
10 people found this helpful
Helpful
Comment Report abuse

Bibliotecaria
4.0 out of 5 stars Fun, campy 60's scifi flick
Reviewed in the United States on April 10, 2019
Verified Purchase
A crisis on Mars calls for a special Santa mission to Earth; Martian and Earth children play a big role in the action, as do Santa and his workshop!

I enjoyed this film much more than I expected! It was so interesting to see the similarities between this and the scifi TV show that started a year later--Lost in Space--as well as Star Trek a decade later. While the set is obviously bare-bones and low-tech (cardboard and metallic paint) and both plot and acting are unsophisticated, some of the performances are pretty fun. Santa Claus was particularly good, as was his Martian "counterpart." There aren't too many Christmas films that have a scifi element. Worth seeing!
Read more
3 people found this helpful
Helpful
Comment Report abuse

Andy McKinney
VINE VOICE
2.0 out of 5 stars A charming Christmas tale for five year olds
Reviewed in the United States on October 16, 2020
Verified Purchase
I found this impossible to hate, even if the widely shared criticism of the movie for poor production values, terrible acting, and a ludicrous storyline are all true. They just don't matter. This film is not meant to be taken seriously by people who have outgrown the Santa myth. Most kids have shucked the myth off by the time they reach first grade, about age seven. So the target audience is younger and less sophisticated than first graders.
Some good things-it is light-hearted and upbeat all through the film. The bad guy had a mustache. We get to see B-52 bombers flying not as antique relics but as first-line bombers. The US Space Force is mentioned only 56 years prior to its establishment. Nostrodomas phone your office.
Riddle me this---What is soft, green and you toast it in the fire? A Marsmallow!
A five-year-old would think that was brilliant humor, even today.
This is a must-see for Piz Zadora fans as this was her very first film. She plays an eight-year-old but I don't know how old she was.
The jokes, the acting (or overacting), and the general tone of the film reflect what we could see on a Saturday morning kiddie show in those days. We should keep that in mind and be generous.
And yes, it is awful but not awful for the kids it is meant to entertain for a little while at Christmastime.
Read more
Helpful
Comment Report abuse
See all reviews

Stilton Sam
2.0 out of 5 stars Worst Film Ever Made?
Reviewed in the United Kingdom on January 8, 2017
Verified Purchase
In fairness this was a tongue in cheek purchase and I wasn't expecting much. My expectations were correct. This film gets 2 stars instead of 1 because in many places it is so bad that it's funny. A friend told me that this was the worst film ever made. I disagree, just. I have seen worse but it must be down there in the bottom 10. If you want to laugh at awful acting and appalling special effects, then it is worth it if, like me, you can pick it up for a couple of quid. If you want to see an enjoyable Christmas classic, stay well clear.
Read more
Report abuse

I loved every minute of it!
Read more
Report abuse

P Godfrey
3.0 out of 5 stars stocking filler
Reviewed in the United Kingdom on February 1, 2015
Verified Purchase
looks a bit on the cheap side. But it will be a stocking filler for next christmas
Read more
Report abuse