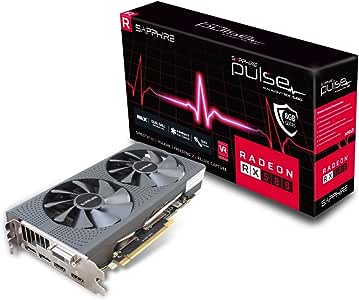 Visit the Sapphire Technology Store
4.6 out of 5 stars 804 ratings
| 3 answered questions
Available from these sellers.

4.6 out of 5 stars
4.6 out of 5
804 global ratings
How are ratings calculated?
To calculate the overall star rating and percentage breakdown by star, we don’t use a simple average. Instead, our system considers things like how recent a review is and if the reviewer bought the item on Amazon. It also analyzes reviews to verify trustworthiness.
Top reviews

I like this graphics card, in fact, I think its great. It replaces an R9 270 which I had been running to exhaustion in a new Ryzen 5 2600X build and not doing the setup real justice. It runs a microscopic amount behind the Nitro+ but overclocking it means that for the price I paid there are happy bunnies hopping all over the HAF X in which it now resides, not that I would allow rabbits anywhere near my computer but if I did they would be happy to hop there.

The software drivers are easily downloaded from AMD which I preferred over using the disc supplied with the card which, by the way, is actually a little smaller than the R9 which is also immensely convenient since it had to use the slot vacated the R9 next to the massive Noctua NH-D15 which, lets face it, wasn't going to move for anyone.

I like a quiet rig and the HAF is very quiet which was a consideration when looking for the upgrade and the RX580 Sapphire fans don’t spin unless under load and you will hear them which is both reassuring or annoying depending on whether you were gaming or doing something video intensive. Either way, a nice piece of kit named ‘Sapphire TRIXX’, is a handy bit of software which gives you control over what this card does and when it does it, including performance boosts. There is other software available but I’m rather drawn to the over-the-top ostentatious look of TRIXX.

For anyone new to the pc building, graphics cards are frequently referred to as plug and play which they are and can be but setting up your graphics card for optimum performance is crucial and the RX580 Sapphire is no exception. Fortunately, the Internet is chock-a-block with instruction and how-to videos on the subject and I would urge you to avail yourself of one of these and sitting quietly in front of a screen for twenty minutes might just save you hours of frustration later. If you’re already familiar with Adrenalin, Wattman, chill etc., you’ll also remember a time when you weren't. Once the RX580 Sapphire is properly configured to unlock all of its ability, the monetary value of this graphics card is undeniable.

With that out of the way, allow me to gush for a moment about the performance of this graphics card. At this price point, its an absolute beast it and pairs perfectly with my Ryzen 5 2600X. Frame rates will soar dramatically without the card ever breaking a sweat and being advertised as a budget card in the gaming cosmos, performance wise, this thing punches so well above its weight that one could be forgiven for thinking that perhaps someone might have put the wrong card in the box, it is that good. So, against cards of similar cost and others which boast an array of flashing leds for some reason, the RX580 Sapphire 8g is the one to beat at this price point and if you’re not convinced, there’s a chap on the tube called Kit Guru who gives an unbiased run through of what to expect against other graphics cards. There are other opinions out there but this guy doesn't impress easily and nor do I which is why its taken me this long to get it.

So, if you’re gaming at 1080p at 60Hz, this is the sweet spot. The RX580 Sapphire stacks up well against a Nvidia RTX 2070, 2080 or 2080Ti if you have the dosh to throw at these and GeForce GTX1060 at this resolution, the GTX1060 fighting hard to keep up and nosing ahead in some games but stepping up to 1440, it taps out by more than a fraction on this Ryzen 5 platform and incidentally, the GTX1060 seems to have a rather high failure rate. For so called budget AMD gamers and taking performance, ease of use on a video display that you’re already using, the RX580 Sapphire cannot be easily beaten in my opinion and if that statement doesn't start a fight I don’t know what will.

Salamander
5.0 out of 5 stars Great card - read if you are buying for a Mac.
Reviewed in the United Kingdom on November 27, 2018
Verified Purchase
This is a great gpu for the money. However if you you plan to get one for a Mac Pro keep in mind that the installation can be tricky and there might be some software issues to resolve.
For putting it in a Mac Pro you will need a 2 x Mini 6 Pin to 8 pin power cable. These are available on EBay and other places (Amazon vendors seem to charge a fortune for what is essentially a very simple cable). They are usually shipped from China so be prepred to wait.
In terms of installation, this is a very deep card, so if you have another PCI card straight above it there is a chance that the fan might grate against it, which obviously is not ok. I removed the card above it as it was not indispensable for me, surely others will find some practical solutions to keep the two cards from touching.
Once in and working fine, I had to do a clean install of Mojave and re install and re authorise all my software - painful but it’s the only thing that worked - some incompatible extensions on my High Sierra system made it so that the computer would not see my monitors excep when booting in safe mode, and even so just one at a time.
I tried all sorts of things for days but nothing except a clean install worked. However this depends on what you have in your system, you might get lucky and get it to work immediately.
Was it worth it? Yes. My eight years old Mac Pro 5,1 now runs Mojave like a charm and the performance boost compared to the original graphic card is obvious. Recommended, but be prepared to put in some work.
Read more
20 people found this helpful
Report abuse

Winston Smith
5.0 out of 5 stars Believe the hype - this is one fantastic graphics card
Reviewed in the United Kingdom on November 23, 2017
Verified Purchase
Believe the hype - this is one fantastic graphics card, and one of the best upgrades that you can make to a 2009 Mac Pro (with modified firmware or newer Mac Pro). Mac compatibility is not claimed for this card and, in fact, if you can't run macOS Sierra then you're out of luck anyway. If you do meet the entry requirements then your ageing Mac will suddenly gain compatibility with Apple's Metal APIs, and the possibility of running X-Plane 11 at high frame rates with high detail. Very impressed.
Read more
22 people found this helpful
Report abuse

Mr. D. Hazel
2.0 out of 5 stars Rather over-priced, and lower quality than its price tag might suggest
Reviewed in the United Kingdom on March 8, 2019
Verified Purchase
It wasn't easy to fit this in my Mac Pro, since the system isn't designed to make it easy to insert the connector into its socket (your arm and part of the chassis get in the way, so you can't see that it is properly located before forcing it into the socket). I then found that the image quality was very poor, when using the Display Port connections, and had to resort to HDMI and DVI instead. It also seems to slow down the system start-up quite considerably, when compared with the original graphics card fitted by Apple. In fact, my only need to replace the old one was that Mojave would not install with the old processor.

Disappointed with this card. I feel its quality does not justify the price, and the Display Port issue was particularly disappointing.
Read more
6 people found this helpful
Report abuse