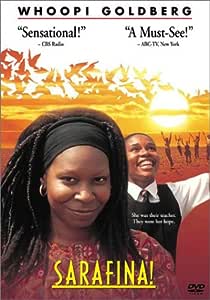 Academy Award(R)-winning star Whoopi Goldberg (Best Supporting Actress -- GHOST) lights up the screen in her latest hit -- the exhilarating and entertaining SARAFINA! In a world where truth is forbidden, an inspiring teacher (Whoopi Goldberg) dares to instill in her students lessons not found in schoolbooks. In doing so, she challenges their freedom and hers. Applauded by critics and audiences everywhere, this upbeat and powerful story promises to stir your emotions and make your spirits soar!

4.6 out of 5 stars
4.6 out of 5
202 global ratings
How are ratings calculated?
To calculate the overall star rating and percentage breakdown by star, we don’t use a simple average. Instead, our system considers things like how recent a review is and if the reviewer bought the item on Amazon. It also analyzes reviews to verify trustworthiness.
Top reviews

Making a movie about this subject (Segregation and Oppression of aboriginal first black nations) has been necessary and important just to remember what had happened.
The famous musical Sarafina! tells the story of the young girl Sarafina, that experienced how the former white government of South Africa tried to destroy the identiity of black people. The black people had been forced to leave their homes, had to live in "townships", a kind of reservation. The school system provided a better education for the white people, the black people were just tought the basic knowledges of reading, writing and calculating.. but nothing about their own history and their own culture.
Sarafinas teacher (played by Whoopy Goldberg) teaches history in her own way .. with humour and in subversive manner. The children love her..

The storm arose, when the government wanted the students to be tought only in English and Afrikaans, which meant they were not only discriminating black people but also were going to steal their idententy by stealing their language.
(same happened to the first nations in America, the Aborigenes in Australia).

The movie starts with a scene of vandalism against the school. But unfotunately the political backgound is not explained. That's the big difference to the musical that was performed on a world wide tour and was also played on broadway: on stage the musical takes its time to explain the protagonists' feelings, their reasons, their situation; the movie doesn't do it unfortunately.. moreover the captation of the beloved teacher becomes the only reason for the student's protest ( and its finally violent riots) and doesn't explain the political background properly.(what a pity!) That's why I gave only four stars.

What you see and feel is the joy of life no matter how hard life becomes. The music is going right through your heart. The original cast with its beautiful voices plays also most of the roles in the movie

S. Ewing
5.0 out of 5 stars A Classic!
Reviewed in the United States on December 1, 2014
Verified Purchase
I purchased this movie because I remembered it from my childhood. I'd walk around singing songs from the movie (with no clue what I was singing) in large part because it was a movie that featured people who looked like me. Watching it as an adult is a little different as I (obviously) now understand the issues in the movie (apartheid) and what all those song lyrics really mean. Though it's a somewhat less joyous watch as a well informed adult, it is nonetheless an amazing film that still feels relevant and important all these years later.
Read more
4 people found this helpful
Helpful
Comment Report abuse

Eyes open
4.0 out of 5 stars Must see
Reviewed in the United States on November 4, 2010
Verified Purchase
This is a must see movie that is powerful and moving about the lives of South African students as a result of apartheid
It is a musical, but the musical bits are not overwhelming and do not take away from the story.
In fact they add great depth and meaning to the story
Although Whoopi Goldberg has top billing in the movie, the other cast members keep up and a couple of them supercede her star performance
If you have to add a movie to your bucket list, this is the one.
And I learned the songs by heart now because I watched so many times :)
Read more
One person found this helpful
Helpful
Comment Report abuse

Joyce Samuels
5.0 out of 5 stars Whoopi's Number one Fan
Reviewed in the United States on March 24, 2014
Verified Purchase
I LOVE!!!!!!! Whoopi, I believe I own all of her movies, from Jumping Jack Flash, burglar, color purple, Colored Girls, rat race, eddie (one of my favorites), the associate (one of my favorite) Santa clause, Made in America, Sister Act I & II, Ghosts of Mississippi, etc, etc, etc You are a genius and I love you on the view. You truly are the reason why I watch it.!! Another great movie! I loved the singing and the story. One day I hope to meet you and let you know what a true inspiration you are!!
Read more
Helpful
Comment Report abuse

Pookie
5.0 out of 5 stars Sarafina
Reviewed in the United States on May 12, 2014
Verified Purchase
I watched this movie back in the 80's and I said that if I ever came across the movie I would purchase for my library. So I was excited when I was able to fine the movie on Amazon. I have watched again and I still love this movie. Thanks Amazon.
Read more
2 people found this helpful
Helpful
Comment Report abuse

Alex M
5.0 out of 5 stars Really a musical about Apartheid?
Reviewed in the United States on July 14, 2013
Verified Purchase
That's what I thought, but having watch it numerous times and using it in my World History class, it really works. Especially with teens. It gave us a starting point for them to understand the situation and the conflict. The movie is great.
Read more
3 people found this helpful
Helpful
Comment Report abuse

Terri C.
5.0 out of 5 stars Great movie!!
Reviewed in the United States on September 6, 2016
Verified Purchase
I show this movie to anyone that visits me !! Love the music, love the message.. Just an awesome movie.. Even my hubby cried while watching it..
Read more
One person found this helpful
Helpful
Comment Report abuse
See all reviews

C. Hutchison
3.0 out of 5 stars "Entertaining"?
Reviewed in the United Kingdom on December 29, 2009
Verified Purchase
I feel uncomfortable having to write a less than complimentary review of what in many ways is a very fine film, the more so knowing that giants of the struggle such as Miriam Makeba and Hugh Masekela contributed significantly to the film. But this must be said: the film fails utterly to capture the daily brutalities of the racist apartheid regime that for nearly 50 years effectively sought to reduce the native peoples of South Africa to nothing more than a slave class of fractured families, characteristically men to the mines, women to domestic service in white households. When the white interrogator refers to "my country" it would have been interesting to have flagged that the indigenous peoples of the country were denied even citizenship. In the South Africa Museum in Cape Town (now the Iziko Museum) the indigenous Khoisan were displayed alongside the baboons (and indeed were routinely rudely addressed as 'baboons'), obscene testimony to the fact that they were regarded as something less than human. This Afrikaner world view, essential in contextualising the action, was not clearly communicated in the film.

Perhaps as disturbing as anything else for me, since it eloquently mirrored much of the miscalculated mood of the film itself, was the blurb on the back of the DVD box: "Amazingly talented Academy Award-winning star Whoopi Goldberg ... lights up the screen in her latest hit--the exhilarating and entertaining Sarafina!" Yes, Whoopi Goldberg is a hugely talented actress, but why choose an American actress who cannot even muster a South African accent when there are so many equally talented black South African actresses who could have played the role? And why "her latest hit"? a "hit", for heaven's sake! and yes, indeed it was, but was that really the point of the film? another "hit" for a foreign actress? "Lights up the screen"? yes, in a way that is surreally far remote from the revolutionary seriousness and sufferings of the black South African teachers I know. What lit up the screen for me was rather the burning of the quisling Sabela. And "exhilarating and entertaining"? yes, sadly I'm afraid it truly was: it oozed with entertainment, obfuscating the brutalised lives to which, in reality, the children were condemned.

So why does all this matter? It matters because, in popular consciousness, the film enters the heterogeneous cannon of documents telling the story of one of the most appalling crimes in human history. Imagine, by way of comparison, an all-singing all-dancing musical on Auschwitz, a top hat and tails tap-dance through the events of 9/11, a jolly sing-along in Guantanamo, a Sabra and Chatila soft shoe shuffle. Is my point coming across? While I acknowledge that as initially (1988) a Broadway musical it may have brought awareness of the evils of apartheid to a New York audience, to deliver on celluloid what is in effect a sanitised African version of The Sound Of Music, just another "hit" for an American actress, is to betray those who suffered throughout the struggles. If you must watch this film, first go visit the Apartheid Museum and Hector Pieterson Museum in Soweto to glean a bit of context.
Read more
21 people found this helpful
Report abuse

ruthiger ruiters
5.0 out of 5 stars Lost memories
Reviewed in the United Kingdom on April 28, 2020
Verified Purchase
There were clips missing from the movie which made it incomplete.
Read more
Report abuse

Nadia
5.0 out of 5 stars Five Stars
Reviewed in the United Kingdom on July 10, 2018
Verified Purchase
One of my favourite movies of all time!
Read more
Report abuse

Keith R. Sauerwald
5.0 out of 5 stars Any movie with Whoopi Goldberg, would have to be good viewing.
Reviewed in the United Kingdom on December 28, 2013
Verified Purchase
And it is . SARAFINA is another of her movies that I am glad I bought. I have never seen a movie with a failure in her acting performance, be it comedy or otherwise. Sarafina is a movie I'm sure you will like....just as I did.
Read more
Report abuse