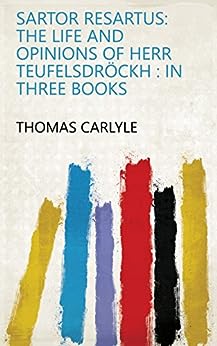 by Thomas Carlyle (Author) Format: Kindle Edition
See all formats and editions
Sorry, there was a problem loading this page. Try again.
This is a reproduction of a classic text optimised for kindle devices. We have endeavoured to create this version as close to the original artefact as possible. Although occasionally there may be certain imperfections with these old texts, we believe they deserve to be made available for future generations to enjoy.
Read more
Previous page
Next page

"The character of his influences is best seen in the fact that many of the men who have least agreement with his opinions are those to whom the reading of Sartor Resartus was an epoch in the history of their minds."  —George Eliot --This text refers to an alternate kindle_edition edition.

Thomas Carlyle, the son of a stonemason, was born in Ecclefechan in Scotland, in 1795. Brought up as a strict Calvinist, he was educated at the village school, Annan Academy and Edinburgh University, where he studied mathematics. After graduating with distinction in 1813 he spent a years studying to join the strictly Calvinist Secessionist Church. His parents had hoped he would become a minister but eventually his religious doubts would not let him continue; he became a teacher at Annan and then at Kirkcaldy.

Carlyle moved to Edinburgh in 1818 where, after an unsuccesful attempt at studying law he became a private tutor and later was commissioned to write several articles for the Edinburgh Encyclopedia and for the Edinburgh Review. Carlyle also began translating German writers such as Goethe and Schiller and writing original work such as The Life of Schiller (1825).

After marrying Jane Baillie Welsh in 1826, Carlyle moved to London where he became a close friend of the philosopher, John Stuart Mill. As well as contributing articles for Mill's Westminster Review, Sartor Resartus appeared in Fraser's Magazine (1833-34). Carlyle also published several books including The French Revolution (1837), On Heroes, Hero Worship and the Heroic in History (1841) and Past and Present (1843).

Carlyle's books and articles inspired social reformers such as John Ruskin, Charles Dickens, John Burns, Tom Mann and William Morris. However, although he had originally held progressive political views, Carlyle became increasingly conservative in the late 1840s. This is reflected in the right-wing, anti-democratic attitudes expressed in his collected essays Latter Day Pamphlets (1850) and his admiration for strong leaders illustrated by his six volume History of Frederick the Great (1858-1865) and The Early Kings of Norway (1875). In the last few years of his life, his writing was confined to letters to The Times. Thomas Carlyle died in 1881.

K A Thompson
5.0 out of 5 stars timeless masterpiece
Reviewed in the United States 🇺🇸 on December 5, 2001
Sir Thomas Carlyle has woven deep meaning into each phrase and footnote of SARTOR RESARTUS. The Philosophy of Clothes remains a living garmet for the laystall of our day. This manuscript bears wisdom for generations that read the struggles of Diogenes Teufelsdrockh or the indulgences of Philip Zaehdarm. It has been described as everything from a brilliant metaphorical adaptation of German idealism, to Calvinism, to a thinly disguised autobiography of the Professor himself. The Tailor Re-tailored deals with a conception of the world described by the Psalmist "As a vesture shalt thou change them, and they shall be changed." Philosophy that trancends time.
Read more
Helpful
Report abuse
See all reviews
Report an issue
Does this item contain inappropriate content?
Report
Do you believe that this item violates a copyright?
Report
Does this item contain quality or formatting issues?
Report