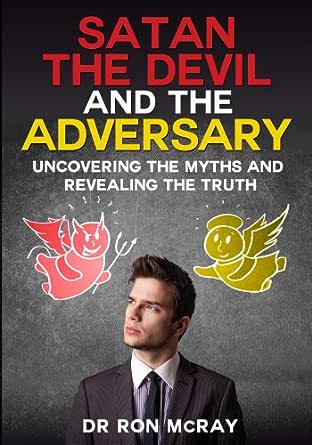 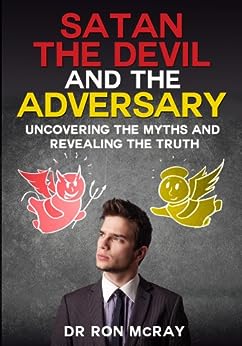 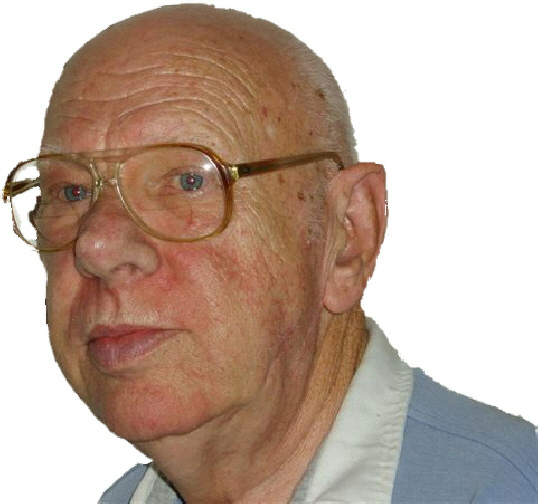 Satan, The Devil and The Adversary Kindle Edition

Dr. Ron McRay holds doctorates in Letters, Philology and Philosophy. After pastoring a church for 35 years he discovered that what he had been taught did not correspond with scripture. His new perspectives brought new understanding to the Bible and Dr. McRay decided that the truth must be spread, even at the cost of losing his pstorate. He has developed a unique approach that reveals obscure and overlooked scriptures in an easy to understand way and brings light to many misunderstood doctrines and prophecies. In his writings, he often uncovers new information, that mysteriously, has been hiding in plain sight, but missed by so many Bible scholars. By using scripture to prove scripture, he imparts a straightforward approach to uncovering the truths of the Bible. Many students of scripture have discovered his insights to be an accurate application of scriptural principles on many subjects, especially eschatology (the study of last things). In 1990, Dr. Ron began offering books and teaching materials that open the Bible's true meaning to believers around the world thru his company, None Left Behind. Many books on a wide variety of Bible topics are available. The Bible does not have to be hard to understand. For further information visit www.EschatologyReview.com. Dr. McRay resides in Texas and can be reached via email at nonelbc@gmail.com --This text refers to the paperback edition.

4.1 out of 5 stars
4.1 out of 5
5 customer ratings
How does Amazon calculate star ratings?
Amazon calculates a product’s star ratings based on a machine learned model instead of a raw data average. The model takes into account factors including the age of a rating, whether the ratings are from verified purchasers, and factors that establish reviewer trustworthiness.
Top reviews

Gary D Nunn
5.0 out of 5 stars Satan, The Devil and The Adversary
Reviewed in the United States on November 25, 2013
Verified Purchase
Ron has done an absolutely amazing work in bringing truth to the forefront, while exposing the myths and legends across different countries, peoples, and centuries. He has done his homework extensively in showing how God's people have been exposed to and even espoused to the same myths as those with whom they associated, whether in captivity or free. False gods and false ideas, especially concerning evil spiritual beings is dealt with in great enough detail for almost anyone (willing to 'hear him out') to see where many false ideas came from.
Christians are the most susceptible to believing and accepting ALL they've been taught -- especially in today's religious world. Dr. Ron McRay's treatment of the subject should give insightful readers truths they've not encountered before -- with an end result of greater hope and a stronger faith in the one and only GOD of the universe. Thank you, Dr. McRay for your time and effort in penning this extraordinary work!
Read more
3 people found this helpful
Helpful
Comment Report abuse

Patti
5.0 out of 5 stars bought book
Reviewed in the United States on November 14, 2013
Verified Purchase
The bible revels and uncovers the truth about how the teaching of the so called fallen angel Satan, came into being. Dr. Ron does a good job of giving scriptures and bible history to show the truth about our misunderstanding of our one and only one true GOD. L Beam
Read more
2 people found this helpful
Helpful
Comment Report abuse

CGREID
5.0 out of 5 stars Uncovering the Myths Surrounding the Adversary
Reviewed in the United States on November 19, 2013
A few years ago, I began to see that there was something amiss about this “god of this world” who has supposedly wreaked so much havoc on the world and even on believers in most of the major religions who have accepted a “creator” God and looked upon Him for understanding and protection.

As Dr Ron points out so eloquently in his new book, this adversary called “Satan” has not been around that long, and has only been seen to any degree in the latter part of the book we Christians call the Bible. Incidentally this “Satan” is far from being a Biblical phenomenon.

The most important aspect of Dr Ron’s book is the concept, not unique to him, but eloquently explained, of Deconstruction. I had not heard of the term until very recently and its revelation, especially in Dr Ron’s book, has removed quite a few of the misunderstandings I had about the Bible.

Dr Ron’s book is all about the “adversary” and the “hows and whys” of its gradual appearance in the Bible. It is also about how Jesus, God, and the words written by the Biblical authors communicate information to the people they originally wrote to, and to us who read the words today.

As a teacher of mathematics and science, I have over the years realized how important it is to talk to one’s audience at a level and with concepts they can understand so as to build on those concepts to greater understanding. For example, did Jesus understand the laws of Physics, quantum mechanics, how the universe came into existence………? Did he know what caused mental illness and disease? Did He believe the Father was in a battle for the “souls” of men with an evil fallen angel called Satan?

Up until a few hundred years ago, the world did not know that it was crucial to look after the food we eat --- to protect ourselves from disease!! Londoners used to toss their garbage and excrement into the streets below. The general population believed that disease came from all kinds of different sources but cleanliness did not seem to be a solution. In the Middle Ages, demonic causality was seen to be the cause of many conditions; some people may have attributed nearly every adverse condition to demons.

As Dr Ron points out so eloquently, Jesus did not try to cram “His understanding” down the throats of those who thought differently. He dealt with people where they were in their understanding of the world and built on that understanding toward His ultimate objectives of preaching the Gospel of the Kingdom of God.

In my youth I wanted to convince others of my beliefs and felt failure when unable to do so. We are all on our own particular path in pursuit of understanding spiritual things ---- all we can do is live our lives and be good examples of love to one another. And to me that is what Dr Ron’s excellent book does. It explains and gives understanding – but it does it all in love and respect for the reader.

“These peoples [in the surrounding nations] had relatively primitive and sometimes erroneous perceptions …that were shared by Israel as a whole and by the biblical authors in particular. And yet it remains that these [false] conceptions … were the indispensable vehicle of religious truth. … for if … God had caused the inspired writers to speak with complete scientific accuracy, the people of Israel would not have understood the saving truth which it was their purpose to convey, any more than it could have grasped their scientific teaching ….” [quote from Page 355, Dr Ron’s book]

Truth Seeker
1.0 out of 5 stars RIPOFF!!!
Reviewed in the United States on January 2, 2014
I liked this book better when it was written in 2007 by Duncan Heaster and called "The Real Devil." The "author" of this book "Satan, The Devil, and The Adversary" should be ashamed. Years of research?....uh, don't think so. Don't believe me?....take a gander at [...] Scroll down and view Mr. Heasters table of contents and compare to Ron McRay's. Better yet, Duncan's site allows you to read read his book online, all of it. Just click on "Look Inside" above and compare to Heaster's text to discover how this "well searched" book is a fraud. This item should be removed from circulation.
Read more
One person found this helpful
Helpful
Comment Report abuse

John Eoff
5.0 out of 5 stars "Satan The Devil and the Adversary"
Reviewed in the United States on September 27, 2013
Anyone who wants to know truth about the identity of "Satan", "The Devil", or whatever "He" is called should read this enlightening book. It is God who is in complete control of this cosmos. There are no challengers. Ron exposes the devil for who he is within this well written book.
John Eoff
Read more
3 people found this helpful
Helpful
Comment Report abuse
See all reviews from the United States