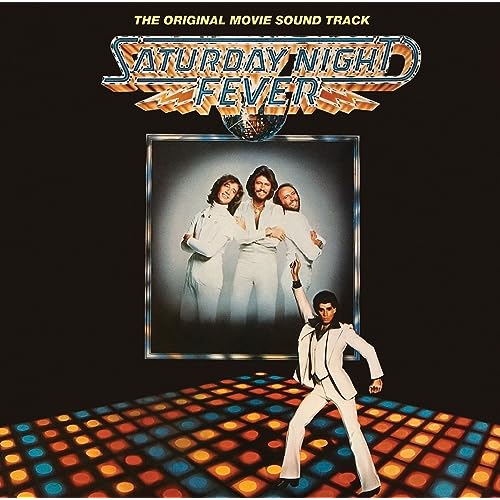 4.7 out of 5 stars
4.7 out of 5
235 global ratings
How are ratings calculated?
To calculate the overall star rating and percentage breakdown by star, we don’t use a simple average. Instead, our system considers things like how recent a review is and if the reviewer bought the item on Amazon. It also analyzes reviews to verify trustworthiness.

D.W.
5.0 out of 5 stars One of the biggest sellers--for a good reason
Reviewed in the United States on December 23, 2016
Verified Purchase
This album is one of the all-time greatest. Aside greatest-hits, I can think of only Michael Jackson's Thriller and Led Zeppelin IV that are even better.

And with good reason. The first 5 tracks, originally the first side of the first disc, were all big hits and great songs. The album also has a few older tracks, notably Jive Talking and You Should Be Dancing, both older Bee Gees hits. And it isn't all Bee Gees. You can find David Shire, Tavares, Kool & the Gang, and The Trammps. This is the record that got disco into the big time.

As for the tracks, they are all solid. Staying Alive opens the record, and it is a great song. Time wise, it is about a second or two shorter than the same song on the Bee Gees double Greatest Hits album. You will not find that 5 minute version of Night Fever--it runs 3'33. Of note, I have never found the 5 minute remix of Night Fever in any format, not as a 12" single, not as a 7" single, not on a remix, not on a Greatest Hits, not on older vinyl copies of Saturday Night Fever, not anywhere. If anything, those other records often chop a second or two off the song.

The other notable time is Disco Inferno by The Trammps. That is the final song on the record, and it runs 10'53. I got the original vinyl Disco Inferno record by The Trammps, and that song was about three seconds longer. Yes, you get the long version here--though it seems about half a second shorter at the end. The tape version, which I also got, had this song chopped about 5 seconds shorter than the CD (which had to be re-mastered to even fit on a single disc).

I can think of just one reason to not give this fine record a chance and see for yourself why it was the biggest soundtrack and one of the biggest all-time records. If you simply cannot stand disco, you probably will hate the album. But, if you never heard disco, of if you have heard mostly the lousy records when everyone and their dog wanted to try disco just before it fizzled, you should give this a fair chance. You might just find out what good disco really sounds like, and you might wonder how some of today's sanitized rubbish even qualifies as "music".

carl korn
5.0 out of 5 stars Timeless Original plus Fab Mix
Reviewed in the United States on April 4, 2021
Verified Purchase
Saturday Night Fever has stood the test of time for over 45 yrs. ALL the songs capture the pulsating disco music of the time. David Shire, arranger of several songs was a genius. He took the classical piece, Night on Bald Mt and transformed it into Night on Disco Mt. His Salsation and Manhattan Skyline are spot on. As for the Beegees, these songs were instant hits when released and they have never left their position of blockbuster hits.
And then there is the bonus of new mixes of Beegees hits by Serban Ghenea. . These mixes are fabulous. The music, solos and harmonies are crystal clear. Everything is enhanced without taking anything away from the original masterpieces. Even though most listeners have a vinyl of Saturday Night Fever , it is well worth buying this issue to hear the extra work by Serban Ghenea.
Read more
Helpful
Report abuse

Anthony G.
5.0 out of 5 stars A UNIQUE SATURDAY NIGHT FEVER LISTENING EXPERIENCE...THANKFULLY!
Reviewed in the United States on January 1, 2011
Verified Purchase
For those wondering if they should purchase this SHM-CD version/edition of this "forever Classic" album from 1977, the answer is a resoundingly...YES! It is annoying as heck that I now own multiple versions of this glorious soundtrack (which others here might also feel...no wonder the album is one of the biggest-selling recordings in music history...I think we should all get rebates for future CDs we purchase in the future), but, my "smell test" for a situation like this is as follows: If I were in a music store (I know...that would have to be about 5 years ago at least, sadly enough), and someone asked me if there was a marked difference in the quality of the sound, I would tell them to go for the SHM-CD format.

You might wonder if there is THAT much of a difference listening to it the first time, but, by the second track, "How Deep Is Your Love", you become very aware of the improvement in the pitch, tone, clarity, AND, most importantly, the fidelity of the BASS and TREBLE. You hear vocals by the BEE GEES that you never even knew were on the mastered recordings from 1977. You hear great spatial differences in the songs: Cymbals are heard that didn't show before...varied percussion is very detectable...placement of the different instruments/vocals have more depth and expansion...many of the songs sound much more orchestral (wait till you hear Walter "Family Guy" Murphy's "A Fifth of Beethoven" in this format...the horns and strings jump out at you! On David Shire's "Salsation", you hear a flute that sounds like it is literally sounding in your ear right next to you, as if you're sitting w/ the band in the studio)than originally thought. I'll put it this way: I've heard this soundtrack on 8-track, Cassette, CD, 2007 Remastered CD, and this 2008 edition is the ULTIMATE ONE. I would say that there is probably a 40-50% improvement in sonic fidelity from the 2007 domestic remaster. This new experiment w/ LCD Sound systems that resulted in this "Super High Material Compact Disc" format changes what versions I wish to own now for any music that I want in the future.

However, one thing that needs to change is the cost of these CDs: It's completely unfair that the most complete version (artwork, LYRICS!!! FINALLY!!!, liner notes, best packaging) is only being produced in Japan thru Universal Japan via the CD Japan.com website. There should be American, domestic editions of these same albums available for more reasonable prices. Why does it seem like Japan takes greater care w/ Western music than we do? Actually, my biggest question regrading this NEW SOUND production is, shouldn't ALL CDs being made now be done in this quality fashion? That should bring the price down by $10 hopefully. The fact that these High Definition CDs play in standard CD players and sound systems should make mass production of these beauties a no-brainer. Hear that, Universal?

Also, I would suggest that anyone looking to buy remastered, new editions of past music should first go to the website mentioned above. The SHM-CDs are probably the best/most complete versions to have. Bonus tracks tend to come with many of the albums. Every person who has purchased one (or many) seems to rave about the quality. My list has already started to grow for the present and the future. Unfortunately, they're being produced in limited supply, so you'll want to pounce on these editions while they still exists. I'm sure that greater demand will create larger supply. Honestly, this should be the "established version" of this album. No others should exist.

Last thing, listening to this version of the album was a distinctive, unique experience. It made the whole work sound rather new and fresh...I was a toddler when this film came out, but I heard this LP in our home, and did see the movie in the theater...I was actually re-experiencing the music. It was a very excellent experience. I hope the same happens to whomever wishes to purchase this perfect double LP capsule of late-1970s Disco/Pop/Rock/Funk.
Read more
8 people found this helpful
Helpful
Report abuse

Tia
5.0 out of 5 stars BUY NOW
Reviewed in the United States on May 30, 2019
Verified Purchase
The media could not be loaded.
Amazing and sounds perfect. Great addition to my collection
Read more
2 people found this helpful
Helpful
Report abuse

C. Papin
5.0 out of 5 stars What Can I Say....
Reviewed in the United States on June 27, 2012
Verified Purchase
I love The Bee Gees and this was one of my favorite movies. The soundtrack was wonderful, and I love how the tracks were remastered, so they are rich and clear and LOUD (just like they should be)

These are my favorites from the Soundtrack. Definitely worth the purchase that's for sure.
Read more
One person found this helpful
Helpful
Report abuse

Pedro Gonzalez
1.0 out of 5 stars No worth it
Reviewed in the United States on May 21, 2019
Verified Purchase
Disc arrived so scratched and in bad conditions. Even the cover is damaged. Very disappointing.
And I waited too long for it.
Read more
One person found this helpful
Helpful
Report abuse
See all reviews

Colin from the UK
5.0 out of 5 stars Still a classic album!
Reviewed in the United Kingdom on July 6, 2019
Verified Purchase
After all these years, the Bee Gees songs on this album are still quite amazing! Fantastic to have this again, and the service was quick, and everything was as described. Very pleased, although I won't be digging out the white suit again...
Read more
Report abuse

Joseph
5.0 out of 5 stars Five Stars
Reviewed in the United Kingdom on December 23, 2017
Verified Purchase
One must have a copy
Read more
Report abuse

Steph in Sunny Kent
5.0 out of 5 stars EVERY MUSIC LOVER NEEDS THIS ALBUM IN THEIR COLLECTION!
Reviewed in the United Kingdom on December 17, 2015
Verified Purchase
A FANTASTIC ALBUM * EXCELLENT QUALITY * SPEEDILY DELIVERED * TERRIFIC PRICE * THANK YOU!
Read more
Report abuse
See all reviews