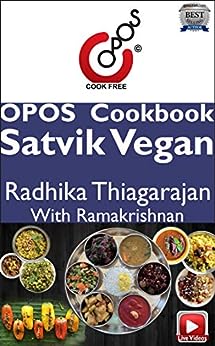 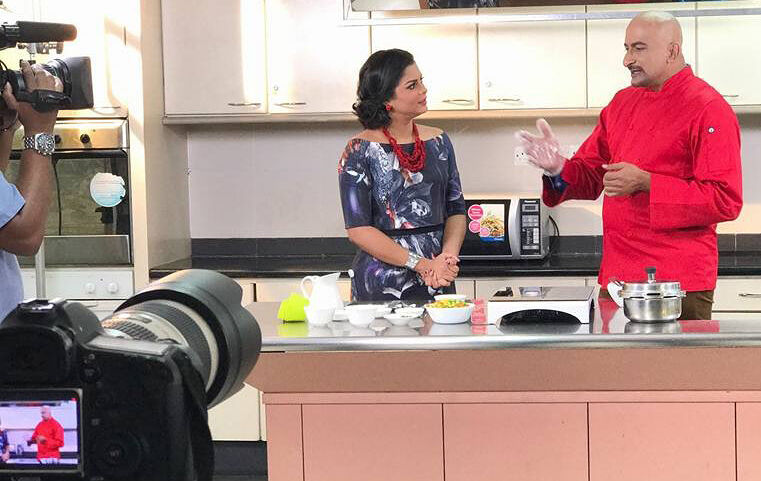 by Radhika Thiagarajan (Author) Format: Kindle Edition
See all formats and editions
Sorry, there was a problem loading this page. Try again.
Radhika Thiagarajan shares her journey to the Satvik lifestyle through this OPOS Cookbook. This book has a wide range of recipes from various cuisines in each of the following categories - Salads, Kanjis, Soups, Grains, Curries, Drinks. Chutneys and Dips and Sweet cravings. Each recipe in this book has a video. She has put together meal plans and a mix and match template to create numerous salads on the fly. She sincerely wishes that these recipes help you more than it did for her and help you pursue a Happy Satvik lifestyle through OPOS
Read more
Previous page
Next page

Ramki, a mechanical Engineer from PSG Tech and an MBA from XLRI Jamshedpur, has always been trying to change the way people live.

In his avatar as a garment manufacturer, he invented acron, a two layered fabric with a synthetic outer layer and cotton inner layer, to change the way people dress. Nothing much happened. He quit.

Then, riding the dotcom wave, he founded Schooling India, making all students a part of the same virtual platform, trying to change the way they learn. He went broke before he could realise his dream.

Then he tried changing the way people cook. He got lucky here but it took him over 15 years before it could start happening!

8 years back he started talking about OPOS in Chennai Food Guide and other food forums. A few listened and most mocked. The discussions almost always resulted in heated exchanges, thanks to his belligerent attitude. He soon got kicked out from all these forums.

He started the OPOS project with Paneer Makhni in 2014, vowing to create the simplest cookbook ever written. With recipes that would work for anyone, anywhere, anytime. The Paneer Makhni recipe derived its punch by using the no water pressure cooking technique on which the group was working on for a couple of years.

A clone of this recipe was posted in 2016 as Butter Chicken for the Instant Pot and went viral.

For the next 4 years, he would spend an insane amount of time trying to get people to cook the OPOS way. Every day he would track a recipe to its roots, uncovering its key building blocks, showing how it has changed over time. This was necessary to demolish bad recipes hiding under the 'traditional &amp; authentic' cover.

Not all were happy. Some mocked, some left, some were blocked and some became serious students. A core group of homemakers were the first converts and were instrumental in making OPOS techniques respectable, getting more people to try them out.

Soon, magic started happening. With Flash cooking, a key milestone was crossed. He realised how traditional recipes can be dramatically improved. He would spend the next year fine tuning core recipes, across cuisines.

Slowly the OPOS structured lessons took shape. When he was convinced these techniques can work flawlessly for everyone, he opened the OPOS School. The initial few months were tough, as not everyone liked the discipline OPOS demanded. Slowly, a disciplined group culture emerged. A core group of volunteers came up and shouldered the burden of interacting with hundreds of members every single day.

Magic started happening again. Marathis, Gujarathis, Bengalis and many others used OPOS to dramatically simplify their own cuisines, making even more people try out OPOS.

He is now on a mission to take OPOS to the world. To cover all cuisines and cultures.

He believes he has been given a great gift and that it is a sin to hold it back from those who need it. He strongly believes it is his duty and destiny to share the OPOS magic with everyone. To ensure blood, sweat or tears have no place in any kitchen. He is confident it will happen in his lifetime!

Rishabh
5.0 out of 5 stars Must try !! Highly recommend
Reviewed in the United States on April 4, 2020
Verified Purchase
Awesome recipes ! Radhika had picked many unique recipes in this book . Every OPOS followers must give this book a try ! I have started with little Millet Pongal from this book and it turned out wonderful . All recipes are given with precise measurements , daily ingredients which are easily available in your kitchen pantry and alternative ingredients as well 🙌Great going Radhi ! My best wishes 👍
Read more
One person found this helpful
Helpful
Report abuse

B. VENNELAGANTI
5.0 out of 5 stars Precise and clear enough to teach hubby and kids
Reviewed in the United States on March 28, 2020
Verified Purchase
I have other opos books. But this one is special for the meal plans and you tube videos. I was waiting to teach my kid as and husband opos and this book made it happen easily. They made Gujarati Khichadi as the first recipe from this book and turned out delicious!
Read more
Helpful
Report abuse

S.K
5.0 out of 5 stars Amazing collection of recipes
Reviewed in the United States on March 22, 2020
I loved the book! The recipes are very exciting and it is very surprising to see a satvik and vegan version of recipes that are very classic like pico de gallo. I am really looking forward to trying them out. When all of this is OPOS it makes it all the more easy. Kudos to the author !
Read more
Helpful
Report abuse

mathk
5.0 out of 5 stars Collection of healthy vegan recipes
Reviewed in the United States on March 27, 2020
I like this book very much .Author has described each and every recipe with more details.Its easy to follow.Iam yet try more recipes from this book.
Read more
Helpful
Report abuse

Hema Sadasivan
5.0 out of 5 stars Awesome recipes !!!!
Reviewed in the United States on March 22, 2020
The author is an awesome cook.. I have been following her recipes .. she’s very detailed and clear in her instructions.. excited to order this book
Read more
Helpful
Report abuse

Rathi
5.0 out of 5 stars A must have Satvik book!!
Reviewed in the United States on April 5, 2020
Wonderful book to start on Satvik food journey. Very detailed instructions and everyday ingredients that can be found in pantry. The meal plan makes the mornings very stress free ☺️. Way to go Radhika!!!
Read more
Helpful
Report abuse
See all reviews

Amazon Customer
3.0 out of 5 stars Great collection of satvik vegan recipes for OPOS!
Reviewed in Australia on August 2, 2020
Verified Purchase
But the minus is that this book does have non-vegetarian (meat based) recipes too. The book can be based on a template - but the template is just that - a template. It has to be edited based on what your book is.

Would have been great to have answers to the popular questions satvik diet followers have about OPOS:
1. Substitute for the onion buffer that is part of all OPOS recipes
Most non-satvik recipes can be converted to satvik - in non-traditional cooking. But not so for OPOS. So, I eagerly looked forward to this book. But this question is not answered. Given the level of effort and experimentation that went into standardizing OPOS, we cannot just substitute whatever we want...
2. Substitues for non-satvik staple like ginger-garlic paste.
Read more
Report abuse

Savithiri
5.0 out of 5 stars Healthy & tasty recipes!
Reviewed in India on February 8, 2021
Verified Purchase
The Satvik Vegan OPOS Cookbook is loaded with healthy recipes that help us cook light & tasty food within minutes. There are a wide variety of recipes that range from salads to meals to drinks to sweets so that one can satisfy their food cravings at any time of the day. Radhika also offers tips to perfect the recipes and meal plans to prepare healthy meals with simple ingredients. Above all this comes with the OPOS promise of preparing healthy, vibrant & tasty food within minutes. Radhika also inspires us by sharing her journey with OPOS and how OPOS cooking helps us save time that can be dedicated towards doing what we love. If you're someone who wants to cook fast and also eat tasty & healthy food then you must definitely try these recipes.
Read more
Report abuse

Nivedhitha
5.0 out of 5 stars A must-buy
Reviewed in India on March 25, 2020
Verified Purchase
The book is very well written in terms of the number of recipes, the format, links provided, meal plan ideas, a very comprehensive and thought through! A must buy for vegans and non-vegans alike.
Read more
Report abuse
See all reviews