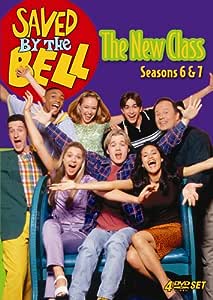 As graduation approaches, the Bayside High gang faces many challenges and fun-filled adventures in the final two seasons of this well-loved series! Tony, the quarterback from arch rival Valley High, transfers to Bayside and joins Maria, Nicky, Katie, Eric and Liz in these 26 hilarious episodes. Meanwhile, one of TV's nuttiest odd couples -- Mr. Belding and Screech -- end up working together in an after-school job. As the gang prepares to enter a new phase in their lives, many surprises are in store!

Servo
4.0 out of 5 stars The New Class - Season 6 & 7
Reviewed in the United States on February 3, 2011
Verified Purchase
Actually Season 6 split into two separate seasons (per NBC following their cancellation of the series), Saved By The Bell: The New Class - Season 6 & 7 brings the franchise to a close as it welcomes Tom Wade Huntington to the cast. With Ryan "3000 miles away on a scholarship to the best private school in the country", Huntington fills the void as Tony Dillon, the newest member of Bayside's football team who unfortunately falls victim to "Maria's Revenge". By episode's end, they reconcile and soon Tony picks up the gang's rhythm for Bayside hijinks before they all embark on new challenges in the finale "The Bell Tolls". Cue the graduation song and say farewell to Maria, Eric, Katie, Nicky, Liz, Tony, Screech, and Mr. Belding with the show's final 26 episodes.

Guest stars include: NBA great Kareem Abdul-Jabar in "Maria's Revenge"; Jennifer Hale (Spider-Man: The Animated Series) as Sue in "Win, Lose or Cheat"; Barry Livingston (My Three Sons) as Mr. Green in "Guess Who's Running the Max"; Nick Spano (Even Stevens) as Travis Wilson in "Mind Games; Kim Miyori (The Punisher, St. Elsewhere) as Ms. Wells in "Free for All"; Taraji Henson (Hustle & Flow, Boston Legal) as Girl in "Loser"; Sam Jones III (Smallville) as Jeff in "Show Me the Money"; Merrin Dungey (Alias, King of Queens) as Coach Williams in "Prescription for Trouble"; Diane Delano (Popular) as Officer Barry in "The Captain and Maria" and "Don't Follow the Leader". Look for a cameo from series assistant to the producers Gilbert Lopez as the chef in "Cigar Wars".

Saved By The Bell: The New Class - Seasons 6 & 7 is a 4-disc (single-sided) set featuring all 26 episodes aired between 1998-2000 in Full-Frame (1.33:1) video and Dolby Digital 2.0 mono audio. The audio is fine and consistent with the previous set while the video quality (which could be better) is apparently the best that Image Entertainment can muster. The discs are housed in a 4-disc black amaray case which perfectly holds the discs in place without scratching and without strain to remove. Here are the episodes (as listed in the menus) and how the discs will be configured.

Ken Haney
5.0 out of 5 stars Saved By the Bell, The New Class, Almost as good as old class
Reviewed in the United States on August 25, 2009
Verified Purchase
Saved by the Bell - The New Class: Season 5 is a great start of a new series with new classmates. All the savedby the bell series are and were great an kids of all ages, including Adults still love Saved By The Bell SERIES! Season 6 & 7. Can't go wrong with any Saved By The BeLL Tv Series. Great for the whole family like mine!
Read more
One person found this helpful
Helpful
Report abuse

Hussein Maloof Flores
4.0 out of 5 stars The Last Season...
Reviewed in the United States on July 30, 2006
Verified Purchase
It's good to have watched this show at least... for me, it's the best of the "New Class " series... In the middle of the laughs, there's a lot of problems that high school students face everyday, like drugs, cigars, first loves, breakups, jokes, deceptions... and friendships...

... and if you followed this series since the original cast been in the show, then maybe you'll cry in the last chapter of the show...
Read more
One person found this helpful
Helpful
Report abuse

Max
5.0 out of 5 stars love it
Reviewed in the United States on June 16, 2014
Verified Purchase
it's saved by the bell the new class, love the show then and love it still, just a good blast from the past watching it
Read more
Helpful
Report abuse

Larry G.
5.0 out of 5 stars Five Stars
Reviewed in the United States on December 27, 2014
Verified Purchase
I got all the saved by the bell I love the shows.
Read more
Helpful
Report abuse

Lucky rican
4.0 out of 5 stars new characters
Reviewed in the United States on January 19, 2014
Verified Purchase
If you enjoyed the original series still to this day them you will enjoy this as well its full of the same stuff
Read more
Helpful
Report abuse
See all reviews