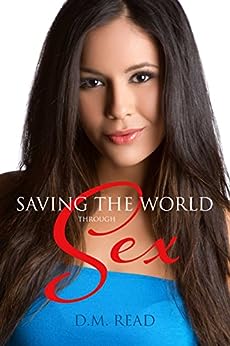 BEA2310
5.0 out of 5 stars So Much Fun to Read
Reviewed in the United States on November 28, 2017
Verified Purchase
Saving the World Through Sex was a joy to read. The story is timely, it has a sense of humor (I’m still laughing about the particular placement of a figgy pudding) and there is a good bit of erotica to boot. Following Carmela’s journey to becoming a member of the International Tarts Society was interesting as well as entertaining. Bonus - I know very little about goddess worship, so I actually got a bit of an education.

The book makes for a quick read as it’s nearly impossible to put down once you get started. I so wish that the Tarts were real, the world needs them right now! I hope there are more Tart stories to come, I long to see where they go and how they save the world next.
Read more
One person found this helpful
Helpful
Report abuse

Happy Carma
5.0 out of 5 stars A satirical breath of fresh air by DM Read
Reviewed in the United States on January 4, 2018
Verified Purchase
This book was a welcomed escape from the political juggernaut that is the trump administration.

DM Read imagined an alternative reality in which the 'Tarts' (all named after fruit, except Caramel) use their womanly charm, sexual skill, and a little magic to change the political course of the respective countries they represent…each being assigned that country’s leader. Caramel has the toughest job, as she is assigned to egomaniac womanizer Eric Tayshun, President of the Deeply Divided States of Vespuccia. The goal is for Caramel to prevent President Tayshun from starting a world war with a country in Asia, led by a demagogue crack pot not unlike Tayshun. Caramel quickly lures the lustful Tayshun in like a bee to a rose. You’ll have to read the book to find out what happens, but Read provides many laugh-out-loud moments as she develops the plot and its kookie cast of characters. Read gave such detailed descriptions of each of the Tarts, that I felt as if I knew them personally. I learned of their background, make-up, clothing, personality, and the ancient Goddess rituals used in the Tarty Techniques. The most important Technique, #23, was so intense that it changed the course of world history… So grab a glass of wine, cozy-up on the couch, and prepare to be entertained by The International Tarts Society!
Read more
One person found this helpful
Helpful
Report abuse

Elizabeth Cunningham
5.0 out of 5 stars Sex Magic meets Global Crisis
Reviewed in the United States on November 14, 2017
Verified Purchase
When sex magic meets global crisis get ready for a wild and hilarious ride. The members of the International Tarts Society have taken sweet names, but they are also tart, savvy and in touch with the ancient and timeless goddesses of their sensual arts. And they are on a mission! Most of us have sexual fantasies, but Saving the World through Sex is also a delicious political fantasy. Indulge yourself in this delightful romp that gives happy ending a whole new meaning.
Read more
3 people found this helpful
Helpful
Report abuse

Damit Senanayake
5.0 out of 5 stars Magic, sex, satire... this book has it all!
Reviewed in the United States on November 28, 2017
Verified Purchase
This book makes no apologies about its subject matter. It's about sex, and a group of women known as the International Tarts Society (I.T.S.) who use their feminine charms to keep the world safe for everyone.

Follow the escapades of their newest member, Caramel Tart, and her interactions with Peach Tart and the other members of the I.T.S. as well as the political environment she finds herself abruptly thrust into. Stay for the elaborate descriptions of the stunning clothes, food, fashion accessories and ancient rituals Caramel undertakes to complete her mission. And just when you think it's all over... keep reading for a completely unexpected finale!

This book has lots of little nuggets of delight for everyone, from old religions to the arts of seduction to 1920s big band music. I particularly appreciated the attention to detail the author showed in describing the various ancient rituals and goddesses who are involved in the story, as that is an area of interest of mine. The 1920s flapperettes and accompanying big band were the cherry on top.

Overall a great book and I thoroughly enjoyed every moment of it!
Read more
One person found this helpful
Helpful
Report abuse

Jean Neideigh
5.0 out of 5 stars Hilarity, Humanity, and Healthy Dollops of Sex
Reviewed in the United States on December 16, 2017
Last evening, I curled up with my kindle and read “Saving The World Through Sex” by D. M. Read. It is the first novella-length story featuring Ms. Read’s understatedly notorious “International Tarts Society,” a team of beautiful, young, highly focused and extensively trained women who seek to disarm geopolitical danger by means of erotic diversion.
The novella is a skillfully constructed political satire. Familiar public figures, situations and international crises are given the “through the looking glass” treatment—leavened with no small amounts of humor and sexuality—as we follow the critical mission of newly recruited Carmela Sandoval (aka “Caramel Tart”) to save the planet from the ego-driven baser instincts of one President Eric Tayshun by diverting his attention to his at-least-as-ego-driven-and-base sexual instincts. Hilarity, brinkspersonship and all manner of “left (almost) to the imagination” gonadal gavotting ensue.
Please get it for your Kindle or other reader at Amazon. Or Google “D. M. Read” and take it from there. Ms. Read is doing delightful things with sexy but not smutty female-centered fiction that I’ve seen nowhere else; she deserves your attention.
Meanwhile, I’m picturing Tarty Technique Number Twenty-Three in my mind…
Read more
Helpful
Report abuse
See all reviews
Back to top
Get to Know Us
Make Money with Us
Amazon Payment Products
Let Us Help You
EnglishChoose a language for shopping. United StatesChoose a country/region for shopping.
© 1996-2021, Amazon.com, Inc. or its affiliates