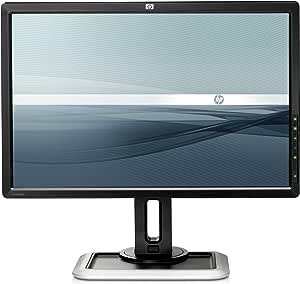 No warranty and or product support is provided by me.

CFortC
5.0 out of 5 stars Professional monitor
Reviewed in the United States on April 18, 2020
Verified Purchase
I've had several of these over the years. The one just purchased replaces my original from 2010 which finally went out of commission due to the failure of the internal Agilent Color Sensor (essentially impossible to repair these days). That said, I am completely spoiled by these monitors and could not face adapting to a lesser-specification monitor.

Previous ownership also means that I already have the HP Calibration Solution (hardware sensor and calibration program) required to periodically calibrate this monitor. It's a completely proprietary solution since the calibration table is uploaded to the monitor (via USB) at the completion of calibration cycle and resides in the monitor, hardware-style, rather than as a software lookup table residing in the attached PC.

Why go to all this trouble? It's all there on the screen: from those pixels to your discerning eyes.

AMC
5.0 out of 5 stars Excellent Product
Reviewed in the United States on August 20, 2009
Verified Purchase
This is by far the best computer monitor out there currently that can also double as just a monitor for all your video/photo/animation needs. Is it the best in all those categories? Maybe...maybe not. For me, for now....it definitely is. It all depends on how the end user configures the monitor; as it seems endlessly configurable!! The presets help if you don't want to spend time tweaking it to your perfection. And if you do wish to tweak it, a much recommended accessory is the calibration kit designed especially for this monitor (HP Dreamcolor Advanced Profiling Solution KZ300AA).

This monitor does cost [...], but...in my opinion...you definitely get what you pay for and won't be disappointed.

Very well built (yes, built / assembled in China). Great monitor stand; very easy to move up, down, swivel and yes....with the (Windows only) software...you can rotate it to Portrait mode. You'll need a sturdy desk to support this monitor. It weighs a bit more than other 24" monitors.

Read the online PDF manuals before you buy to understand how this monitor works and what it is capable (and not capable) of.

I have it connected to a 2009 MacPro Oct-core; w/the ATI4870HD card; connected via the Mini-DisplayPort. (Note on that...if you do run it with a computer that has Mini-DisplayPort, you'll need to purchase a Mini-DP to Fullsize DP cable). You can try to find it here on Amazon or at Circuit Assembly is where I found mine. Works great; no problems. I bounce back and forth between Mac OSX (10.6.1) and (via Bootcamp of course) Windows 7 Ultimate 64 (beta of course) all with no problems. I even have a second monitor hooked up, via the DVI port in the ATI card, in conjunction with this DreamColor monitor...and it works flawlessly. This is where you will REALLY notice the quality difference.

The monitor also has HDMI, DVI, VGA, Component, Composite, S-Video and USB input ports. And yes, they even include the cables!! (But not the Mini-DP cable I mentioned above.)

Hey, if it's good enough for the crew at DreamWorks...

A definite BUY recommendation...that is, if you can afford it.
Read more
13 people found this helpful
Helpful
Comment Report abuse

Amazon Customer
5.0 out of 5 stars Notes on my Dreamcolor lp2480zx purchase
Reviewed in the United States on October 3, 2014
Verified Purchase
A splendid color trustworthy monitor when paired with the Dreamcolor Color Calibration Solution (B1F63AA) (200-350$). I could not be happier with the price (700-800$) and quality. I did consider the 4K HP alternative, but the price was double, and for most of my purposes, unneeded as of yet.
I really appreciated the variety of inputs this monitor has: HDMI, Display Port, DVI-D, DVI--I, component, s-video.. Very useful. Unfortunately the picture in picture option only works for analog signals. Would love to take advantage of it otherwise.

The brightness of this monitor at factory settings for some of the color spaces is blinding, and far too bright for extended use... but using the calibration solution I was able to adjust the brightness and maintain color accuracy, using unneeded programmed color spaces as different levels of brightness for the desired color space.

The monitor stays much cooler than I thought it would after reading reviews on custom cooling solutions, and I see no need as long as the built-in fan remains functional.

There are at least two model numbers for this monitor and although Sbuy LP2480ZX 24IN LCD Monitor, with two different prices. The A4, as low as 700$, and the A8 for around 1500$. I ordered the monitor for 700$, expecting the advertised A8 and received the A4. This troubled and worried me intensely, but after much searching the net for differences or defects, and looking to HP for specs. The only answer I found as that one line was made for the UK and the other for US. I could not confirm this, but not wanting to spend an extra 700$, I elected to keep and open the monitor. Thankfully I have had zero issues after getting it calibrated, and am loving the high quality monitor so far. (Monitor manufactured in 2013.)

During installation I did have some worrisome situations such as: The base feels sturdy without the monitor attached yet has a fragile plastic feel, making it difficult to swivel, without be concerned about applying too much force. Also the attachment piece on the stand had only 3 of 4 screws, and would not stay pushed down like the picture shows for installation, making installation appear to need an awkward 45 degree angle. But all off these woes were dispelled when I easily attached the monitor and it adjusted flawlessly. However, if you do push the monitor base all the way until it locks like the picture, you will have to use considerable force to press the button that unlocks it. The plastic yet sturdy feel is contradictory, but it works fine in the end.

Also note some input signals cannot use the Dreamcolor Engine, such as interlaced video and digital YUV. The monitor still displays them, just not using the highly accurate engine. This can be worked around with a conversion device, but I did not require this. It still looks wonderful for viewing purposes, with some adjustment to monitor saturation.

The monitor software also has some nice software features such as window spaces zones, when windows are dragged into the customizable desktop spaces the window resizes to that designated area; also auto - pivot is invaluable, as long as it is on; because yes turning the monitor 90 degrees for portrait mode looks great. But be wary about keeping the cables securely plugged in when turning it. I had a scare when I first got the monitor and heard a pop and the monitor cut off. Turns out the power came loose when turning it and cables have more resistance on the desks edge! All was well though.

So how is the picture? Once again let me say it is splendid. My previous hp monitor was a 700$ f2105 which has been working for close to ten years now and looks just as good as it did. Now finally I have a worthy replacement for all my needs. Whether it be photoshop accuracy, gaming with incredible full color native color, watching blu-rays at the desktop, or doing work. All cases look superior to even my previously desired apple thunderbolt monitor (well not as shiny...)
Oh and I will mention the 10 bit color. Unfortunately to use 10 bit color in Windows with Nvidia, you need a workstation graphics card like a Quadro. This, even though Nvidia consumer cards support it already using official Linux drivers... proportitly. Still with the monitors native Full color space I can enjoy the dream engine's 10 bit color interpolation.

All in all, this monitor is a real bargain for those who have professional need, or crave the next level up without paying over 1k.
Highly recommended. Will keep the review updated for any developments. Oh, and don't forget to use a screensaver if you are getting up and leaving for lengths of time. It does say monitor burn-in can occur if left alone... I have mine set to 5 mins and blank screen.
Read more
6 people found this helpful
Helpful
Comment Report abuse
See all reviews
Pages with related products. See and discover other items: Computer Monitors