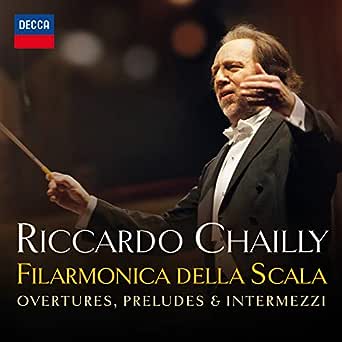 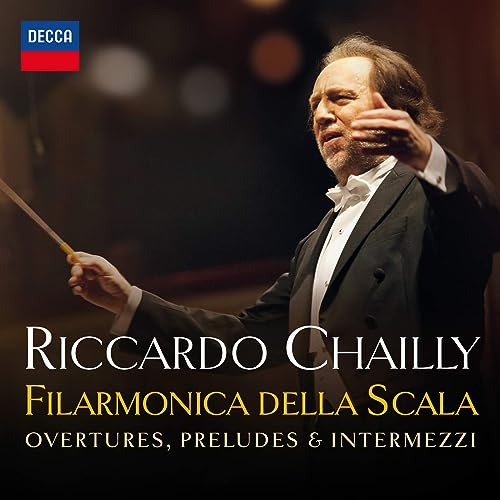 Filarmonica Della Scala and Riccardo Chailly
4.8 out of 5 stars 9 ratings
See all 2 formats and editions Hide other formats and editions
Buy the CD album for $16.98 and get the MP3 version for FREE.&nbspCD album ships from and sold by Amazon.com. Terms and Conditions. Does not apply to gift orders. Complete your purchase of the CD album to save the MP3 version to your Music Library.

Richard R. DiPuma
5.0 out of 5 stars Decca sound is everything that l other labels/studios wish they have.
Reviewed in the United States on June 3, 2017
Verified Purchase
Riccardo Chailly conducting La Scala Philharmonic is outstanding.
Read more
One person found this helpful
Helpful
Comment Report abuse

STEWART CROWE
5.0 out of 5 stars A sparking collection of the rare and the familiar brilliantly played and recorded-a delight from beginning to end!
Reviewed in the United Kingdom on March 29, 2017
Verified Purchase
When I reviewed the recording of Mahler 9 by this orchestra under Daniel Barenboim, I was taken to task-abused actually-for having listed the orchestra’s pedigree as La Scala Philharmonic and being mistaken, as this was a completely different orchestra.

I got tired of the tirade from G.Luca but as this review involves the Filarmonica Della Scala once again, let me establish for the avoidance of doubt that this IS the orchestra of La Scala Milan which in 1982 also formed itself into the self-governing orchestra of above title in order to promote and perform its own orchestral concerts separate from those sponsored by La Scala itself-much like the relationship between the Vienna State Opera and Philharmonic.

The orchestra with which the offensive “G.Luca” confused it is the Giuseppe Verdi Orchestra of Milan co-founded by Ricardo Chailly, a very fine orchestra indeed but not involved in either recording!
So- to the recording in hand (at last! I hear you groan).

Chailly is very good at these pot pourri confections, and an earlier collection of Puccini rarities is a firm favourite.
The theme here is works premiered at La Scala Milan and includes some firm favourites as well as some real rarities. All the works are brief, the Dance of the Hours from La Giaconda being the most substantial and one of the few to be regularly performed, though the Bellini, Catalani, Puccini and Boito numbers are certainly familiar.

They are all given lively performances, full of energy and drive and lush string tone in the more lyrical passages. The years under Barenboim as Music Director of La Scala have engendered a more rounded Germanic character to this orchestra, and this might be a source of regret-the wonderful brass band Italianate trumpets are a thing of the past it seems!

The early Verdi, the Rossini and Donizetti numbers all sound familiar even if they are not-they are very much “ in character” for those composers.
Giordano’s “Siberia” Overture based on the Song of the Volga Boatman is performed occasionally, as are the items from Edgar and Butterfly, but apart from the Ponchielli it is the Intermezzo form Pagliacci that is most often heard. All are given first rate idiomatic performances wonderfully played.

Most remarkable however is the Prelude to Leoncavallo’s “I Medici”-a work I have never heard. The offstage horn and trumpet calls are reminiscent of the 1950’s Robin Hood TV series mixed with Tannhauser and the Flying Dutchman! It is splendid, as is the darker more ruminative Act3 Prelude.
These are a revelation-I am now really curious to hear what the whole work sounds like-it certainly augurs well from these extracts.

The recording is excellent-rich and detailed, a typical Decca spectacular and there is nothing to detract from the enjoyment therein. Slight stuff maybe, but never less than fascinating and enjoyable.
Totally recommended to those for whom this kind of collection has appeal and worth the cost to hear the Medici extracts alone! 5 Stars. Stewart Crowe.