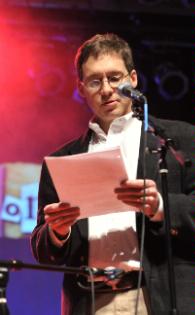 Stanley Hauerwas
— author of Resident Aliens
“A hopeful book that helps us know how better to hope. That may seem odd, but Lee Camp rightly helps us see that there are forms of hope that are perverse. He does this while providing an account of our current life in America that makes Christians betray our basic convictions as Christians. This is a subtle book that should be widely read.”

Shane Claiborne
— author, activist, and co-founder of Red Letter Christians
“I love Lee Camp. I try to read everything he writes, and I agree with most of it! His newest book is a manifesto for the Church, in a time where the American church is in total disarray. Lee reminds us that our ultimate allegiance is not to a donkey or to an elephant, but to the Lamb. His invitation is not to go ‘Right’ or ‘Left,’ but to go deeper. And much of our current moral crisis could simply be averted if Christians were more committed to Jesus and to the poor than to their political ideology.”

Miroslav Volf
— author of Flourishing: Why We Need Religion in a Globalized World
“With characteristic intelligence, humor, and grace, Lee Camp argues that the American church today has earned itself the curious distinction of having largely ‘destroyed its own witness.’ But Lee is not just a prophet of doom. He proposes an alternative. It may be a scandalous one, to be sure, but it is a courageously hopeful one as well.”

Ashley Cleveland
— Grammy-winning gospel singer, author of Little Black Sheep
“It’s impossible for me to read Scandalous Witness without a growing awareness of the ways I’ve conflated the Gospel with nationalism. I love my country, but I belong to Jesus, and that belonging frees me and calls me to share in the costly suffering love that takes precedence over all else. Lee has outlined clearly and beautifully all the ways, large and small, we Christians abandon our first love and turn to national interest—which in the end is another form of self-interest.”

Randall Balmer
—Dartmouth College
“With the savvy of a scholar, the keen eye of an observer, and the passion of a prophet, Lee Camp has produced a document for our times. The author fearlessly points out the inconsistencies and hypocrisies on both sides of the political spectrum, reminds us that the United States was never a Christian nation, and points out the twin dangers of a privatized faith and too close an alliance between religion and the state. This is an important and timely book for any Christian seeking to navigate the dark waters of our present age.”

Scot McKnight
— author of The Jesus Creed
“The only thing of interest to me as a theologian of the church when it comes to politics is something that dissects and decimates the current Christian alliances with American political parties. Someone once said the mainline church lost its grip among American mainline Christians because it was no longer distinguishable from The New York Times, and someone now needs to warn conservative evangelicals that it is losing its grip on its people because it is no longer distinguishable from Fox News. If you would like an alternative, read this tart, sassy and, yes, strategic book that presses us to see the church as a politic. Agree or not, he's an equal opportunity critic.”

Greg Boyd
— author of The Myth of a Christian Nation
“In this well-written and concisely argued work, Lee Camp masterfully traces how the church in America has to a large degree lost its all-important ‘scandalous witness’ while suggesting ways we can begin to recover it. In the process, Camp provides us with a remarkably clear, carefully nuanced, and undeniably compelling defense of a biblical understanding of the kingdom of God. And precisely because his articulation is so clear, Camp brilliantly exposes just how wide the gap is between the biblical understanding of the kingdom, on the one hand, and what currently passes as ‘the Christian faith’ in America, on the other. Of course, even Anabaptist readers such as myself may disagree with Lee at certain points, but I can hardly imagine anyone who takes Camp’s arguments to heart putting this book down unchanged. If I had my druthers, I would make this book required reading for all American Christians.”

Walter Brueggemann
— Columbia Theological Seminary
“With his emancipated evangelical witness, Lee Camp boldly exposits the reality of a Gospel faith that is deeply political. This is not a tradition of other-worldly, privatized spirituality. Nor is it an advocacy for the right or the left. Rather, this book is a summons to active public engagement in the political economy for the sake of gospel promises. Camp offers a vigorous critique of nationalism and the ways in which US Christians have been seduced by so-called alignment of faith and nation. Beyond that, this book issues a compelling invitation of gospel hope as the engine for generative public engagement. This is a welcome book, one that is sure to evoke fresh thinking and fresh action.”

Richard Beck
— author of Stranger God and Trains, Jesus, and Murder: The Gospel According to Johnny Cash
“Bold, urgent, uncompromising, courageous, and prophetic. Every page of Scandalous Witness surprises, shocks, and subverts. And all of it is absolutely necessary. American Christianity has lost its way, and Lee Camp has written the political manifesto the church needs ‘for such a time as this.’”

David Gushee
— Mercer University, past president of the American Academy of Religion
“Lee Camp’s Scandalous Witness is balm for the politically weary Christian’s soul. In a series of astringent commentaries, Camp impales pretty much every Christian sacred cow, whether right or left politically. Operating from a robust eschatological-ecclesial vision, Camp diagnoses much of what has gone wrong with US Christian politics from within his disciplined theological outlook and offers a contrarian statement that is up to the minute in its relevance. I highly recommend this brief but extremely helpful book.”

Drew Holcomb
— Magnolia Records recording artist
“With a scholar’s eye and a storyteller’s knack for narrative, Lee Camp exposes the current inability of American Christianity to bear witness to the gospel. We are asking the wrong questions, taking the wrong turns and pledging the wrong loyalties. Both parts contrarian and constructionist, Camp finds himself in the family tree of St. Paul, Augustine, Hauerwas, Davison Hunter, and others, challenging those who call themselves Christians to rearrange our bastardized version of the faith towards a more prophetic, historical and theologically courageous imagination.”

Lee C. Camp is professor of Theology & Ethics at Lipscomb University in Nashville. He is the author of Mere Discipleship: Radical Christianity in a Rebellious World and Who Is My Enemy: Questions American Christians Must Face About Islam, and Themselves. Lee finds great joy in teaching college and seminary students, flying sailplanes, and hosting Tokens Show, the world's only long-running theological variety show, which you can find online at www.TokensShow.com.