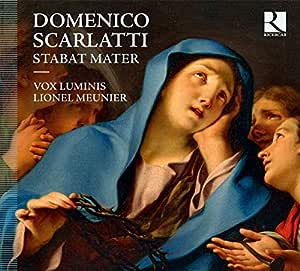 VOX LUMINIS 10 years already! 10 years already although the unbelievable adventure on which Vox Luminis and Ricercar are engaged began a little later. To celebrate this birthday, Ricercar presents a new edition of the first recording of Vox Luminis (RIC 258). This year Vox Luminus will bring out a double CD containing the complete motets by the ancestors of Johann Sebastian Bach; and their major release for 2015: Carissimis Jephthe. Three cheers for Vox Luminis!

George Peabody
5.0 out of 5 stars a voice teacher and early music fan
Reviewed in the United States on December 1, 2012
Verified Purchase
I DON'T SING BECAUSE I'M HAPPY; I'M HAPPY BECAUSE I SING!

As I listened to this recording for the first time the above quotation by William James came into my head and the following commendation of this performance seemed to be reinforced by GRAMOPHONE.

GRAMOPHONE (4/2008): "Sheer joy in music-making is as evident here as the sense of piety required by what are, after all, holy works. Yet it is difficult to begrudge Vox Luminis the feeling of joy at the astonishing sounds they are able to produce. The spirit of devotion is very much alive here too, in an album that pays equal attention to the holy and the heady."

Although many people are certainly aware of Domeninco Scarlatti's (1685-1757) keyboard sonatas, many are yet to be aware of his 15 operas and the dozens of arias, duets and cantatas, or of his oratorios and various other sacred works. The four sacred vocal compositions included on this disc are all worthy of notice. But in my mind it is the 'Stabat Mater' that is his greatest vocal production. So I will focus on that; but I hasten to add that I thoroughly enjoyed every note of music on this excellent recording.

In his impressive 'Stabat Mater' he was writing as a renovater of tradition. In ten parts it was composed in Rome around 1715 in a contrapuntal style which, on the surface seems archaic. Written for four sopranos, two altos, two tenors, two basses, and organ continuo (specified by the composer), who did not wish to impair the transparent texture of the polyphony with an obtrusive instrumental accompaniment and this is observed in this presentation. The 'Stabat Mater' is strikingly lyrical and mature in manner, and also highly melodic, astonishingly modern and has harmony "whose 'richness' and beauty remind one of Mozart's last religious compositions". (Jurgen Jurgens).

The ten singers in this work(stabat mater) are indeed individual soloists that come together at various places resulting in some highly enjoyable vocal combinations. Overall unlike some of the other 18th century 'Stabat Mater' composers, Scarlatti's vision of the piece is darker and more meditative, more bound to the text. The performance on the part of all concerned with this disc is beyond reproach, but it is to the singers that I give adulation for they were magnificent in their ability to excite, entertain and execute the music in such a way that any interruption by outside sources cannot be tolerated; just superb singing.

I own two other recordings of this work: Gardiner's 1984 disc on which he includes some other very 'yummy' early music, a real 'gem'for the early music lover and Cleobury's 2008 King's College disc that employs a choral approach to the 'Stabat Mater'; though well-performed his approach would not be my favorite way to go. There is another excellent disc of Scarlatti's vocal works that include opera arias qnd a Salve Regina with soloist Carlos Mena.

TO QUOTE SCARLATTI He said that he thought "there was scarce any other rule worth the attention of a man of genius than that of not displeasing the only sense (hearing) of which music is the object."

There is a very informative 35 page booklet in French, English and German; this also includes the translation from the Latin.

L. Stanley
5.0 out of 5 stars An ear-opening recording
Reviewed in the United States on February 6, 2008
Verified Purchase
I'm always excited when I run across a new early music ensemble such as this. The Stabat Mater is simply spectacular. It's performed with 10 singers, which means one voice per part. This is not your typical OVPP performance of a choral piece, but rather an approach which makes a good case for this being a work intended for 10 solo voices. The piece is not for double choir - it has 10 independent parts (SSSSAATTBB). With one voice on each, it's possible to hear each individual voice clearly and really showcase Scarlatti's mastery of counterpoint. Other recordings I've heard are very top-heavy and the sopranos tend to drown out the other voices. Also, using OVPP allows the performance to be very energetic, in a way that simply can't be done with 20+ singers. Listen to the "Inflammatus" and "Fac Ut Animae" sound samples to see what I mean. These singers are top notch and I'm really looking forward to future recordings from this young ensemble.

As for the rest of the CD, the performances are solid but the pieces themselves are more subdued. The Te Deum is nice. I'm not really sold on the keyboard sonatas being performed on organ. The Stabat Mater is the title piece and really the one to listen for on this CD. If you've never heard Scarlatti's choral works before, you're definitely in for a treat. If you have, then you're also in for a treat with this extraordinary new ensemble. Either way, you may find yourself wishing Scarlatti had spent less time writing sonatas and more writing choral music!
Read more
7 people found this helpful
Helpful
Comment Report abuse

djc
5.0 out of 5 stars Simply Stunning
Reviewed in the United States on November 12, 2014
Verified Purchase
I was lucky enough to hear Vox Luminis on their recent tour thru the States and was so incredibly impressed I've purchased two CD's of their recordings----and I'm just as impressed and pleased with the recordings as I was with their concert. The Miserere was extremely crisp, clean and soaring.

This CD is simply stunning and if you appreciate this type of music I urge you to add it to your library. You won't be sorry.

pasenoj
5.0 out of 5 stars Marvelous Mater
Reviewed in the United States on April 5, 2012
Verified Purchase
To begin with this work is wonderful. I heard it first with a full
choir. I really prefer this recording because one can hear individuals
and the instruments. Superb voices and instrumentation. The overall
effect is very appealing.
Read more
2 people found this helpful
Helpful
Comment Report abuse
See all reviews