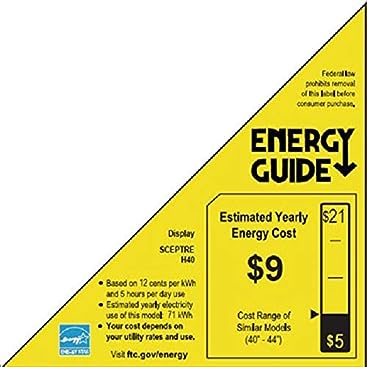 Visit the Sceptre Store
4.4 out of 5 stars 718 ratings
| 115 answered questions
Currently unavailable.
We don't know when or if this item will be back in stock.
See more

Welcome the wide-ranging color and clarity of 1080P resolution into your home with the X415BV-FSRR 40" LED HDTV. With multi HDMI ports (HDMI 1 is shared with MHL), picture quality and streaming access is available at its fullest potential. Clear QAM conveniently delivers cable channels to your HDTV without the need for an antenna. With a MEMC 120 (Motion estimation and Motion compensation), all action-packed sequences will flow smoothly from frame to frame for the ultimate experience. Enjoy every moment of the auto enhanced picture quality especially for all your favorite sports, video games, and movies packed with action. Weight net Weight with stand 14.21 lb net Weight without stand 14.37 IB gross Weight 21.54 ib.

Amazon Customer
1.0 out of 5 stars Arrived damaged ,was unusable
Reviewed in the United States on December 26, 2021
The box arrived with a hole in it.I opened the box to make sure that the tv wasn’t damaged on the day That I received the package. There was also a hole in the cardboard that was over the screen. I looked at the monitor but there were no visible damage,so I sealed the box back up and wrapped it up because it was a Christmas gift.On Christmas Day when we plugged the tv in is when we realized that the tv was unusable.
Images in this review

David
5.0 out of 5 stars Works great as an additional PC monitor
Reviewed in the United States 🇺🇸 on July 19, 2022
Verified Purchase
This TV is obviously too big for most people to use as an additional PC monitor, but that's exactly how I use it. I assigned it as a fourth monitor, set about 3 feet back up on the wall behind my other 3 32" monitors, and it works perfectly. Unlike other LED/LCD TV's I've used as computer monitors in the past, the pixels on this are accurately depicted just like any other standard computer monitor. They are, however, much larger since the resolution is the same (1920x1080 pixels across a 40 inch screen compared to 1920x1080 pixels across a 32 inch screen). But that's what I was looking for since I intended for this screen to be further away than the others.

Picture and video quality is very good for the price. For my use as a fourth monitor, I just use this screen as overflow when I'm working. So I might have 20 windows opened across my other 3 main monitors, while this one is used for media windows like Plex, YouTube, podcasts, etc. I can't say much for playing games on it, since I haven't used it for that, but it does play back video just as smoothly as my other monitors. I would probably prefer a high refresh rate, 4K monitor for gaming, but this TV's specs are more than enough for my everyday uses - coding, Unity3D, Adobe products, office work, and web browsing.

Another nice feature is the lack of smart TV functionality. For my setup I didn't want a smart TV because they tend to cause connection issues with my computer when acting as a monitor. More specifically, smart TV's tend to do "smart" things like automatically switch the input source when they detect connection changes. In other words, anytime my computer goes to sleep or reboots, this functionality would drop connection and require me to manually select the previous input again. Since I wanted to always remain on the same HDMI input, I didn't want to hassle with anything like that. Furthermore, If I ever change my mind and want to add smart TV capability I could just plug in a Fire Stick, Roku, Chromecast, Apple TV, or whatever, in to any of the HDMI ports (of which this TV has 3).

All around, I would definitely buy this TV again. I'm actually so impressed that I might even set up one of my other computers with a huge desk and use several of these as monitors instead of using normal desktop monitors. If you need an inexpensive, good picture, no "smart" integration TV - you can't go wrong with this one.

BooBoo
5.0 out of 5 stars Just buy it,you wont regret it
Reviewed in the United States 🇺🇸 on June 23, 2022
Verified Purchase
Huge bang for the buck at 200 dollars.
1-40 watts.Beat that,I couldnt on a 40 inch screen.Solar?Off grid? Just want to use less power?This is the answer
2-No spyware I could find.A good DUMB monitor,I like that
3-Play around with video color settings.Its not a Plasma,duh,but its darn good for 200 dollars.
4-Sound pitiful.Add your soundbar or use your Surround Sound,it has a setting for it and BINGO,Bobs Your Uncle,you have a nice simple capable Home Theater thats as efficient as you could hope for.

Tammie W.
3.0 out of 5 stars The volume on TV went out
Reviewed in the United States 🇺🇸 on July 16, 2022
Verified Purchase
The volume went out completely. I just bought it less then a year ago..
Read more
Helpful
Report abuse

Got Dibz
4.0 out of 5 stars Great TV for the price but…
Reviewed in the United States 🇺🇸 on December 24, 2021
Verified Purchase
The picture quality is far better than I expected for such a low priced TV but unfortunately the sound quality is absolutely terrible. But a sound bar quickly fixes the problem, but honestly for the price I really can’t complain.
Read more
One person found this helpful
Helpful
Report abuse

Amazon Customer
4.0 out of 5 stars Great picture horrible sound
Reviewed in the United States 🇺🇸 on November 27, 2021
Verified Purchase
With the money you save on this reasonably priced tv with good picture and no annoying "smart" features, you can afford to buy a decent sound system
Read more
One person found this helpful
Helpful
Report abuse

Pat N. Newport, WA
5.0 out of 5 stars Great picture and does the job perfectly.
Reviewed in the United States 🇺🇸 on January 29, 2022
Verified Purchase
This is used as a monitor for a security camera at a friends house so that he can watch his auto shop while watching his regular TV. I have used this model for 4 camera setups also. Very satisfied.
Read more
One person found this helpful
Helpful
Report abuse

Mia Norris
5.0 out of 5 stars Good
Reviewed in the United States 🇺🇸 on March 29, 2022
Verified Purchase
Got it fora good price and love it
Read more
Helpful
Report abuse
See all reviews