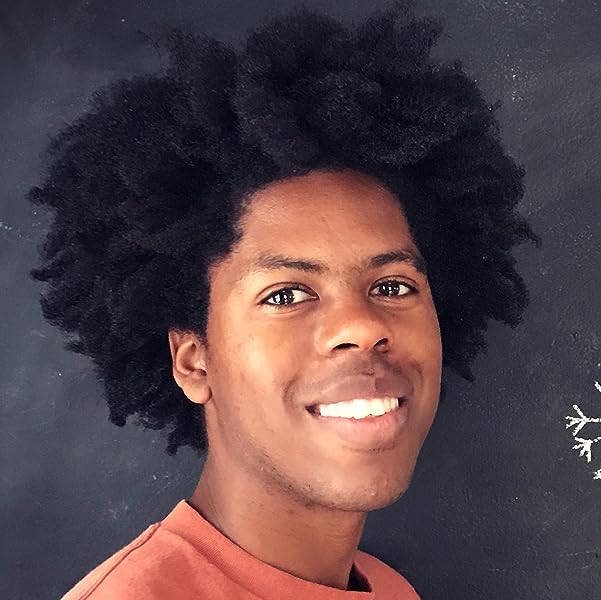 PreS-Gr 1—Step aside, other first day of school books: there's a new school in town. After construction and a summer of tender loving care from the janitor, Frederick Douglass Elementary's first day finally arrives. And what a day it is: hordes of children with all their feelings, mess, noise, new concepts, and even a fire alarm (which the school finds deeply embarrassing). Worried but curious, impetuous, and vulnerable, the school works as a perfect proxy for nervous child readers. Rex's warm and goofy text is brought to life by Robinson's vivid collage illustrations. His signature round-headed, tulip-handed figures are diverse and appealing, from the supportive janitor to the "little girl with freckles" who slowly warms up to school at the same time that the school is warming up to the children. VERDICT A+: an essential purchase that is simultaneously funny, frank, and soothing. A perfect first day read-aloud.—Sarah Stone, San Francisco Public Library

"Robinson (Last Stop on Market Street) gives the school just a hint of visual personification in his flattened, paint-and-collage artwork, as Rex (Moonday) deftly juggles well-placed jokes and keen insights into feeling comfortable in one’s own skin―or bricks, as the case may be."―Publishers Weekly, starred

"Sure to become a staple for first days of school everywhere."―Horn Book, starred

"This charming reversal of first-day-of-school nerves will delight little ones
and help put their own anxieties at bay."―Booklist, starred

"Anthropomorphization of the whole building is a new and promising approach for school-shy youngsters, and it’ll make the already school-positive want to give their beloved building a hug."―Bulletin of the Center for Children's Books, starred

Adam Rex is the illustrator of Amy Timberlake's The Dirty Cowboy and Ste-e-e-e-eamboat a-Comin'! by Jill Esbaum. He lives in Philadelphia, Pennsylvania.

Christian Robinson's award-winning books for young readers include Josephine, which was a Coretta Scott King Honor Book as well as a Sibert Honor Book, and Harlem's Little Blackbird, which was an NAACP Image Award nominee. His book Last Stop on Market Street earned four starred reviews and was on the New York Times bestseller list.

4.7 out of 5 stars
4.7 out of 5
189 customer ratings
How does Amazon calculate star ratings?
Amazon calculates a product’s star ratings based on a machine learned model instead of a raw data average. The model takes into account factors including the age of a rating, whether the ratings are from verified purchasers, and factors that establish reviewer trustworthiness.

karterbury
1.0 out of 5 stars Not what it seems
Reviewed in the United States on August 14, 2018
Verified Purchase
Not the book I needed. The book has the school being scared and even mean to the kids. Not a book I want to read to incoming kindergarteners
Read more
14 people found this helpful
Helpful
Comment Report abuse

Blue Moon
3.0 out of 5 stars Don't like some of the book's themes
Reviewed in the United States on December 29, 2018
Verified Purchase
I ordered two of these books for my granddaughters who were beginning kindergarten. Upon reading them through, however, I did not like some of the themes represented in the book. First, the school experiences being ridiculed by some of the older kids, who say they "hate school." Then, a small girl (a kindergarten student) is afraid and doesn't want to attend school at all. She later says she doesn't like school. It all wraps up OK, but I felt it created the expectation that school is not liked by kids. Not a good message to give to a child who is looking forward to her first day of kindergarten!
Read more
8 people found this helpful
Helpful
Comment Report abuse

David C. Howell
5.0 out of 5 stars A Clever and Effective Way to Reassure First-Time School Goers
Reviewed in the United States on September 9, 2016
Verified Purchase
My wife and I bought this book as a gift for our grand daughter, who was about to begin kindergarten. Since she has been enrolled in a structured day care program for several years, the idea of going off to school was less daunting for her than it might be for other youngsters. Nonetheless, my grand daughter and I both thoroughly enjoyed the story as I read it to her. As adults, we know that the first day of school can be a scary event for young children. Instead of talking about the experiences of those children, the author cleverly tells the same story through the "eyes" of a new school about to open its doors to children for the first time. What a great idea, as the child does not have to relate to any other youngster in particular, thinking to himself/herself, "but that's not me." Instead, the very school itself can be the child's alter ego, and the notion that even the school is jittery on the first day of class can be reassuring when the child walks into his/her building for the first time.
Read more
8 people found this helpful
Helpful
Comment Report abuse

Openbookreviews
5.0 out of 5 stars School's First Day of School
Reviewed in the United States on January 12, 2019
Verified Purchase
Teachers and parents are always in need of some great back-to-school books. One of my new favorites is Adam Rex’s picture book called School’s First Day of School.

The challenge with back-to-school books is that they can get pretty blah and repetitive. They all have the same plot. Students are starting a new school year and everyone is nervous. School’s First Day of School follows this same premise, but with an Adam Rex twist! The entire story is told from the perspective of the school, and the school is named “School!”

School is a brand new school, and she is nervous to have the students arrive. She confides her nerves to her best friend the janitor. The janitor offers her some support and encouragement before she begins her new year.

In the beginning, School does not like the kids that have arrived at her school. They are noisy, and they make such a mess. But as children so often do, they slowly start to win over School. Through the love of one little, freckled-face girl, School’s heart beings to open up to those she shares her walls with.

In the end, School may just learn to be happy that she is a school.

aswal
5.0 out of 5 stars Exactly what you want to read the first day of school!
Reviewed in the United States on August 13, 2016
Verified Purchase
This is adorable! Perfect for first days of school. I am an elementary school Media Specialist and each year I like to read a new book to create excitement for school or the library. This is perfect because have you ever thought about the first day from the school's perspective? What great discussions we are going to have after reading this! I especially love the fire drill scene. Empathy is a big theme in the story as well as embarrassment and pride. Of course award winning illustrator Christian Robinson's pictures are delightful also. I read a lot of picture books but they don't all make me giggle out loud with joy as I'm reading like this one. My students are in for a treat and I can't wait!
Read more
8 people found this helpful
Helpful
Comment Report abuse

BkWyrm
5.0 out of 5 stars Perfect for the first day of Kindergarten!
Reviewed in the United States on July 21, 2016
Verified Purchase
I read all the glowing reviews and purchased this book - and I agree! For all the reasons others have stated, I also give it 5 stars and will read it on the first day to my Kindergartners! Preschool and 1st grade would also enjoy it!
Read more
7 people found this helpful
Helpful
Comment Report abuse

JSWTop Contributor: Pets
5.0 out of 5 stars Really enjoyed this spin on going back to school
Reviewed in the United States on August 18, 2017
Verified Purchase
Simple story but very relate-able to a kid's first day, esp. kinder or 1st grade ages -- but told from the perspective of the school. The illustrations are fun to look at. Both myself and 6 year old daughter enjoyed this story as a "getting ready for school to start" book.
Read more
One person found this helpful
Helpful
Comment Report abuse

MissMocha
5.0 out of 5 stars Five Stars
Reviewed in the United States on December 9, 2017
Verified Purchase
Perfect book for kids starting school, especially those who are nervous about beginning at a new one.
Read more
One person found this helpful
Helpful
Comment Report abuse
See all reviews from the United States

Lisa
5.0 out of 5 stars Arrived fast and in wonderful shape - thank you!
Reviewed in Canada on September 13, 2019
Verified Purchase
Love the book. Great perspective lesson and respect and responsibility lesson too!
Read more
Helpful
Sending feedback...
Thank you for your feedback.
Sorry, we failed to record your vote. Please try again
Report abuse

My Grandson found this book very exciting to get ready for is First Day of School coming in August.

Barb
5.0 out of 5 stars Five Stars
Reviewed in Canada on July 15, 2018
Verified Purchase
Perfect gift for friend who is the new principal of a new school 😀
Read more
Helpful
Sending feedback...
Thank you for your feedback.
Sorry, we failed to record your vote. Please try again
Report abuse
Load more international reviews

Rose
5.0 out of 5 stars Five Stars
Reviewed in Canada on June 1, 2017
Verified Purchase
Perfect for my granddaughter
Read more
Helpful
Sending feedback...
Thank you for your feedback.
Sorry, we failed to record your vote. Please try again
Report abuse

Page 1 of 1 Start overPage 1 of 1
This shopping feature will continue to load items when the Enter key is pressed. In order to navigate out of this carousel please use your heading shortcut key to navigate to the next or previous heading.
Back
Next
Pages with related products. See and discover other items: first grade book, first grade reader, book for first grade, school textbook, first day of school book, best books for first grade