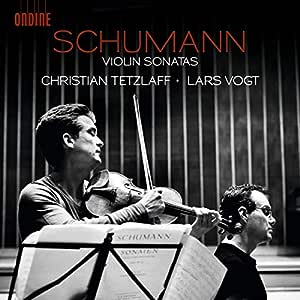 Tetzlaff (Artist), Vogt (Artist) Format: Audio CD
5.0 out of 5 stars 8 ratings
See all 4 formats and editions Hide other formats and editions
Includes FREE MP3 version of this album.&nbspProvided by Amazon Digital Services LLC. Terms and Conditions. Does not apply to gift orders.&nbspComplete your purchase to save the MP3 version to your music library.
Available at a lower price from other sellers that may not offer free Prime shipping.

Ondine is pleased to announce the second chamber music recording with violinist Christian Tetzlaff, featuring his long time musical partner pianist Lars Vogt. With the selection of these violin sonatas for violin and piano by Robert Schumann (1810-1856) the artists show the development of the composer, including the third sonata that was neglected for a long time after Schumann's death and only premiered in 1956.

"Christian Tetzlaff, more than any other violinist around today, is utterly attuned to Schumann's idiom in these later works." --Harriett Smith, Gramophone Choice, January 2014

Huntley Dent
HALL OF FAME
5.0 out of 5 stars Totally committed readings, but be aware of how strange - or feeble - late Schumann can be
Reviewed in the United States on January 29, 2014
The campaign in favor of Schumann's late works seemed like an act of charity when it began, since the composer's widow and heirs suppressed much of it and even went to court to prevent the Violin Cto. from being premiered. That work has had its partisans over the past few decades, but it was extremely rare to hear Schumann's later chamber music, which was considered evidence of his failing abilities as his mental deterioration advanced - he died in an asylum in 1856 at the age of forty-six from mental afflictions whose cause is still debated (it used to be claimed that Clara Wieck's father so vehemently opposed the marriage to Schumann because of suspected syphilis). Some critics are harsh about works written as early as 1850, but Tetzlaff belongs to a group of world-class musicians, among them Martha Argerich and the Capucon brothers, who promote very late scores.

Tetzlaff won praise and awards for a recording of the three piano trios released in 2011, and my reaction to this new release of the three violin sonatas (composed between 1851 and 1853) is akin to the one I had then. There are beautiful moments, especially in the first two sonatas, but Schumann's estate was right to worry - structure is loose, developments rhapsodic to the point of feeling aimless at times, and the melodies far below Schumann's best. For me, this music is too simple overall to add to the reputation of a great composer. At 19 min. and 17 min. respectively, the first and third sonatas perhaps sustain their invention, but the four-movement second sonata is 32 min. long, a length justified mainly by its many peculiarities.

The best I can say is that Romanticism saw madness as being next to inspiration - a somewhat cruel view when you consider mental disorders from a medical standpoint - and the weird and wild opening of Sonata no. 2 could be justified that way. Argerich and friends are wilder in a live reading from the Lugano Festival on EMI, compared to which Lars Vogt's pianism feels fairly restrained. But he and Tetzlaff are among the elite of current German musicians, and there's no criticism to offer of their performances - for the Gramophone to name this CD the Recording of the Month can't be argued against.

The best way to approach late Schumann is to fully absorb yourself into each score, one at a time, and then either accept or reject the musical idiom he wound up with, wildness, looseness, oddness, and feebleness combined.

magwich
5.0 out of 5 stars Quite wonderful
Reviewed in the United Kingdom on March 27, 2014
Verified Purchase
I am a newcomer to Schumann's chamber works and have been bowled over by both the music and the playing on this disc. If anyone is interested in exploring this area, its well worth it.
Read more
One person found this helpful
Report abuse

Calniensis
5.0 out of 5 stars Five Stars
Reviewed in the United Kingdom on May 9, 2015
Verified Purchase
OK
Read more
Report abuse
See all reviews