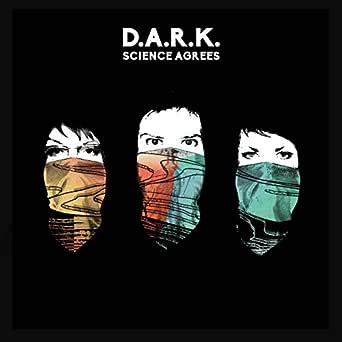 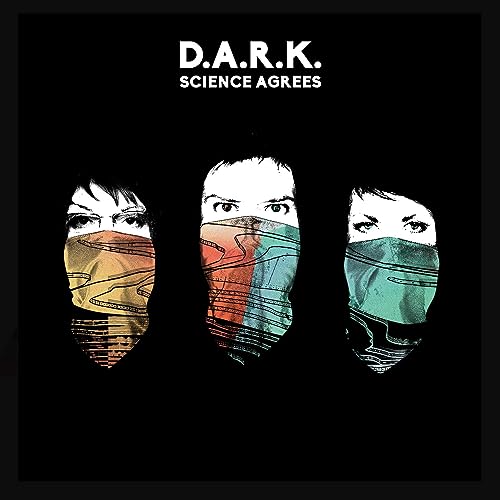 All tracks are written, performed and produced by Dolores O'Riordan, her boyfriend Oleg Koretsky and Andy Rourke, except Loosen the Noose which also includes Glen Samoylov as cowriter.
Additional musicians are Rob Ritchie and Mike Dextro.
A fascinating collaboration!

Very intelligent and meticulously crafted music, not easily accessible. It requires a number of listens to take it in which uncovers some incessant earworms.
Song lyrics are sublimely eloquent, some of O'Riordan's best work.
If the music were as dark as the lyrics this release would be a long dirge, brilliantly subversive work.
Some of the darkest human emotions disguised as pop music.

Science Agrees sounds a lot like college altrock stuff but some of these songs are definitely mainstream worthy, then again the mainstream isn't exactly open minded, is it? The most beautiful and intelligent music doesn't get airplay, you have to find it yourself.
Always a life enriching endeavor.

D.A.R.K.'s vocals are subtle and austere, almost dispassionate. Not much range is used. Reminds me of Depeche Mode, or maybe Joy Division?
It would be interesting to hear some remixing, there's a lot to work with here.

I think it's unfortunate there wasn't more promotion for this release, it was so worthwhile.

Science Agrees definitely is not The Cranberries but maybe more like a reinvention of a mature Dolores O'Riordan, which was an enormous undertaking for an established artist of her stature.

Her work is moody here, it's obvious things were changing for her and she was trying to sort them out.
Much of the music is about failed relationships and disillusionment, Dolores uses her boyfriend's vocals to illustrate this to great effect.
Brilliant concept, the work of genius.

She had a Good Head On Her Shoulders, as they say.
Very intelligent, very sensitive.
Lovely.

She was a Winner, a Survivor.

Compelling Stuff, don't miss this one.

Be sure to watch the rehearsal video for the song Watch Out on YouTube!

Images of D.A.R.K. band members are public domain internet sourced and are not included with this edition of Science Agrees.

A Reviewer
5.0 out of 5 stars Great talent!
Reviewed in the United States on March 31, 2018
Verified Purchase
This is a collection of some great songs by enormously talented people.

The voice of the Cranberries' Dolores O'Riordan always sounds phenomenal, ethereal, and this album is no exception. Sadly, this is the last album O'Riordan released before her tragic untimely passing, though there is apparently at least one more unreleased album to come from her with both D.A.R.K. and the Cranberries. At least two of the songs here are posthumously all the more haunting, knowing that Dolores and Ole were an item and were singing to each other about lyrical themes like love, death and addiction.

The bass playing of the Smiths' Andy Rourke here is muscular and there's always an unexpected note keeping things interesting.

I love how "Curvy" starts out by sounding like it's going to be one kind of song, like "hmm, this is OK," and then the song really kicks in. "Steal You Away" is another favorite, as is "Chynamite." It's definitely worth a listen, though not at low volume or on a cheap tinny phone speaker, which won't let you get the full effect of the production.

This album sounds and fits right in with modern music, but is also recommended for fans of the Cranberries, The Smiths, New Order, and electronic dance music.
Read more
One person found this helpful
Helpful
Report abuse

L. Pike
5.0 out of 5 stars Dolores Fans Must Have This in Their Collections
Reviewed in the United States on August 19, 2019
Verified Purchase
If you love the Cranberries but didn't know about Dolores O'Riordan's side project called "Dark", RUN and buy this masterpiece. Band members include the Smith's Andy Rourke and new talent Ole Koretsky. I discovered this band and album soon after Dolores' death in January 2018 at age 46. She is my favorite musical artist and shockingly died on the same day as my elderly mother who in a further coincidence was named Doris (close enough to be interesting.) While the entire album is excellent, the song "Loosen the Noose" might make Dolores fans cry and personally feel the meaning of the lyrics.
Read more
Helpful
Report abuse

hlk
4.0 out of 5 stars Interesting and has some good stuff although unrefined
Reviewed in the United States on February 8, 2018
Verified Purchase
This is an interesting album and I like it. Obviously if you're looking for a Cranberries or Dolores album this isn't it, but her voice shines anyway. There are couple of good catchy tunes (steal you away, watch out) and a couple of others that I wasn't as keen on, but overall this album is worth having. It's a shame they won't do more together, I think a subsequent record would have been more a more refined and evolved product of the collaboration.
Read more
Helpful
Report abuse

Maker of Things
3.0 out of 5 stars Like a demo
Reviewed in the United States on January 26, 2018
Verified Purchase
Sokay. I was hoping for something more dark and moody. This album seemed kind of thrown together if you ask me. Like a demo. Interesting to hear Dolores O'riordan in a different style, but that's about all.
Read more
Helpful
Report abuse

Marina Gadaborshev
5.0 out of 5 stars Five Stars
Reviewed in the United States on October 26, 2016
Verified Purchase
I love these guys! have been waiting too long for this to come out, but it is worth it.
Read more
Helpful
Report abuse
See all reviews

Jamie5273
3.0 out of 5 stars Three Stars
Reviewed in the United Kingdom on January 25, 2017
Verified Purchase
Not bad but not as good as the individual work by the artists.
Read more
Report abuse