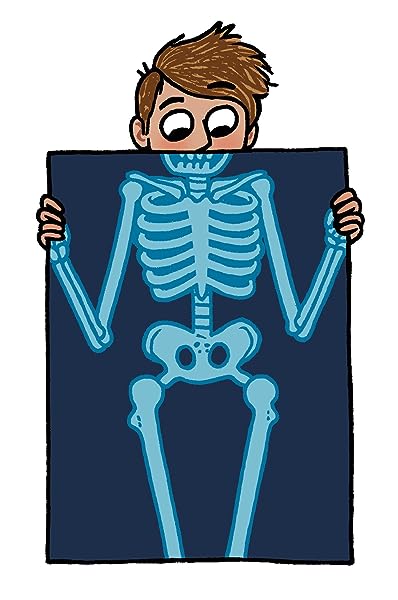 by Maris Wicks (Author)
4.9 out of 5 stars 361 ratings
Part of: Science Comics (27 books)
See all formats and editions
Sorry, there was a problem loading this page. Try again.

Every volume of Science Comics offers a complete introduction to a particular topic--dinosaurs, coral reefs, the solar system, volcanoes, bats, flying machines, and more. These gorgeously illustrated graphic novels offer wildly entertaining views of their subjects. Whether you're a fourth grader doing a natural science unit at school or a thirty-year-old with a secret passion for airplanes, these books are for you!

This volume: in Coral Reefs, we learn all about these tiny, adorable sea animals! This absorbing look at ocean science covers the biology of coral reefs as well as their ecological importance. Nonfiction comics genius Maris Wicks brings to bear her signature combination of hardcore cuteness and in-depth science.

Learn why coral reefs are so important!

Praise for the Science Comics series:

"This series―written by a handful of authors―seems determined to offer a useful introduction to anything a curious grade-school student might wonder about. The insight behind these books is a powerful one. So much information about the world around us is actually better conveyed visually, through charts, illustrations, and sequential panels, than purely using words." ―New York Times

"Like having a Time Life Science Library in comic books. Which is awesome!" ―Popular Science

Maris Wicks lives in sunny Somerville, Massachusetts. She is the author behind Human Body Theater, as well as the illustrator of New York Times Bestselling Primates, with Jim Ottaviani. Wicks has also created comics for Spongebob Comics, DC and Marvel. When Maris is not drawing comics, she can be found prepping slides for her collection of vintage microscopes.

Maris Wicks is a writer and illustrator of science comics, as well as a self-proclaimed gigantic nerd. She has written, drawn, and colored comics for First Second Books, New England Aquarium and Woods Hole Oceanographic Institution, as well as Spongebob Comics, Marvel Comics, and DC Comics. Wicks is the illustrator of The New York Times Bestselling book Primates (2013), written by Jim Ottaviani. Her first solo graphic novel, Human Body Theater (2015), is a 240-page rollicking romp through the major systems of the human body (told in comics format, of course). Her latest book is Coral Reefs (2016). Wicks has also collaborated with science communicator/comic artist and writer Rosemary Mosco to bring you Your Wild City, a weekly webcomic about urban ecology.

When she is not busy making comics, Wicks can be found prepping slides for her collection of vintage microscopes, traveling, scuba diving, hiking, and baking cookies (though never all of those things all at once). She was a program educator at the New England Aquarium for eight years, teaching kids about how awesome marine science is. Now, her work in science education and outreach continues into her comics work: Wicks was the science outreach communicator for Woods Hole Oceanographic Institution onboard the R/V Atlantis for Popping Rocks Cruise in March/April of 2016. Most recently, she was in Antarctica as a part of the USAP Artists &amp; Writers grant, working on a graphic novel about life and science in Antarctica.

Sara A.
5.0 out of 5 stars 2nd grade son
Reviewed in the United States 🇺🇸 on October 28, 2019
Verified Purchase
My second grade son loves Science Comics, and the Coral Reef book is near the top of the list (he likes Volcanoes and Robots a bit more). According to his teacher, my son is reading at about a 4th grade level, and he can plow through these books pretty quickly. He likes that its a graphic novel, I like that the science is presented in such an engaging way. With support I think kindergartners would enjoy reading these books snuggled with their favorite adults and they may hold interested for kids in 5th or 6th grade...especially if the Science Comics could be used instead of a boring text book. This series is great for home schoolers, avid readers, reluctant readers (graphic novels are less intimidating), and science lovers.
Read more
4 people found this helpful
Helpful
Report abuse

Lisa
5.0 out of 5 stars Fabulous books!
Reviewed in the United States 🇺🇸 on January 10, 2021
Verified Purchase
My 9 year old daughter loves these Science comics! We discovered them in our library. There are so many varied topics and the books have so much information in them. Don't be fooled by the graphic novel/comic book format- these books have a wealth of information presented in a very entertaining format. My daughter reads them over and over. Awesome series for both entertainment and learning. Also, I'm a teacher and would absolutely recommend these books.
Read more
One person found this helpful
Helpful
Report abuse

amazonuser
5.0 out of 5 stars Best Science comics for kids
Reviewed in the United States 🇺🇸 on December 14, 2017
Verified Purchase
My six year old loves books written by Maris Wicks. She became a fan after she read her Human Body Theater and she loved Coral Reefs too.
After reading Coral Reefs, she asked me "What animal does not have a head?" and told me it is "Coral". She told me that they eat with their center point. And she talked about Sea Pans or Sea Whips, sea pens, sea anemones, and sea jellies. I have to refer to the book when writing this review to be honest but she can just introduce them to me as if they were her friends. Kids have very good memories but they never want to use them on things they feel boring. But Maris Wicks is such a good writer and illustrator who has made science a really interesting topic. And because of her, we got almost all Science Comics series, but her books are still the best.
Read more
7 people found this helpful
Helpful
Report abuse

ReelPaws
5.0 out of 5 stars Very good way for learning
Reviewed in the United States 🇺🇸 on October 7, 2017
Verified Purchase
when i started reading this great graphic novel i got hooked on the first page! very resonable price and great content. one thing i will mention is that the cover is kind of peely. but i gave it five stars anyway. i like how the book tells the scientific name of the different types of coral reef. i also like the little fish guy narrorating the story. i wish there were more educational graphic novels like this one! if you are thinking about buying it you should! there are no spelling errors or typos. i haven't read any of the other books by this author, like the plague one or the dinosaur one but i really think this author is very creative with their books. if you buy this book i hope you engoy it! (sorry if i had some spoilers!)

Reading is my ESCAPE from Reality!
4.0 out of 5 stars Four Stars
Reviewed in the United States 🇺🇸 on August 8, 2017
Verified Purchase
The Science Comics series uses the graphic novel format to inform kids (and adults) about popular topics. In this case, the topic is coral reefs. The narrator is a sassy yellow goby fish who explains the facts about coral reefs and their inhabitants. There is a wealth of information in this book, and it may be a bit much for younger kids. Then again, if they are interested in the subject, kids can remember a surprising number of facts. The illustrations are bright and beautiful, and labeled diagrams are provided to help explain the facts. In the back of the book, readers will find a glossary, bibliography, and a list of additional resources. The book also gives information about conservation and real examples of what kids can do to help.

The book was a fun read and I learned a lot about coral reefs.
Read more
Helpful
Report abuse

smposto
5.0 out of 5 stars Fun and smart
Reviewed in the United States 🇺🇸 on May 11, 2020
Verified Purchase
My 6 and 8 year old loves this series. They are constantly quoting weird facts from the books.
They appreciate the pictures and jokes. I think it’s best for the 8 and up crew since I’m often explaining word definitions.
Read more
One person found this helpful
Helpful
Report abuse
See all reviews

Amazon Customer
5.0 out of 5 stars Great artwork, great content
Reviewed in the United Kingdom 🇬🇧 on May 19, 2017
Verified Purchase
Highly entertaining, very enjoyable to look at and read. The art is fantastic. It covers a huge amount of scientific content, but does so in an approachable and fun way. I would highly recommend for anyone (child or adult) who is interested in coral!
Read more
Report abuse

Victoria
5.0 out of 5 stars Great book.
Reviewed in the United Kingdom 🇬🇧 on August 16, 2020
Verified Purchase
This is set out in a comic books style. My daughter loved this and learnt so much about coral reefs from it.
Read more
Report abuse

Yaya
5.0 out of 5 stars fun book, not very difficult
Reviewed in Canada 🇨🇦 on March 3, 2021
Verified Purchase
This book focuses on what coral reef is and how to protect it. Not as difficult/deep as the other books in this series, but still provides interesting information. The illustration is fun and vivid as always.
Read more
Report abuse
See all reviews