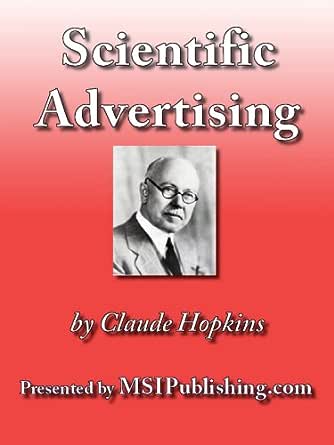 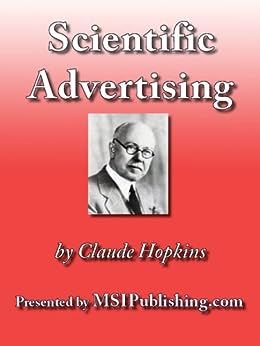 "Nobody, at any level, should be allowed to have anything to do with advertising until he has read this book seven times" David Ogilvy --This text refers to an alternate kindle_edition edition.

Claude C. Hopkins (1866–1932) was one of the great advertising pioneers. He believed advertising existed only to sell something and should be measurable and justify the results that it produced. He worked for various advertisers, including Bissell Carpet Sweeper Company, Swift & Company and Dr. Shoop's patent medicine company. At the age of 41, he was hired by Albert Lasker owner of Lord & Thomas advertising in 1907 at a salary of $185,000 a year, Hopkins insisted copywriters researched their client products and produce "reason-why" copy. He believed that a good product was often its own best salesperson, and as such he was a great believer in sampling. To track the results of his advertising, he used key coded coupons and then tested headlines, offers and propositions against one another. He used the analysis of these measurements to continually improve his ad results, driving responses and the cost effectiveness of his clients advertising spend. His classic book, "Scientific Advertising," was published in 1923, following his retirement from Lord & Thomas, where he finished his career as president and chairman. He died in 1932. Charles Duhigg credits Hopkins with popularizing tooth brushing, as a result of Hopkins' campaigns for Pepsodent. --This text refers to an alternate kindle_edition edition.

Claude C. Hopkins is considered one of the greatest pioneers in direct marketing and advertising. He worked for a variety of companies and advertisers including Bissell Carpet Sweeper Company, Swift & Company, and Lord & Thomas advertisers. He is sometimes credited with the popularity of tooth brushing due to his advertising campaign for Pepsodent. Hopkins eventually retired from Lord & Thomas as president and chairman, and went on to write two books, Scientific Advertising (1923) and his autobiography, My Life in Advertising (1927). --This text refers to an alternate kindle_edition edition.
Read more

4.4 out of 5 stars
4.4 out of 5
370 global ratings
How are ratings calculated?
To calculate the overall star rating and percentage breakdown by star, we don’t use a simple average. Instead, our system considers things like how recent a review is and if the reviewer bought the item on Amazon. It also analyzes reviews to verify trustworthiness.

Paul Ramirez
1.0 out of 5 stars A Classic Book, Shoddy Edition
Reviewed in the United States on June 11, 2019
Verified Purchase
I highly recommend this excellent little book by Claude Hopkins. What I don't recommend is the sloppy edition put out by Merchant Books (2014).

The book does have some nice, quaint, early 20th-century ads and illustrations scattered throughout and on the back cover. But, throughout the book, there are literally HUNDREDS of errors and omissions in its 88 pages. I don't mean just typos. I mean whole words changed or omitted and ENTIRE SENTENCES missing. Also, words added that Hopkins did not write in the original.

How do I know this?

Do yourself a favor and buy the McGraw-Hill reprint of the 1966 two-in-one edition (which includes Hopkins' powerful business biography, My Life in Advertising). Lay the two side by side and do a close comparison, like I did. You'll see what I mean. The 1966 reprint is FAR and away, a hands-down MUCH better (and more accurate) edition.

The folks at Merchant Books need to do some serious editorial reworking and put out a "revised and corrected" edition. Hopkins classic work deserves better.

Amazon Customer
5.0 out of 5 stars This Book Will Challenge Your View Of Ads
Reviewed in the United States on December 8, 2018
Verified Purchase
If you wanna win awards and loose money, don't read this book. If you like knowing how to sell via passive print ads, online landing pages, or even mailed letters, this will get you om the right path to success. To be fair it's more of an overview of direct response marketing, but it's also the gensis of books covering the topic. You need to start here. It's not perfect, he got a few things wrong (ie the demise of fluff ads, which are still ever present) he also seriously misunderstood the power of negativity and fear as it relates to persuasion, but that can be forgiven. He was in fact a pioneer.
Read more
5 people found this helpful
Helpful
Comment Report abuse

It is however well printed...
Read more

AgniaBarto
1.0 out of 5 stars Merely a pamphlet, title is clickbait
Reviewed in the United States on September 8, 2020
Verified Purchase
Don't waste your time. It's not a book, merely a pamphlet. Reads like something author whipped as an afterthought, not even proof read, sentences are missing words. Examples are from 70 years ago, none of it is scientific either. If you're looking for good in-depth advertising knowledge, stick to David Ogilvy, that masterpiece doesn't age.
Read more
One person found this helpful
Helpful
Comment Report abuse

Enzo-kun
5.0 out of 5 stars Love The Book
Reviewed in the United States on December 5, 2018
Verified Purchase
This book has open my eye and see ads in another way. I'm really surprise of what I learn from this book. I'm a rookie and has no sales or business background. After reading this book, I learned a lots of thing about ads and how it work. Highly recommended it. I love this book.
Read more
2 people found this helpful
Helpful
Comment Report abuse

Stephan Tjaden
5.0 out of 5 stars An insight to actual advertising
Reviewed in the United States on July 27, 2019
Verified Purchase
Want to understand advertising and the target markets? The why? The how?

Read this book. I thought I already had a pretty good grasp on the system and this exposes it better still
Read more
One person found this helpful
Helpful
Comment Report abuse

Serge Aurubin
5.0 out of 5 stars Should be in your reference library
Reviewed in the United States on September 29, 2019
Verified Purchase
A timeless classic and definitely worth the read
Read more
2 people found this helpful
Helpful
Comment Report abuse
See all reviews

John Penfold
5.0 out of 5 stars How newspaper ads iwere made to work effectively, nearly a hundred years ago
Reviewed in the United Kingdom on January 11, 2018
Verified Purchase
The author assumes that you you know the old lingo, freely talking about "split runs" and "traced returns". I had to look up a few of these.

The tone is a little dogmatic at times, but for some reason that did not irritate me. I guess that Hopkins impressed me enough with his superior knowledge that I allowed him that.

Much of this stuff still seems relevant today, II kept thinking "That's also true for for advertising copy in ebay and facebook".

In common with other authors in the advertising industry, Hopkins portrays advertising as a beneficial service for consumers, rather than a tool to persuade us to buy stuff against our better judgement. In fairness,, Hopkins does focus on giving us reliable and accurate information from the manufacturer so that we can make our own decision, rather than using "Hidden Persuaders".
Read more
4 people found this helpful
Report abuse

Keyser Soze
4.0 out of 5 stars Great read
Reviewed in the United Kingdom on August 28, 2018
Verified Purchase
It may feel somewhat a little dated because of the examples etc., but the principles explained are good fundamentals. I would like to see a refreshed edition, perhaps more in sync with the age of data but what do I know.
Read more
One person found this helpful
Report abuse

Joan Muni
5.0 out of 5 stars A marketing classic
Reviewed in the United Kingdom on July 1, 2015
Verified Purchase
This book is so good it's very surprising how long ago it was written. It is one of those reads that are required for every marketeer or advertiser. Not only because Claude Hopkins is one of the first modern advertising genius but also because the information given is still very applicable nowadays.

If you are in this kind of business you don't want to miss it.
Read more
3 people found this helpful
Report abuse

Silvia
1.0 out of 5 stars WORST BOOK YOU’LL FIND IN ADVERTISING
Reviewed in the United Kingdom on April 17, 2019
Verified Purchase
The author clearly had nothing to say. 120 pages that could be reduced in half if he had used a normal size font.
Although it was published in 2015 the book is completely outdated. It lacks any sort of specific examples or anecdotes that are not dated in the 60’s.
It’s a complete waste of money and time!
Read more
One person found this helpful
Report abuse

W J
5.0 out of 5 stars Really loved the simple tips!
Reviewed in the United Kingdom on April 12, 2018
Verified Purchase
The author took such a complex topic and broke it down into actionable tips. As a beginning copywriter, it was definitely worth the read!
Read more
One person found this helpful
Report abuse
See all reviews