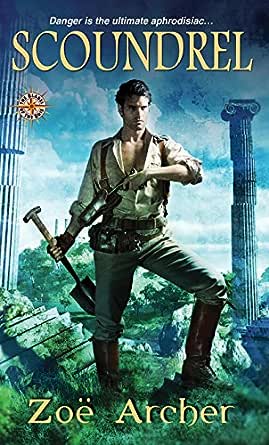 You've subscribed to The Blades of the Rose! We will preorder your items within 24 hours of when they become available. When new books are released, we'll charge your default payment method for the lowest price available during the pre-order period.
Update your device or payment method, cancel individual pre-orders or your subscription at
Your Memberships & Subscriptions
There was an error. We were unable to process your subscription due to an error. Please refresh and try again. 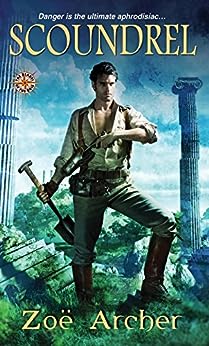 Scoundrel:: The Blades of the Rose Kindle Edition 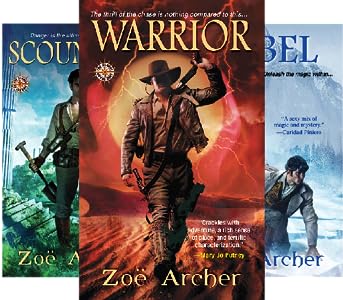 Starred Review. Archer follows 2010's Warrior with another delightful tale of an intelligent, competent woman sharing adventure and romance with a formidable partner. In this version of 19th-century Europe, rival secret societies battle over ancient sources of magic. Meek linguist London Harcourt is brought to Greece by her controlling, secretive father. After a chance meeting with the charming Bennett Day, London learns that her father and his companions want England to control the world's magic, while Bennett's group, the Blades of the Rose, is trying to return the artifacts to the peoples that originally owned them. London, finally ready to make her own choices, becomes an active participant in the race to save the mystery of Greek fire from abuse by her father's organization, beginning a relationship with Bennett along the way. London's personal growth paces the adventure story beautifully, and readers will cheer for both the romance and the Blades.
Copyright © Reed Business Information, a division of Reed Elsevier Inc. All rights reserved. --This text refers to an out of print or unavailable edition of this title.

S. Donovan
5.0 out of 5 stars Holy smokes. And I don't even *like* scoundrels.
Reviewed in the United States on September 24, 2011
Verified Purchase
Most romance readers love a bad boy. An incorrigible ladies' man. A rake, if you will. Generally speaking, I don't.

But beautiful, clever Bennett Day is different. He's a complex and interesting character, and his honesty, loyalty to his cause, and generous spirit won me over.

Our heroine, London Harcourt, is fantastic. During a stifling childhood, marriage, and widowhood, her only rebellion has been to secretly learn ancient languages. When her father learns of her knowledge, he brings her along on a trip to Greece, where she's eager to experience and discover absolutely everything. However, her discoveries about her father and her late husband devastate her. The ties London has to her family and her past, and the desire and connection she Bennett feel with each other, lead to the kind of emotional scenes I like to read over and over again.

Scoundrel takes place in Greece and an outlying island as well as on ships in the Aegean sea. The author paints this world in sun-soaked, dazzling detail. I loved Athena, a Blade and powerful witch, and the flirtation between her and the ship captain was a fun counterpoint to Bennett and London's passionate and conflicted relationship. Their emotional story is realistic and believable all the way through. As with all four of the Blades novels, the action scenes are exciting and imaginative, the depictions of magic are utterly original, and the love scenes will make your toes curl.

Amazon Customer
5.0 out of 5 stars I Am So Impressed With This Series!!!
Reviewed in the United States on October 17, 2010
Verified Purchase
4.5 Stars

This was an excellent follow up to the fabulous first book, Warrior. I was pretty stoked about that, because it gives me confidence about how the rest of the series will turn out! Sometimes an author just cannot live up to how excellent the first book in a series is, and it is such a disappointment to the reader. That's not the case here!

I think the author made an exceedingly smart choice by moving the location of this book. We aren't in Mongolia with this one, we're in Greece and the islands nearby. I loved the Mongolian scenery, but by having this one in Greece I didn't even have the slightest urge to stop and compare it to the first book.

We didn't get quite the same sense of culture and information about Greece that we did about Mongolia in the first book, but that's understandable. The characters were on a ship for most of the book and weren't visiting the islands enough to give a well developed sense of the people there. We did get a glimpse of them now and then, but they did feel more like scenery than full robust characters.

I really liked getting to watch the romance between the secondary characters on the ship. We didn't actually dwell on their relationship from their pov, we just got to watch it from Bennett and London's pov. I liked that because I never felt that it took away time from London and Bennett's relationship (as I sometimes do with secondary romances that have half of the book devoted to them) but I did look forward to a glimpse of their relationship progress now and then. I loved that they felt necessary to the book even if it wasn't their story. I especially enjoyed watching Athena come into her own with her powers. It was really nice getting a glimpse of someone who has gifts that they were born with. Although I do still wonder about Bennett's affinity with shadows...

I really enjoyed watching London move past her initial restrictions. Not only was she the daughter of the enemy trying to fit in with a group who hates her family, she was raised as the traditional delicate English rose. She didn't have adventures and she didn't know how to take care of herself in a fight. It was nice that she wasn't magically a Xena-like character right out of the gate. I enjoyed watching her become someone stronger and more confident in herself. I also liked watching the joy and verve she had for every new experience she came across. Here was a girl who had longed for life and finally she got a taste of it.

I really enjoyed the initial struggle and anger London had over the reveal of Bennett's past with her. It added some much appreciated tension. I also enjoyed watching Bennett circle around her trying to find a way to insert himself into her regard. He wanted her to look at him and see someone she wanted to spend time with. I also really liked that London did not cast aside the life that she had known at the drop of a hat. I found her behavior much more realistic and interesting than if she had known Bennett for five minutes and believe him right away. Then I would have just thought she was an idiot!

Bennett was such a fun character! I really enjoyed being in his head. Just like with the first book, his internal dialogue kept me giggling. I really enjoyed his life outlook. He was such an in the moment guy. I don't mean that he didn't have the ability to think long term, I mean that he could take pleasure from the little things that he encountered daily. He didn't need much to stay happy.

I really felt for both of the characters when they had that discussion about what love meant to them. I liked that London wasn't willing to settle for less in the long term, but didn't dismiss his view as foolish. She never dismissed his belief, she just made it clear that it didn't mean the same thing to her. My heart broke for them later when he kept saying something and she kept ignoring it. (vague on purpose to avoid spoilers!) Then when they talked about the "monkey hats..." I couldn't help but sigh. :)

The only reason I gave this .5 stars less than the first one was because I wanted a bit more struggle on Bennett's part winning London. Where I loved the first one for its lack of drama, I really would have appreciated a bit more here. I just felt that everything came easily to Bennett and I would have enjoyed watching him work for it more. Like he did when she was ticked at him on the ship originally. He kept sticking a hand out hoping for her to give him an opening and she just kept slapping it away.

Other than that tiny little niggle I enjoyed the book immensely! I can't wait to get my hands on Rebel!
Read more
4 people found this helpful
Helpful
Report abuse

Karlyn
5.0 out of 5 stars We need more hero's like Bennette!
Reviewed in the United States on October 15, 2010
Verified Purchase
Wow, really good. I think I liked this one even better than Warrior (book 1 in this series). Scoundrel was such a fun, fast, thrilling and sexy historical romance laced with magic and a save-the-world plotline. I especially loved Bennette and London together, they made a great couple. Bennette was such a likable man with a great sense of humor and a flare for charming women, and London was his perfect match. She is the sheltered daughter of his enemy, and is a brilliant self taught linguistics scholar, and she brings him to his knees as he realizes he is falling deeply in love with her. This storyline is centered around Greece and has some Greek mythology too. I highly recommend to fans of steamy PNR or historical/adventure type romances. Can't wait for the next book in the series to come out in a few weeks!
Read more
Helpful
Report abuse

Vybeosa
4.0 out of 5 stars Good story
Reviewed in the United States on May 19, 2012
Verified Purchase
I really enjoyed this book, which mixed fantasy, adventure and romance really well. I was also delighted to see a female hero who isn't a virgin (there is this trope that seems to go around romance novels that if a woman is not a virgin, she is not an acceptable heroine).

The evil guys are a bit too simplistic for my taste though, but that is one small flaw in the middle of a lot of good stuff.
Read more
Helpful
Report abuse