I fell in love with rural Spain in 1970 and moved to the Sierra Guadarrama in 2003 to continue my creative writing as John McGahern had suggested many moons before that. Since then I've written The Road to Abbeyshrule, Tell Me Another, Someone's Always Watching You and La Reina de Corazones/The Queen of Hearts. Right now I'm writing As Far As Turn Back and hope to have it up and running sometime in 2022. I do a little teaching, a lot of fasting and abstinence to keep body and soul together in the fond hope that one day soon my writing will allow me a modicum of creature comfort. In the meantime, if a White Knight were to come along I'd be happy to spend all my time writing. 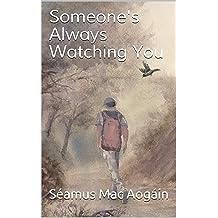 Someone's Always Watching You (The Abbeyshrule Trilogy) Jan 12, 2021
by Séamus Mac Aogáin, Jaime García Cabello
( 3 )
$5.99
After being found in a compromising position by her father, Annabel and Seamie decide on a suicide pact to escape his fury. Their old friend Tess, the White Witch, reappears in time to save them as they are being swept to a watery grave in Lough Sheedon. Rather than lose the love of her parents and that of her young lover, Annabel decides to join a monastery in hidden Spain. Old Tess reassures Seamie she will return to him one day. Years later after a failed business due to foreclosure during the banking crisis, he decides to try to find his lost love. He has few clues to go on except that Tess once told him that "he would find his nest where the eagles rest far away from here." Something told him it had to be Spain because they had studied the language and had often spoken about doing the Camino together because of Tess's belief in Abbeyopia, a Paradise where the souls of those who believe in Mother Nature retire to. It was time to go because the banks and the police were closing in on him, suspecting rightly, that he had more to hide than money. A series of coincidences leads him along the northern coast of Spain where he meets a school pal who has information that might help him find Annabel and a buyer for the unusual package concealed in his trusty jeep. Many twists and turns later he learns that her reason for leaving was twofold, spiritual and physical but that her love for him has never wavered. Together again, they set out on an adventure to beat all adventures, the recovery of the lost treasure of María, a beautiful girl kidnapped from her family by gipsies but later left in the same convent that Annabel lived in. Now a beautiful young lady, she has a mind-map of where it can be found in a cave in Los Alpujarras south of Granada. She joins them but the gipsies have traced her through their vast network and are after her and the treasure. Intrigue, treachery, betrayal and mayhem follow them every step of the way until Nature finally takes over with unexpected repercusions.
Read more
Other Formats: Paperback 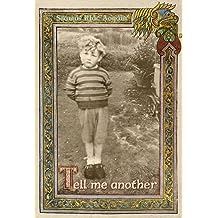 Tell Me Another Nov 22, 2015
by Séamus Mac Aogáin, Patricia Philson, Virginia Rodríguez, John Liddy, Simon Keegan
( 2 )
$5.99
Tell Me Another is the sequel to The Road to Abbeyshrule which introduced us to Tess, the white witch, storyteller, mentor and philosopher who was adopted by Seamie and his girlfriend Annabel. Together they form a bond that could not be broken as they uncovered the hidden underbelly of their tiny rural village and sought to drag it into the 20th century.
Along the way they meet the good, the bad and the ugly that can be found in any village in any part of the world. Tess tries to save the young couple from the undue influence of organised religion, a State enmeshed in such traditional values as well as the powerful passion that rises between the young lovers.
Read more
Other Formats: Paperback