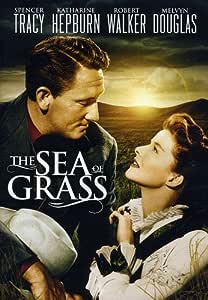 Share
STREAM ANYTIME with Prime Video from $5.99
Have one to sell?
Sell on Amazon

Brewton's cattle empire includes a million acres of grazing land. Lutie marries him and they have a daughter Sara. Lutie goes alone to Denver where she and lawyer Chamberlain conceive a son Brock whom Jim later accepts with resignation. Long afterward Brock is killed by a posse and Susie brings Lutie and Jim together once more.

It's no surprise that Elia Kazan directed the oddly political Sea of Grass, the story of a man (Spencer Tracy) who reveres the grass plains and thinks they are no place for homesteaders and farmers. His wife (Katharine Hepburn) disagrees, however, and the two find themselves at odds. But putting politics aside, this is a melodrama with a capital "M," so throw in some adultery, an out-of-wedlock baby, and Hepburn speaking even more breathlessly than usual, and you might find yourself giggling at some of the more dramatic moments. Even more out of place, Strangers on a Train star Robert Walker plays Hepburn and Tracy's grown son, who cares more about cards and drinking than the land. There are sweet moments in this film, but the politics of the land is ultimately more compelling than the relationships. --Paige Newman

4.3 out of 5 stars
4.3 out of 5
86 global ratings
How are ratings calculated?
To calculate the overall star rating and percentage breakdown by star, we don’t use a simple average. Instead, our system considers things like how recent a review is and if the reviewer bought the item on Amazon. It also analyzes reviews to verify trustworthiness.
Top reviews

D. Easter
5.0 out of 5 stars Movie before it's time!
Reviewed in the United States on May 17, 2014
Verified Purchase
The Sea of Grass dealt with some heavy duty issues like adultery and land ecology. It was surprising or probably even shocking movie for the year 1947. There's a scene between Katharine Hepburn and Melvyn Douglas where there's no mince words about the attraction between them -- some real adult dialogue. I was not expecting much based upon some reviews this movie received but I though this is and was an underrated movie in my opinion. Elia Kazan, the director along with a terrific cast of actors made this movie worth watching!
Read more
5 people found this helpful
Helpful
Comment Report abuse

Lawrance Bernabo
HALL OF FAME
3.0 out of 5 stars For me the least of the Tracy & Hepburn movies
Reviewed in the United States on February 9, 2005
Verified Purchase
"The Sea of Grass" is the fourth of the nine films that Spencer Tracy and Katharine Hepburn made together, and for me it is the least appealing one of the lot. The 1947 MGM film was directed by Elia Kazan from Conrad Richter's novel, "The Sea of Grass" about the fierce struggle between the open-range cattlemen and the farmers who are civilizing the Old West. Two years earlier Tracy and Hepburn had made "Without Love," and in the interim period Tracy had starred on Broadway in Robert E. Sherwood's "The Rugged Path." By the time Tracy returned to Hollywood his hair had turned gray, which made him look much older than Hepburn. Fortunately this worked for the film in terms of being another dimension of the gulf between the husband and wife they played in the film.

Lutie Cameron (Hepburn) is a St. Louis belle who comes to New Mexico to wed cattle baron Colonel James B. Brewton (Tracy). The problem, of course, is that the Colonel loves the endless "sea of grass" of his domain that his cattle roam much more than he loves his wife. Lutie is also horrified by the way the cattlemen treat the farmers, which costs her the only female friend she has, Selina Hall (Ruth Nelson). To get back at her husband, Lutie has has an affair with Brice Chamberlain (Melvyn Douglas), the lawyer who is the Colonel's mortal enemy. The scandal tears the Brewton marriage apart and Lutie leaves, although her illegitimate son, Brock (Robert Walker, who would go from playing Hepburn's son to being her lover in their next film together, "Song of Love") and her daughter Sara Beth (Phyllis Thaxter) stay behind on the ranch. In the end, personal tragedy forces Lutie and the Colonel to reconcile and this 2-hour-plus movie is finally over.

Despite having two of the most respected actors of all time in the leading roles "The Sea of Grass" was probably doomed as soon as Kazan was hired to direct. Kazan's introspective, psychological, Actor's Studio approach to acting is personified in cinematic history by Marlon Brando, whose performance in "A Streetcar Named Desire" is arguably the greatest acting job ever. But while Brando represents one great acting tradition of the 20th century, but so does Laurence Olivier's classical tradition and the naturalistic, instinctive style epitomized by Spencer Tracy. Given their diametrically opposed approaches, the director and his star might as well have been speaking different languages. The result, is that Tracy, one of the greatest actors every, pretty much sleepwalks through this entire movie.

Add to this the fact that Tracy's character is rather unsympathetic from start to finish. He gives orders without explanation, expecting obedience whether any one agrees with him or not, a philosophy that applies to his family and hired hands alike Richter's novel could fill in the gaps as to what Brewton is really thinking, but there is nothing comparable in the script by Marguerite Roberts and Vincent Lawrence. Chamberlain is hardly a better alternative for Lutie, whose adultery might be understandably but is hardly commendable, especially by the standards of post-War America. It is rather surprising that Lutie, only a step above being a mail-order bride, has the gumption to stand up to her husband, even if it means going behind his back. There was more chemistry between Tracy and Hepburn in "Keeper of the Flame" when her character was in mourning for her dead husband. No wonder Edgar Buchanan, who plays Jeff, the cook on the Brewton ranch, keeps stealing scenes from the two stars.

"The Seas of Grass" comes down to how big of a train wreck there will be at the end of the film as the head strong Brock Brewton takes the worst traits of the man he thinks is his father and adds them to pretty cruel mean streak. There is a potential Greek tragedy buried here, but once Lutie leaves the ranch there is no sympathetic figure remaining to cause us to care. Adding insult to injury, the sea of grass of the title exists entirely in terms of rear screen projections behind the cast. No wonder there seems to be something inherently false about the story and the performances. Still worth watching because Tracy and Hepburn are in it, but his rather empty performance is quite disconcerting. The dynamic of most Tracy & Hepburn films is the battle of the sexes. Usually one of them wins, but this time the verdict has to be that he loses.

Margaret J. Hayes
5.0 out of 5 stars Tracy and Hepburn
Reviewed in the United States on September 10, 2018
Verified Purchase
I like all of the movies those two made together
Read more
2 people found this helpful
Helpful
Comment Report abuse

bridget
5.0 out of 5 stars Enjoyable movie
Reviewed in the United States on November 18, 2019
Verified Purchase
Enjoyed this movie, always like to see Hepburn and Tracy together
Read more
Helpful
Comment Report abuse

Becky Mills
5.0 out of 5 stars Love these two actors
Reviewed in the United States on July 9, 2019
Verified Purchase
I love it
Read more
One person found this helpful
Helpful
Comment Report abuse

Jordan M.
3.0 out of 5 stars All in all a good product.
Reviewed in the United States on March 28, 2017
Verified Purchase
A very dramatic film. Not my favorite with Hepburn and Spencer but I did enjoy the film. It’s worth a watch.
Read more
2 people found this helpful
Helpful
Comment Report abuse
See all reviews