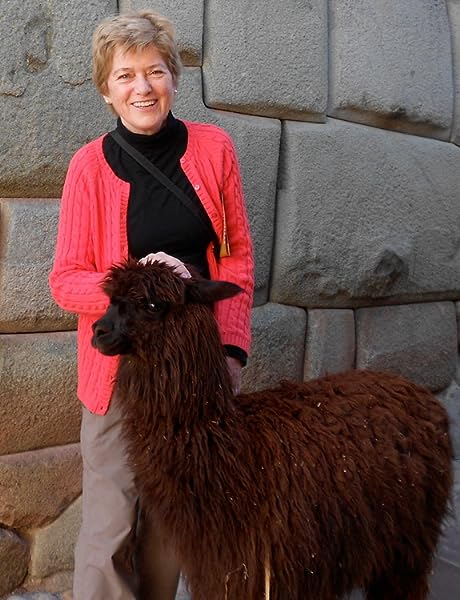 by Solveig Eggerz (Author)
3.8 out of 5 stars 18 ratings
See all formats and editions
Sorry, there was a problem loading this page. Try again.
Fiction. In the rubble of 1947 Berlin, artist Charlotte flees her past and everything she has lost by responding to an ad calling for 'strong women who can cook and do farm work' in Iceland. But painful memories and ghosts follow Charlotte as she struggles to make a new life in a raw and rugged landscape. This powerful debut novel celebrates the power of storytelling as a way of reassembling the fragments of Charlotte's broken self and move her--and everyone she loves--toward peace.
Read more
Previous page
Next page

New: Sarah Selects
Sarah Selects is a new book club hosted by Amazon Editorial Director Sarah Gelman. Whenever Sarah finds a book that sticks with her, she loves to recommend it to her friends and family. These books are the books she's sharing, so members can talk about them after they’re done reading. Join the club to view and reply to posts from Sarah and get email updates when the December book is chosen. Join the club.

A native of Iceland, Solveig Eggerz is descended from a long line of writers. Her articles appear in Palo Alto Review, Lincoln Review, The Northern Virginia Review, and Issues, the publication of the American Council for Judaism. She lives in Alexandria, VA.

A native of Iceland, Solveig Eggerz published her first novel, Seal Woman, in 2008 with Ghost Road Press. In 2011 it was published in Icelandic and was nominated by the literary society Krummi for the Red Crow Feather Award for “most interesting descriptions of sex.” As a manuscript, Seal Woman won first prize for fiction from the Maryland Writers Association. In 2009 it was an Eric Hoffer finalist. Book groups ask—is it autobiographical?

Solveig, who earned a PhD in Comparative Literature (English, German, and Nordic) from Catholic University, teaches creative writing in the Washington D.C. area. For five years she taught research and writing at colleges including five years in a master’s program for the Department of Defense. Her father, Petur Eggerz, was a best-selling author in Iceland.

Her second work of historical fiction (1900-1944), Curve of the Earth, will be published in 2013. A chapter from that book, “Midwife,” won first prize in the 2009 statewide Virginia Golden Nib contest. The manuscript of the novel was a semi-finalist in the 2012 William Faulkner-William Wisdom Creative Writing Competition. Her writings appear in The Northern Virginia Review, Palo Alto Review, Lincoln Review, Midstream, Issues, The Journal of the Baltimore Writers Alliance, The Christian Century, and Open Windows: An Anthology.

She loves to hear from readers at solegg@verizon.net.

An excellent read, Both a pleasure and a challenge. Two totally contrasting worlds are presented. I can also imagine it to have been a challenge for the author to bring these together and connect in a single book with a limited number of characters. The worlds: the urbanized and educated middle class in Nazi-period Berlin, including many Jewish; and a total and striking contrast to post-WWII rural Iceland.

I had spent two years, 1980-82, in West Berlin in the same districts covered by Ms. Eggerz -- Charlottenberg, Wilmersdorf, Dahlem. Further, being of Jewish origins myself, I could easily understand and relate to the geography and community described in this part of the book.

Rural Iceland was a totally different world -- for me imaginative and poetic presentation that required more of an intellectual effort. But a pleasure just the same.

Some of the symbolic and poetic sections of the Icelandic sections will have me rereading with an opened mind, which I look forward to.

I am thankful to Amazon for making this book easily and readily available, and will no doubt be purchasing and reading more.

Hostess
3.0 out of 5 stars Excellent Writing
Reviewed in the United States 🇺🇸 on April 23, 2014
Verified Purchase
To be honest I haven't finished reading Seal Woman yet.

Although the story (ies) is fascinating and full of history (re post WW2 Germany, etc.) the switch between the stories, for me, is somewhat confusing. And, I've read a number of multiple stories ... there is something about this that I couldn't connect with.
The characters are very realistic (for their times) and portrayed well .... and, as I've said, the writing is excellent.
I've decided the put it down for a couple of weeks and then return. Will probably love it then.
Read more
Helpful
Report abuse

Linda Morefield
5.0 out of 5 stars a small masterpiece
Reviewed in the United States 🇺🇸 on May 24, 2008
Verified Purchase
SEAL WOMAN is a beautifully written, important book. The story is immediate and compelling--Charlotte is a woman who has lost everyone and everything that she loves--husband, child, country, language. The book shows how she remakes her life, saving herself and those around her. The events are moving, always surprising, completely believable. Based on historical happenings, this wise book shows how myth, art, language, and story telling can mend the world. I read the book in one sitting, could not put it down--(The last book that held me so entranced was Gone With The Wind.) This book deserves as big an audience.
Read more
8 people found this helpful
Helpful
Report abuse

L. Eckmann
5.0 out of 5 stars Fiction with an artist's eye
Reviewed in the United States 🇺🇸 on February 13, 2010
Verified Purchase
Seal Woman rolls off the page like the finest poetry and sparkles with sunlight off the waters of Iceland. Characters of few words, deep thoughts and large hearts who will make you smile and weep. You will be charmed by the Icelandic myths and dazzled by it's sparse but rich landscape that glows like a Monet. Solveig Eggerz has painted a masterpiece that will live in my minds eye for years to come. I hope the studio of her mind is filled with more paintings to share with us in the future.
Read more
One person found this helpful
Helpful
Report abuse

V. Jóhannesson
5.0 out of 5 stars Well written and interesting topic
Reviewed in the United States 🇺🇸 on August 12, 2008
Verified Purchase
The saga of Charlotte is very dramatic in a very dramatic and terrible period of time. Solveig Eggerz has the skill and knowledge to tell the tale of Charlotte's fate in such manner that it gives a vivid discription of life in Berlin and Iceland of that time. This novel also gives a reason to ponder how many you meet with difficult past and are never able to share their ordeals with other people. Seal Woman
This book is definitely worth your time.
Read more
4 people found this helpful
Helpful
Report abuse

Ruta Sevo
5.0 out of 5 stars Beautifully crafted, fascinating journey
Reviewed in the United States 🇺🇸 on July 30, 2015
Verified Purchase
Seal Woman is beautifully crafted and flows through two cultures: rural Iceland after World War II and Germany during the War. Charlotte is deeply portrayed, through her traumas in Germany and the culture shock entering the security and simplicity of Icelandic farm life. The book gives us a rich experience in exotic foreign places and complex, interesting characters.
Read more
One person found this helpful
Helpful
Report abuse