You've subscribed to Outbreak Task Force! We will preorder your items within 24 hours of when they become available. When new books are released, we'll charge your default payment method for the lowest price available during the pre-order period.
Update your device or payment method, cancel individual pre-orders or your subscription at
Your Memberships & Subscriptions
There was an error. We were unable to process your subscription due to an error. Please refresh and try again. 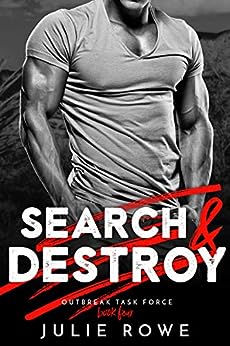 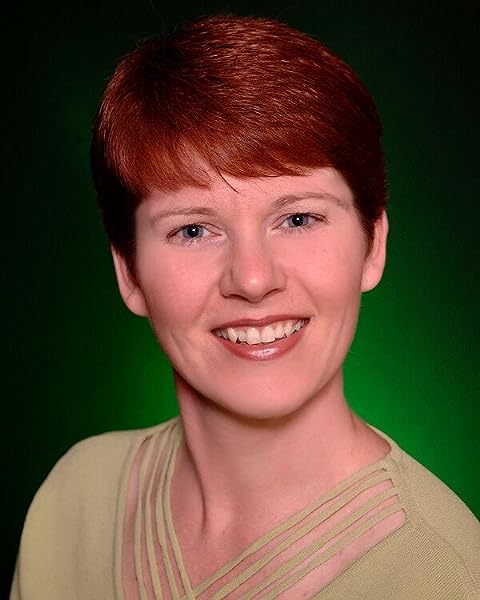 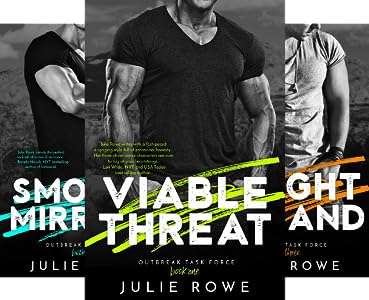 "Julie Rowe is always a sure bet when it comes to writing edge of your seat suspense with the perfect amount of romance thrown into the mix. Her characters, along with the plot have made this series an absolute must read for me. This was yet another 5 star plus read." -Lori Z., Goodreads

"Julie Rowe creates a chilling story in Search and Destroy.  The threat to mankind is real and harsh. The entire book is a high-octane race against the clock with lives in the balance." -Jeanne S., NetGalley

"I've had my fair share of paranormal and zombie books but to be honest, this one was a breath of fresh air!!! Really. Witty, charming and simply--sexy!" -Haya Z., Goodreads

"A very intense and interesting story from Julie." -Jacqueline A., NetGalley

"Julie Rowe provides a high paced action novel with steamy romantic scenes thrown in. Her characters are well-crafted and her subject knowledge is spot on. The multifaceted plot included everything from relationship quandaries to bioterrorism threats and kept the reader engaged the entire time." -Tara M., NetGalley

"I absolutely love this series. From the first page you have to dive right into the chaos and adrenaline and it never lets up until the end." -Suzette P., Goodreads

"Wow! This book is FULL of drama and intrigue. The twists and turns, threats upon threats and fast-paced action just kept my mind occupied the whole way through. I was hooked and couldn't get enough. I held my breath and was worried sick for the whole of humanity; we live in such a dangerous world that I can absolutely believe that something like this biological terrorism act could be a serious possibility. It is certainly very thought provoking." -Marian G., NetGalley

4.4 out of 5 stars
4.4 out of 5
72 global ratings
How are ratings calculated?
To calculate the overall star rating and percentage breakdown by star, we don’t use a simple average. Instead, our system considers things like how recent a review is and if the reviewer bought the item on Amazon. It also analyzes reviews to verify trustworthiness.

Catherine
5.0 out of 5 stars Page-turning Romantic-Suspense! Definitely recommend!!!
Reviewed in the United States on October 7, 2019
Verified Purchase
Search & Destroy is book 4 in the Outbreak Task Force. (And while it is a standalone romantic suspense novel, I'd strongly recommend starting on book 1.) All of the Outbreak Task Force books have been nailbightingly intense, fast-paced and yet warmly romantic too. It's a crazy combination that Julie Rowe makes work. And this latest installment is no exception.
Search & Destroy is Dr. Carmen Rodrigues & John Dozer's story. It's beautifully written, and just as intense and suspenseful as the first three books. The characters are smart, kind, and endearing and the guys (in the books) are just as hot as their covers imply! Don't wait! Grab your copy today!
Read more
Helpful
Report abuse

Beckyrae99 (Becky Wise)
TOP 1000 REVIEWER
4.0 out of 5 stars Another amazing read in the Outbreak Task Force series...
Reviewed in the United States on August 26, 2019
Verified Purchase
I love what Julie Rowe brings us with Search and Destroy. This book is full of suspense as Dozer and Carmen work together to solve the next outbreak the outbreak task force faces. I love these two together. They work so well together. Carmen is in charge and knows how to handle any man. Even with the history Carmen and Dozer share it is still evident that the chemistry has never gone away. Dozer he is almost unstoppable and put through the wringer and still comes out even stronger in the end. I love that we still get some comedy in the form of DS throughout this book and series. If you don't know who he is then you really need to start from the start. I couldn't put this one down and was glued to the pages from the very start. I'm hoping there are more Outbreak Task Force books to come yet. Go one-click this one.
Read more
Helpful
Report abuse

booklover
2.0 out of 5 stars Let down
Reviewed in the United States on September 14, 2019
Verified Purchase
I love this series but this one was a serious let down. It almost feels as if there was a "get it done" attitude by the author. The two main characters have been in the previous books, the readers knew them. In this book they were reduced to cardboard cut outs. What happened?
Read more
3 people found this helpful
Helpful
Report abuse

Amanda P.
4.0 out of 5 stars This hits a little too close to home
Reviewed in the United States on April 17, 2020
Verified Purchase
I started this series months ago and forgot I still had the 4th book downloaded. Since we all social distancing now I thought I’d pick up my Kindle and read some books I’d been saving. With everything going on with the spread of Covid-19 right now, this book seemed super timely and kind of hard to read at the same time. I did enjoy it, but you may want to wait until the virus spread lessens.
Read more
Helpful
Report abuse

Kindle customer KC
5.0 out of 5 stars WOW just WOW!
Reviewed in the United States on September 15, 2019
Verified Purchase
John and Carmen 's story was great! A biological war is not that far fetched. Putin already has been experimenting in that area. The action the banter was great.
Hey when does DS get his story told?
Read more
Helpful
Report abuse

Linda Krause
5.0 out of 5 stars Love this series
Reviewed in the United States on May 23, 2020
Verified Purchase
It felt eerie how this book (written in 2019) was talking about things and situations that we are dealing with today. Wondering if there will be more in the series.
Read more
Helpful
Report abuse

Linda Thum
2.0 out of 5 stars A little too much profanity for me
Reviewed in the United States on August 28, 2019
'She had told him in no uncertain terms she didn’t want him to take care of her, yet here he was doing it anyway. Instead of feeling angry, she felt guilty.'

That pretty much was the tone of the whole story. John has loved Carmen since they 1st met 9 years ago on duty in Afghanistan. They have one night together while in an extremely desperate situation where both thought they might not survive but the next day, Carmen ups & disappears when a jealous colleague spitefully informs her that John is married. He was then in the midst of a divorce. Nothing much in the story on his 1st marriage or why it failed. Thought that was a huge gap in the story.

FF 9 years later & Carmen is the competent, independent Director of the CDC’s Outbreak Task Force. Forced to work closely with John when he is assigned as her bodyguard, she keeps things purely professional and businesslike. When a virulent virus starts an epidemic of massive proportions and both John and she are somehow being assassination targets, John’s protective instincts go on overdrive – he would never let anything hurt the woman he loves – but Carmen keeps reacting in anger. Which after a while got tiring.

A little too much easy profanity for my taste as well. The previous book (#3 which I absolutely loved) was so much better.
Read more
3 people found this helpful
Helpful
Report abuse

I'm a big fan of Ms Rowe's bio-terrorism stories as they are both insanely suspenseful and incredibly realistic. It's shocking how frightening the scenarios outlined in her stories are because this shiz could totally happen, and it's not all that hard to make a reality. On top of that, the stories get the adrenalin pumping as danger stalks the characters as they race against time to save countless lives at risk of being easily infected with deadly infectious diseases and adding to the high death toll. Ms Rowe certainly doesn't pull any punches as she writes these fictional (thank goodness!), what-if scenarios that seem all to possible.

John Dozer and Carmen are not easy people to figure out, and they have a past that ties them together in more ways than one. It takes monumental effort on both their parts to get beyond what happened to them to begin to forge a future for themselves as a couple.

Carmen is prickly. That's the best way to describe her. She's been hurt in the past by John and because she was young, she ran instead of dealing with it as an adult and communicating. Each time I read about her reacting to John as though it was nine years ago, I flinch. So many years wasted because of a stupid misunderstanding and the lack of communication. This sort of thing pisses me the heck off. It's a cop out but I also understand why Ms Rowe did it. Carmen was very young. She needed time to grow up and come into her own and become the strong woman she today, capable of being the Head of Infectious Diseases at the CDC. In their nine years apart, she's grown into a confident, competent woman, a decisive leader, and a compassionate woman, dedicated to the people she serves. That said, I had a hard time warming to her because she was reluctant to let John explain himself, unwilling to forgive, and held a grudge. She held all of their past against John and used it as an excuse to push him away. It takes extreme circumstances and a long time for her to finally realise what a waste of energy and effort her unbending stance was.

John, on the other hand, is a neanderthal. He's dominating and protective, and there's nothing he won't do for Carmen. He's utterly dedicated and devoted to her and he will put himself in danger every time to protect her. He has a hard time trusting she can take care of herself because he's so focused on being the one in the line of fire and keeping Carmen safe. I loved his single-minded focus on her well-being but I can also understand Carmen's frustration. It's hard to be independent when your man wants to wrap you in protective cotton wool. Still, I loved that John made an effort to explain himself, make amends, and get beyond their past. It bothered me that with John continuously putting himself in the emotional hot seat to work things out, Carmen kept shutting him out. Granted, they were also dealing with a national crisis at the time, but they had a few quiet moments to themselves too.

I love Ms Rowe's bio-terrorism stories but crikey, they scare the heck out of me. I keep reading them though. I really want the bad guys caught because for goodness' sakes, they are destructive mofos. They do make a fantastic read though so if you haven't read any of her books, I highly recommend them.
Read more
Helpful
Report abuse
See all reviews