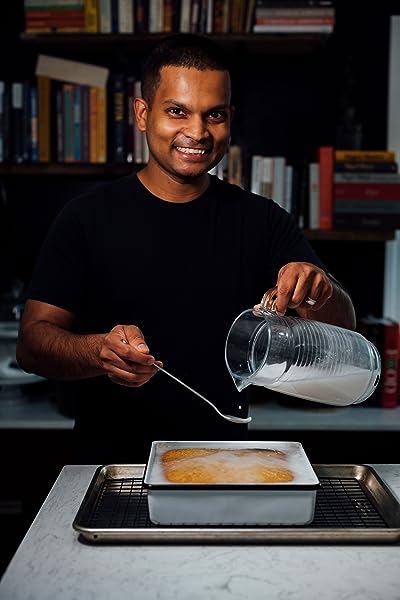 Season helps you bring new flavors from different culinary traditions into your own kitchen and make them work for you.

Chefs and home cooks have global palette of ingredients and spices to play with.

From aleppo pepper and serrano chile to Omani lime and pomegranate molasses, Season by Nik Sharma helps cooks navigate the abundance of spices that can be used to reinterpret classic beloved recipes. After all, seasoning is more than just a way to achieve flavor in the food we eat. It represents our desire to connect with our past, present, and future; it tells our story. And though we’re all different in many ways, our differences also bring us together at the table.

"A wonderful gateway book to Indian flavors, yet approachable for home cooks. Recommended for all collections."—Library Journal, Starred Review

"It's rare to open a cookbook and leaf through it in wonder at the flavor combinations. That's what Nik Sharma's book did to me: it's full of dishes that are crying out to be cooked and photographs that have a gorgeous dark elegance. Nik Sharma is a rare talent." —Diana Henry, James Beard award-winning author of A Bird in the Hand

"I chose Season-for its elegance, it ingenious marrying of compelling, global spices, and, finally, for the semi-calm that pervaded my kitchen as I cooked from it. That hard-to-define-or-describe thing that I love about food has been revealed to me, existing along the lines of strong, persuasive flavors and a feeling of semi-ease that these flavors engender in me. I loved the smell of my kitchen when I cooked from this book, and that made me want to linger at the counter and then, longer, at the table. I happily entered the doorway of Season, and stayed for the story."-Meg Wolitzer, author of The Female Persuasion, The Interestings and The Wife

"Every so often a title shows up that refuses to be cast aside, and Season by Nik Sharma, our very first Cookbook Club pick, is one of them. Flipping through Sharma's recipes for dishes like Chaat-Masala Grilled Pork Chops and Apple Masala Chai Cake will make you want to raid your own spice cabinet for the cumin, coriander, and cardamom (or perhaps go out and stock up on fresh spices, because yes, they go bad!). "—

"Mr. Sharma's food is quietly expressive, nodding to the flavors he grew up eating in Mumbai without chaining itself to tradition." —The New York Times

Named one of the Best Healthy Cookbooks Fall 2018 by MindBodyGreen

"[Nik Sharma brings] together Indian flavors from his hometown of Bombay with those [he] encountered when he moved to the U.S. There's apple masala chai cake, tumeric-and-chile-roasted red snapper with melon salsa, and curry leaf popcorn chicken inspired by his husband's Deep South roots, all illustrated with Sharma's high contrast photos." —Food & Wine

"This book is full of mouthwatering recipes that home cooks will actually make and dozens of Nik's breathtaking, low-light images that sit at the intersection of food photography and fine art. More than providing 100 thoughtful recipes, however, Nik encourages us to connect the dots between our cultural foods, memories, and cur­rent geographic location so we may also cultivate a way of cooking and eating that represent who we truly are." —Bryant Terry, James Beard award-winning author of Afro-Vegan

"This book from an important new voice-and eye-is positively enchanting, page after page. Nik Sharma seasons his food, his photography and his writing with the same ingredients: passion, creativity, and love. You can practically smell the cardamom, the jaggery, the shiso leaves, and you'll be left wanting to cook each and every recipe." —Joe Yonan, food and dining editor, The Washington Post, editor, America The Great Cookbook

Nik Sharma is the writer, photographer, and recipe developer behind the critically acclaimed blog, A Brown Table. His meteoric rise in the food scene has brought him two IACP Digital Media Awards and a Saveur Best Food Blog Award finalist spot. Nik's visual food column for the San Francisco Chronicle, A Brown Kitchen, runs weekly in print and online.

Page 1 of 1 Start overPage 1 of 1
This shopping feature will continue to load items when the Enter key is pressed. In order to navigate out of this carousel please use your heading shortcut key to navigate to the next or previous heading.
Back
Next
Pages with related products. See and discover other items: Turmeric Seasonings, Explore cages for cucumbers