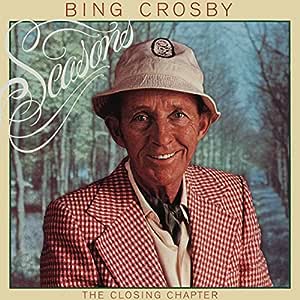 Bing Crosby Format: Audio CD
4.7 out of 5 stars 33 ratings
See all 10 formats and editions Hide other formats and editions
Includes FREE MP3 version of this album.&nbspProvided by Amazon Digital Services LLC. Terms and Conditions. Does not apply to gift orders.&nbspComplete your purchase to save the MP3 version to your music library.
Available at a lower price from other sellers that may not offer free Prime shipping.

Bing's final album, originally released in 1977, has never been available on CD, let alone with 14 bonus tracks. This deluxe edition features the original 12 tracks plus Bing's very last recordings, made at a BBC session three days before his death, and five poems recorded for fan clubs but never distributed.

G. Combs
5.0 out of 5 stars Seasons - Bing Crosby's absolutely finest work
Reviewed in the United States on July 8, 2017
Verified Purchase
The Seasons album of Bing Crosby is in my opinion his very finest work. His voice is clear and strong, and the notes are perfect in timing and pitch. No one could listen to this album, and judge from the sound of his voice that in just one month he would pass away. I listen to this album every week, and it is a part of me, very close. I have a large collection of Bing's music, but Season's is without any doubt, his finest crowning achievement in music. The following remark is presented in Season's liner notes, for those who doubt the Master of voice music. "...Crosby has nearly 400 entries on the best seller charts - more than Elvis and The Beatles put together - and has sold nearly a billion records worldwide." That's 1000 million albums, for those who aren't into BIG numbers. No one has ever matched Bing's importance in music or his number of fans. Get this music album, and your music life will be complete. I have no doubt about it. My favorite song on Seasons is Once in a While. It will get to you. You have my word on it.
Read more
4 people found this helpful
Helpful
Comment Report abuse

Nick Santa Maria
5.0 out of 5 stars Bing Sings
Reviewed in the United States on September 9, 2016
Verified Purchase
Bing was great right up to the very, VERY end. This collection features his final recording, ONCE IN A WHILE, and it's as poignant a goodbye as you'll ever hear. The greatest white singer of popular songs EVER!
Read more
Helpful
Comment Report abuse

Dr. P. H. Collins
5.0 out of 5 stars A great finale!
Reviewed in the United Kingdom on September 30, 2013
Verified Purchase
Had the vinyl version of this album since 1977 and taped the BBC recordings off air that Christmas but good to have them all together so conveniently on this CD. Crosby's voice never failed him, indeed there are some who say that it got better and better. He found and afinity with British conductors and arrangers too - such as Pete Moore - who produced these last sessions. The BBC recordings were made just two days before Crosby died - you can't tell listening to them. What could have been a ghoulsih album and sessions is in fact quite a joyous one. Highly recommended.
Read more
Report abuse

Svein Johansen
4.0 out of 5 stars Bing the great
Reviewed in the United Kingdom on May 19, 2013
Verified Purchase
A beautyful album from one of the biggest crooners. His last record, but his voice as good as ever. Buy it.
Read more
2 people found this helpful
Report abuse
See all reviews
Pages with related products. See and discover other items: bing crosby